Finally, a robot company with a knack for producing a great online trade show

“You can still experience the event that rolled through 3 continents within 2 days.” —OnRobot
3 continents in 2 days! Try that with a tradeshow booth.

We gave the expo 4.5 robots out of 5. Our highest score ever!

In search of quality
As a former broadcast TV producer, I’ve been closely watching the robot ecosystem as it goes online with conferences and trade shows during the COVID blockade of live events. With the familiar live trade shows and conferences kaput, the industry, at first frozen with inaction, woke up to the online world and haltingly began putting on events.

Fascinating it was to watch their attempts at going online.

I was hoping to encounter something interesting. Something that displayed a good feel for both audio and visual elements blended together with some of the cool things you can do online these days. Little dabs of TikTok or YouTube creativity would be most welcome. Something other than a talking head droning on and on to his or her PowerPoint deck.

Some online events displayed potential, but in the end, nearly all were regrettably bad. Most felt like a cross between a webinar and a podcast. In fairness, jumping in up to your neck in the online show space is hard to do if your world has been a face-to-face affair of set venues and draped-off booths. After months of trying, some vendors and show producers are still struggling to make the digital jump.

However, after six months of eye-wearying toil hoping for a champion to arise, one finally did… 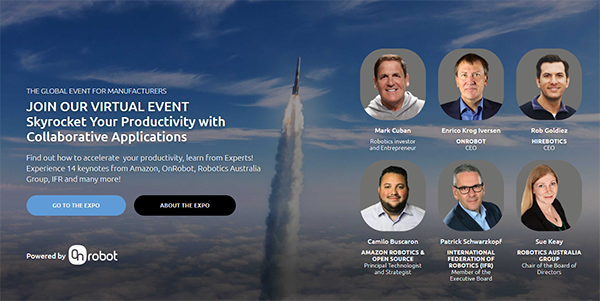 Kudos to OnRobot and its recent expo; they’re finally getting the hang of well-designed, skillfully-run online tradeshows. The company recently concluded a 2-day event that aired Dec 2 – 3. It was loaded with remarkably worthy content that was interesting, engaging and well presented. That in itself is extraordinary for most trade shows and conferences, whether online or live.

Online you can click away from boring content; at a live event you’re stuck, unless you gracefully exit, all the while feeling ripped off by the dud speaker at the podium.

Yes, OnRobot’s expo was also mostly a lineup of talking heads with PowerPoint, but their content was what set them apart. It was that good. 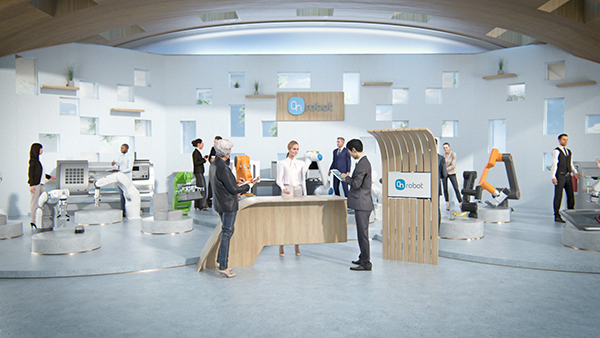 As OnRobot billed its event, which panned out to be true: “The OnRobot Expo will provide visitors with expert-led 30-minute presentations on a massive range of topics from lean manufacturing and collaborative packaging applications, to fast loading CNC solutions and how manufacturers can break down barriers to vision system adoption.”

Iversen is a showman who knows how to please an audience, and it was displayed in the production values that the expo presented.

He must have a good sense of the consumer in all of us, that inner critic in each of us who looks for a good product that is well presented.

His expo will probably go down as best of 2020. 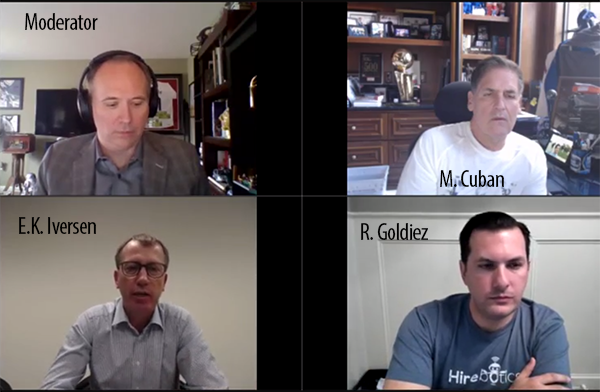 Lots of additional praise for the expo is due to whoever vetted the speakers, both the individuals who presented as well as their content. Every presentation was excellent; some worthy of a reprise, which you can easily do because the content is archived online. Go here for the list.

Getting the right speaker and content mix is hard to pull off; I did it twice and was never satisfied with the lineup and content. That’s my bad!

OnRobot also had a globally, well-known headliner to attract attention, which is unheard of in any online robot program I can recall. Mark Cuban billionaire (net worth $4.3B), Shark Tank, Dallas Mavericks, and robot afficionado drew lots of online attention to the event; plus, he was there in person contributing to the content flow. Such an in-person appearance by Cuban has pull enough to bring to the party many more than the usual suspects for a robotics trade show.

Whatever OnRobot paid for Cuban’s services was well worth it.

For me, any event that has a speaker bringing Polanyi’s paradox into his 30-minute piece, which Patrick Schwarzkopf did, is a big winner. Humans, Robots and Polanyi’s Paradox. …Sweet! 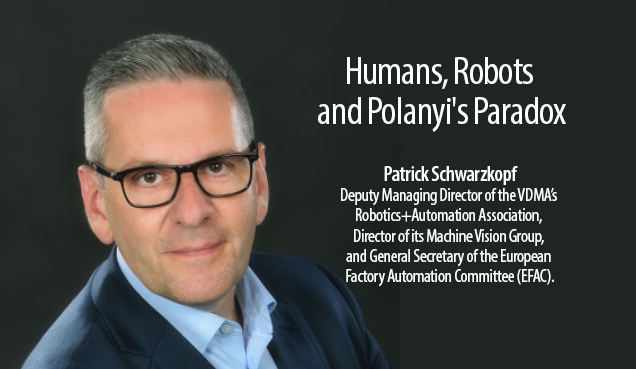 In fact, I’m headed back to the archive to re-screen the presentations. The resident content is teeming with some really cool ideas for news articles and general industry research.

Pre-event advertising and promotion for the expo was slickly appealing and interesting, which has a lot to do with the ever-resourceful and talented Mette McCall and her McCallMedia crew promoting the expo seemingly everywhere.

For us, the Onrobot Expo was a marked success. We gave it a grade of 4.5 robots out of five. It would have scored the other half robot if OnRobot had figured out a way to serve lunch. Maybe a downloadable coupon! Seriously, food draws a crowd.

Give the OnRobot Expo a look-see; you may want to give it five out of five.