China Stocking Its Cupboards in a Hurry

The “denial order” that hit ZTE was a major wake-up call. What if there are more on the way? Can’t have automation if there’s nothing for robots to make

“China is stockpiling every kind of commodity at a ‘mind-blowing’ rate,
with the country’s imports propping up an overall fall in trade volumes globally.”
—Patrik Wheater, Seaborne Communications

The eye opener
In 2017, ZTE was given what’s called a corporate death sentence — a “denial order” that would prevent any U.S. tech company from supplying components to it for seven years.

“No one believed ZTE could survive without access to U.S. suppliers. As the Asia Times noted, the U.S. action can be seen as an example of…“weaponized interdependence,” the use of global networks (in this case technology supply networks) for coercive purposes.”

What if the industrialized world collectively issued a “denial order” on everything China imports? What if this “weaponized interdependence” was used to coerce China from its South China Sea claims or to thwart its aspirations to repatriate Taiwan? ZTE had been the test case. Now the weapon could be used across the entire gamut of China’s critical imports; and there are many without which make China very vulnerable.

The threat of denial orders must keep China’s leaders up late at night making lists of must-have commodities. Including the ingredients that robots use to fabricate most everything they touch. Blind-sided by ZTE, they must ensure that it doesn’t happen again. The country’s need to automate in order to remain productive for its people will go nowhere fast if there’s nothing to make into goods.

Food comes quickly to mind. Within China’s borders live 20 percent of the world’s population, but only 10 percent of China’s land is arable and the country has barely 7 percent of the world’s water.  There’s even a chunk of China the size of the United Kingdom that has been poisoned by industrialization. Yes, China’s massive food imports might be a prime target for a denial order.

As a hedge against another ZTE event happening anywhere, China is restocking its cupboards at a furious pace and spending billions to do it. A virtual conference organized by the Association of Bulk Terminal Operators (ABTO) discussed the speed, extent, and ramifications of what is taking place, and the enormous, far-flung supply chain that China is building out to accommodate the restocking.

Patrik Wheater of Seaborne Communications provides the following glimpse of the ABTO goings-on.

“Chinese conveyor belt”
China is stockpiling every kind of commodity at a “mind-blowing” rate, with the country’s imports propping up an overall fall in trade volumes globally, bulk terminal operators and shippers were told last week at a virtual conference organized by the Association of Bulk Terminal Operators (ABTO).

In an introductory presentation to kick off a series of seminars on the Impact of COVID on Bulk Markets and Terminal Operations, BIMCO’s Chief Shipping Analyst, Peter Sand said: “There is one nation at the center of the universe [for the bulk shipping industry] and that country is China.

“If you see the impact of China and its stocking up of basically every kind of commodity, but for coal, it is mind blowing. And it is not only the volumes; it is also the distances. China is basically grabbing whatever it can from all over the world.” 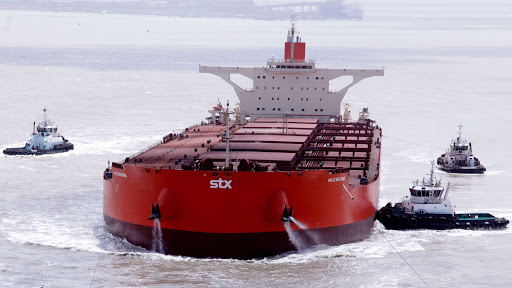 Sand said that China’s “craving for agribulks”, in particular, is having a “very positive” effect on the dry bulk sector, which is shifting short haul trades to long haul trades.

“If we go by Suez Canal transit numbers, we have seen a 26 percent increase in the first three quarters of the year, I mean, that is mind blowing in many ways. It also illustrates the purchasing power of China. We know China has the muscle, but from the stimulus packages they have, it did not look as if the dry bulk sector would benefit to this extent. It is absolutely second to none.”

However, the dominance of one country can be problematic. Sand warned that some bulk terminal operators and shippers may not benefit from the growth in trade volumes as China looks to establish what he called the “Chinese conveyor belt,” – China’s own fully-formed supply chain.

Commenting on trade relations with China, he said: “After three years of the trade war, the US has seen the highest export of soya beans in its trading history. Following years of disruption, the first seven weeks of the 2020/2021 marketing year, which runs from 1 September to 31 August, have seen the strongest exports ever.”

The US is now exporting 80 percent of its entire soya bean production to China. In the 2018/2019 marketing year, not one bean was shipped to the country.

In the day’s second presentation, Rahul Sharan, analyst at shipping consultant Drewry, informed ABTO members and delegates that dry bulk growth rates over the next five years could be similar to that recorded over the previous period, depending on individual countries response to COVID, but also emphasised China’s importance in keeping bulk trades moving.

“As Peter was saying earlier, China is going to lead everything. We are expecting some growth in China’s food production and expecting improvements in iron ore imports to feed China’s steel mills and build up inventories,” he said.

However, coal trades will decline. Commenting on the trade between Australia and China, Sharan said the completion of the rail network between Mongolia and China in 2021 “threatens to bring the trade down”.

“The second phase of the railway will expand to Khorloogiin Choibarsan in east Mongolia, establishing a direct connection with Russia, thus reducing the cost of coal trade between Russia and China.”

Russia exports around 30Mt of coal a year to China, almost 80% of which is transported by sea from the port of Vostochny, (about 1000nmiles from Qingdao). The move from sea to rail is expected to reduce the shipping demand by 25-30 billion tonne miles from 2025.

In the final presentation, Basil Karatzas, CEO, Karatzas Marine Advisors & Co, said that given the number of permutations of how life, and business and ultimately shipping will be affected [by the COVID pandemic], “we have to hope for the best but be prepared for the worst”.

“When combined with ‘trade wars’ and ‘re-shoring’, COVID has the potential to impact negatively on the shipping industry because of the lower demand. It is a driver for re-thinking supply chains as a ‘just-in-time inventory’ is not a panacea anymore.

Most interesting in the mix may well be the appearance of “China’s own fully-formed supply chain.”