The Beginning That Changed Everything

Late October again
It’s the end of October and time once again to celebrate the beginning that took place late in this month in 1949.  It’s when our digital age first cranked into being, when mankind’s first-ever, real-time digital computer sang out its binary siren’s song and first called the world to go digital along with it.

Late October makes this computer a Scorpio, known to be “fiery and passionate to assert its power over others and has an undying need for dominance.” Yup, that’s digital computing all right.

The very next month, November, the same machine poked a first-ever hole into the Infosphere and put on the first practical application and use of information theory. Norbert Weiner and Claude Shannon had just given new, technical meaning to words like communication and message, and this digital wonder machine opened the door to Information Technology.

The machine was conceived and built by a rowdy team of young, no-name engineers. But, if one individual can be singled out as the driving force behind the project and the team, that individual would be Jay Forrester, the gangly kid from Nebraska who put in a 78-year career at MIT. Nearly eight decades of continually stamping his presence on the modern world he helped to create.

In 2015, a year before Jay’s passing, the MIT Technology Review put out an article titled The Many Careers of Jay Forrester. A wonderful commemorative piece to re-read every late October since.

As the writer of that article said of Jay, “Forrester’s 76-year MIT tenure is even more notable for its breadth than its duration. He helped develop digital computing. He oversaw the creation of a national air defense system and helped launch MIT’s Lincoln Laboratory. Then he joined what is now the MIT Sloan School of Management and founded the field of system dynamics, which examines complex business, economic, and environmental systems—and the unexpected feedback effects human activity creates within them. ‘I’ve had several careers,’ says Forrester, who turns 97 in July. ‘Starting with ranch hand.’”

Next October, we hope to celebrate Jay and his gang of Barta building buddies in an 8-episode podcast. We’re looking very much forward to painting sound over the storyline that Tom Green created in The Untold Story of Everything Digital. 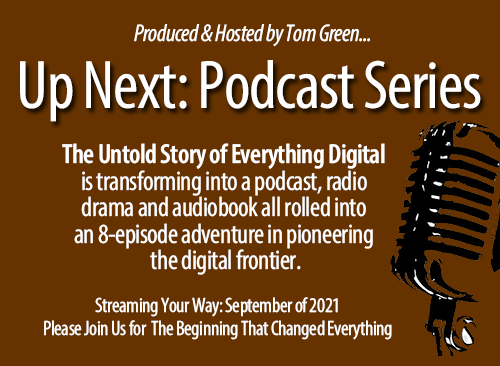 In the meantime, please help yourself to a free PDF book sample…HERE