Data Era leaders: 38 first-adopters of data and digitalization tech reaping the benefits of improved productivity…and looking for more. So too are their suppliers!

What, no smiling emoji
Analytics Insight used a kind headline to deliver its grim automation forecast (October 3): The Demand for Industrial Robots Has Decelerated. Others disagree. It appears that “demand” for industrial robots has increased; sales have not. Sales have more or less cratered; or, euphemistically, have decelerated. However, even with sales flatlining for a while, they too are on their way back. Sales these days, like William Gibson’s quote about the future, are there but just not very evenly distributed.

And that’s the key as to why they are on their way back.

Nothing succeeds like success
Morgan Stanley (MS) analysts* took a “fresh look” at U.S. companies that are “creating value through investments in technology.” 38 companies stand out at the cutting edge of what is called the “Data Era” productivity boom, where first-adopter companies are witnessing strong returns, and are looking for even more tech. Suppliers and partners to those 38 are also trying to keep pace with their customers, and their own competition as well. Therefore, they too are thinking digital transformation.

As the MS analysts put it: “We are in the early innings of a technology-driven, decade-long investment cycle centered on data and digitalization that allows businesses to gain insights, improve business outcomes, and drive productivity.

38 companies stand out as particularly adept at embracing the transformation, investing heavily in the requisite technology, and are now realizing marked success from that decision.

“Productivity is especially low in discretionary service sectors, like restaurants and hospitality. If rising consumer risk aversion and small business loss means fewer restaurants and service sector establishments overall, the sectoral composition of the economy could shift in a way that the US economy becomes comprised of more productive industries. And even the unproductive sectors have been forced to adapt, as COVID has begun to help accelerate productivity gains in service sector industries that are moving to online platforms.”

A robust product pipeline and continued advancements in technology suggest that penetration should continue to accelerate in the coming years – particularly as the company looks to commercialize its ‘See & Spray’ product in 2021/2022 (which can reduce farm chemical costs by ~40-50%, on average).”

“Importantly,” MS analysts contend, “the transition to the “Data Era” is accelerating as technology is the glue underlying many of the major business shifts during COVID-19 (like e-Commerce, e-Services and collaboration tools).

“The Great COVID Recession (GCR) is a wake-up call to accelerate this digital transformation as companies with a greater digital presence are showing more resiliency in the wake of the pandemic, and convincing more industries to become increasingly digital and leverage technology to either defend share in a new reality or take share in new opportunities.”

McKinsey is quick to second the MS outlook: “The challenging economic outlook and continued uncertainty 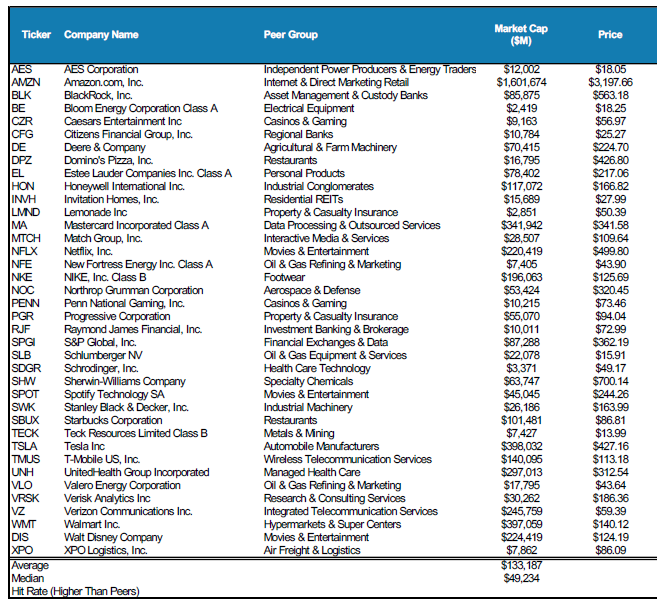 Stanley Black & Decker in a nutshell:
“With Industry 4.0, Stanley Black & Decker is developing solutions to digitize and automate its manufacturing, which includes using artificial intelligence and advanced analytic tools to more effectively and efficiently run the plant system in an effort to improve planning and response times for plants and customers. MS sees significant productivity gains from this initiative as it relates to the shortening of supply chains.

“While nearshoring as a theme has gained popularity more recently as a result of the pandemic, this has been a priority for Stanley Black & Decker dating back several years, given the significant tariff headwinds they faced in 2018 and 2019.

are forcing CEOs to contemplate some difficult choices. Some are pulling in, making cuts, and focusing on riding out the storm. Others, however, are taking decisive action to make sure that when the crisis ends, they’ll be stronger than they are today.

“Research and experience show that those acting with a through-cycle mindset will be best positioned to accelerate out of the downturn. In the recessions of 2007–08, the top quintile of companies was ahead of their peers by about 20 percentage points as they moved into the recovery in terms of cumulative total returns to shareholders (TRS).

“Eight years later, their lead had grown to more than 150 percentage points. One key lesson from that experience is the companies that move early and decisively in a crisis do best.”

Here’s the rub, according to McKinsey, when it comes to CEOs and their firm’s digital transformation: 97 percent say that they want to jump into the pool; some 60 percent of those gave it a go, but only 29 percent have been reasonably successful.

More importantly, which companies out of the 29 percent have aced the final exam in digital transformation? Which are prepared, vis-à-vis their competition, “to either defend share in a new reality or take share in new opportunities.”

Well, Morgan Stanley assembled 38 U.S. publicly traded companies considered early and robust adopters, and then broke out each with a sensible analysis that others may to try to emulate…if they have the moxie.

Follow the verticals
The warm feeling in terms of sales is that all 38 are committed to automation, spending, and seeing results. And each will spend again if a better result is at hand. Sifting through the list of 38 there are a number of automation targets that pop out. John Deere, for one. Then too, if Deere is in the game, what about its peers? Follow the vertical. How robust and determined are Case New Holland, Kubota, Volvo Group, Claas Group, etc.?

Then again, Deere has partners and suppliers who want to continue their favorable relationships with Deere, so somewhere somehow, they too will need to seek out a digital future of transformation. Deere has over 60,000 suppliers! For example, McGregor Metalworking Companies is one of Deere’s largest suppliers; how does its future look? This past April, the 50-year old Ohio metalworker’s COVID-impacted sales were “75 percent LESS than planned.” Ouch!

Yet, as McKinsey points out: Is McGregor “taking decisive action to make sure that when the crisis ends, they’ll be stronger than they are today.”

Although purchases of automation tech may be zero at this time, demand is there. Everyone wants to be ready for a future that needs to keep pace with its customers. We know, from the MS analysis, that Deere is ready, and will obviously want its suppliers to be Data-Era-ready as well.

At the industry level, reports MS, many analysts already see a range of early evidence suggesting business models are shifting in anticipation of permanent shifts in consumer tastes and preferences, accelerating trends in e-Commerce and e-Services, and wider adoption of productivity-enhancing technologies like cloud computing, collaboration tools, automation, and data & analytics.

“Stanley has already started testing its US manufacturing capabilities in a facility in North Carolina. At this facility, using Industry 4.0 automation the company has demonstrated the ability to reduce head count on a power tool assembly line from as many as 20+ employees down to ~5 employees.”

XPO Logistics, Inc. in a nutshell:
“MS sees XPO as the most technology/eCommerce exposed growth company within Transportation with a focus on warehouse automation, the digital freight marketplace, data science, and customer visibility tools – which should help drive above peer organic growth over the long-term. XPO should also benefit from the ongoing cyclical rebound and M&A should be a positive catalyst over time (even if it is not the priority for the moment).

Cash to spare, if…
Every one of the 38 companies, just to stay in the game, has a sales nugget or two or more to toss at automation. Peer competitors in each of the verticals should as well, if they aspire to be frontrunners in the vertical. Or will each just acquiesce to
Deere’s leadership or to whoever else is tops in each of the verticals? Settling to be less can be dangerous for a company’s health.

MS is looking for a major post-COVID bull market to rise up. As MS stated above:
“We are in the early innings of a technology-driven, decade-long investment cycle.”

Industrial robots, cobots, professional service robots, and other automation tech are the means for all companies to gain entry to Data Era citizenship. What MS calls “the glue” to transformation and Data Era productivity. That’s a truly enviable and powerful position for any automation company, and carries with it a lot of responsibility to its customers.

The key to selling automation is not how many robot arms or AMRs can be sold or how well you can configure a customer’s robot work cell. Rather, how can an automation tech vendor help a post-COVID business to thrive in the “Data Era” productivity boom that’s settling in around us.

*thanks to Morgan Stanley for research insights