Only one sure way for warehouses to decrease operational costs and optimize productivity: remove workers from the equation

Time runs short
In the end, when robots succeed in pushing humans out of warehouses and DCs, it might not be because of their brawn or endurance or their exactitude…or even their zest in doing for their masters the dull, dirty and dangerous jobs that everyone talks about.

Intelligence might well be the ultimate reason. In a world of moving goods around—in one door and out another— logistics robots will simply be smarter than humans at doing the two things that matter most to humans: decrease operational costs and optimize productivity.

How can it be that humans are on the way out, goes the argument, when Help Wanted adverts show Amazon in pursuit of 175,000 new workers, Walmart hoping to onboard 50,000 workers for its distribution and fulfillment centers, FedEx with a ditto for 35,000 newbies to don purple and orange, Dollar Tree for another 25,000, and tons of others screaming for full-time warehouse workers at $15 per hour; full-time pay that barely covers full-time rent and food.

Already getting outfitted bit by bit with intelligent assets, logistics robots are being quickly groomed for the takeover. Yes, it’s still years off, but no one, especially today, can look ahead to a 20-year career as a warehouse laborer.

The early days (2012) of Kiva robots working Amazon distribution centers is gone. The arduous and inflexible hard programming of logistics robots to do even the simplest of chores is vanishing. Artificial intelligence/machine learning, sensors, and edge computing have opened up a new world.

Daniel Gwak, co-head for AI Investments at Point72 Ventures, who has done fair bit of analysis on warehouses, sees AI as a key enabler for the supply chain industry. “Ecommerce industry growth,” he says, “is driving the need for more warehouse automation to fulfill demand, and AI-driven robots can deliver that automation with the flexibility to scale across varied workflows.”

The more goods that humans order on their cellphones and laptops, the more intelligent automation needs to be utilized to meet the demand, which means the more “offboarding” of humans who will be replaced by smart robots. And that’s only for the physical part of moving goods from point A to point B.

The brainy add-ons are the real coup de grâce for the end of humans in warehouses. Robots like Locus Robotics (founded 2014) and its AMRs (Automated Mobile Robots) the LocusBots are a huge step up in AI-driven logistics. With built-in barcode scanners, label printers, and environmental sensors that expedite order processing LocusBots  and their kind are the future. Together with LocusServer that teaches LocusBots the most efficient warehouse routes to travel or provides real-time performance data, order and picking information, productivity, and robot status.

Unlike a human, when a new LocusBot gets onboarded, there’s zero learning curve; it instantly knows inventory status and item locations. It tracks “hourly pick data, daily and monthly pick volume, current robot locations, and robot charging levels.” It even sends human workers to their next location to use the only thing that humans still have going for them: arms, hands, and general intelligence on how to pick things out of a bin and place them with a LocusBot. 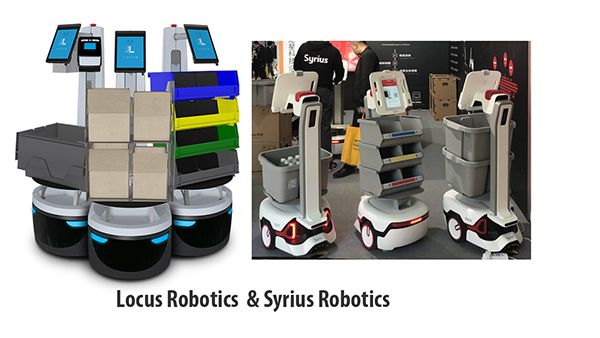 A Locus clone of sorts, the AMR from Shenzhen-based startup Syrius Robotics (founded 2018) is another “smart” logistics robot. Adam Jiang, the company’s founder, calls them “thinking logistics robots”.  Unlike other AMRs that “move along preset paths marked out with magnetic tape or other lines on the floor” these AMRs navigate on their own. “Each has an artificial intelligence chip and can determine its position by analyzing images of its surroundings and operate in harmony with other robots by communicating with them. 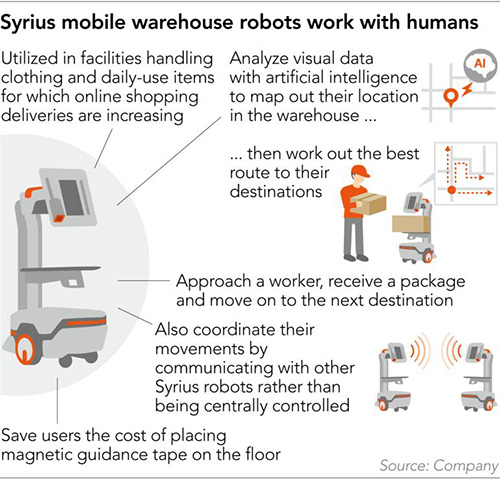 Like LocusBots, Syrius Robotics’ AMRs automatically transport items that a worker places onto them, bringing them to a specified location…and can process data on their own without waiting for instructions.”

Although a newbie, Syrius has attracted significant interest very quickly. In addition to raising $11.2M in funding over 3 rounds (the latest in May 2020), April saw the company selling its machines in partnership with Mitsubishi Corp. (40 units delivered to date) and 80 units to mega logistics king JD.com, owner of 730 warehouses. One’s tech has got to be substantial to attract bigtime stars like Mitsubishi and JD.Com, and one’s brand of brainy logistics has got have a substantial future in order to attract investors like Sequoia Capital and ZhenFund.

It’s been reported that barely 20 percent of China’s two million warehouses have been modernized, mostly the big ecommerce players in eastern urban cities. The future for Syrius could well be spectacular if Jiang can scale to meet the demand. If speed to market is any criterion to success, Syrius has got a knack for it: “Syrius took six months to design its first model AMR, and in another seven months shipped the first batch of products to a client in Japan.” That’s fast!

Locus, evolving its brainy machines since 2014, is also ready for blast-off; it recently pulled in an investment of $40 million to go global.

And, according to ABI Research, the world of warehousing and logistics is more than ready.

ABI Research is forecasting 4 million logistics robots to be deployed to more than 50,000 warehouses around the world by 2025, up from just under 4,000 warehouses in 2018. Driving such a spectacular forecast: scarcity of warehouse workers, a growing stable of infrastructure-light logistics robots (like those from Locus Robotics and Syrius Robotics, and a posse of others), falling prices for robots, decent ROI, robots offer their services on a wide variety of subscription plans (like RaaS or Robots as a Service), and, of course, the Amazon-created monster…same-day service.

Quick, smart, flexible, affordable, and infrastructure agnostic seem more important than brawn; and intelligence is at the bottom of it all.

Just as Universal Robots (UR) set the standard for cobots, and spawned a half-dozen look-alike cobots, Locus seems to be doing a ditto.  The UR look-alikes all have differences—some major differentiators—but enough collective similarities remain to be the basic definition of what cobot is. Syrius is the first for Locus, but it won’t be the last.

The next major add-on for both Locus and Syrius might well be an “intelligent” arm to pick and place, which is the big quest still outstanding for logistics robotics to conquer.

That quest was neatly summed up in an Evan Ackerman interviewing Pieter Abbeel, co-founder of Covariant.ai (formerly Embodied Intelligence), who just happens to be in pursuit of such an arm. As he calls the task: “Reliable picking that adapts to any SKU, learning on the fly.”

Abeel says that in all warehouses there are two categories of actions that need automation: “The things that people do with their legs and the things that people do with their hands.” Things done with legs, he says, have a decade of tech behind them, and that the leg category in logistics automation has been well-addressed by many. “The pressure now is on the hand part,” he says. “It’s about how to be more efficient with things that are done in warehouses with human hands.”

Imagine what both Locus and Syrius could accomplish in a warehouse with a dexterous, telescoping arm attached to their bots?

One thing is for sure. Help Wanted adverts seeking warm bodies for warehouse laboring would begin to diminish in a hurry.