When old school becomes new school
When it comes to artificial intelligence and machine learning (AI/ML), the Japanese struggle.  Other than Preferred Networks, purveyor of deep learning tech, it’s difficult to name another in Japan. Softbank founder, Masayoshi Son, has warned that Japanese businesses are falling dangerously behind in applying artificial intelligence.

It’s equally strange that Japan, the maker of more than half of the world’s industrial robots, doesn’t have the knack for making a cobot that can compete with the best of those from the EU, China, Taiwan or Korea. Kyoto-based OMRON, for instance, uses a Techman cobot arm (Taiwan) aboard its mobile robot.

Given such a gaping hole in industrial prowess with new-age AI/ML and cobot tech, it might then seem that Japan Inc. must be somewhat stunted when it comes to making things in factories, especially electronics.

What Japan might lack in advanced tech skills, it makes up for with “monozukuri” the centuries-old passion for the art of making things. Monozukuri in Japanese literally means “making things”, but with a huge dollop of “always striving to make things better” heaped atop. SONY’s automated Kisarazu plant, bristling with Mitsubishi robots and only four people, is an amazing example of new-age monozukuri in action. Throw in Japan’s national passion for robots, and you’ve got something very special happening. 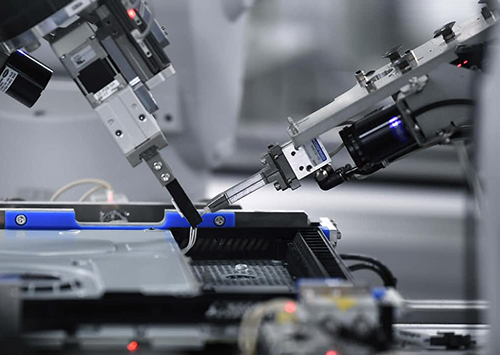 The factory churns out tens of thousands of PlayStation 4s using 31 robots and four people…two people at one end of the manufacturing line feeding in bare motherboards, and two at the end of the line packaging finished consoles. Sleekly crafted PlayStation 4 consoles pop out for packaging at the rate of one every 30 seconds (each retail in the U.S. for $300).

“If you keep watching them long enough, they will start to look like humans,” said one SONY engineer. Unlike large robots that lift heavy items, the delicate movements of compact robots resemble those of human arms and have surprising warmth. Probably there is no other production site that uses this robot this efficiently,” he said.

With that kind of sentiment, it probably means that the four remaining workers are not long for the world of SONY paychecks.

At one time in Japan’s history, monozukuri was all about the craftsman and his hand tools, as in the product being an extension of the artist. These days, monozukuri has new tools: robot tools tied to the “art of striving to make things better”.

The craftsmen, SONY engineers, have deftly woven together robots and automation into a self-running factory. Ultimately, it’ll serve as a model for other factories, especially the extra-difficult to automate electronics factories. SONY, to its credit, trusted it engineers with a big job. In 2019, PlayStation was SONY’s top earner, and already the PS4 has topped 100 million units sold. That’s a lot of trust.

However, at some point in the not-too-distant future monozukuri will need to embrace AI/ML as new tools. Given Son’s warning about Japan falling dangerously behind in applying artificial intelligence, will monozukuri cozy up to the new tool?

As a side note, all that PlayStation “popping out for packaging” has packaged up for SONY a cool $93 billion in sales ($9 billion in profit) since PlayStation debuted in 1993.

If money is any motivation in grafting AI/ML to monozukuri as quickly as possible, then PlayStation profits should be inspiration enough to marry the pair together sooner rather than later. It is, of course, what Microsoft will do with Xbox.

China, how does your garden grow?

$170 billion to get things rolling
China’s 5G garden, half planted and fertilized already, is in store for more goodies ($170 billion in direct payments and slated to generate another $2 trillion in investment) beginning in 2020 and extending into 2025. All of which bodes well for robots, automation, artificial intelligence, communications, the cloud, smart factories, and for making existing mega-cities smarter as well.

Tall order from the lips of Prime Minister Li Keqiang, who usually means business in a very serious way when he makes these kinds of announcements. His recent call for “new infrastructure initiative” is actually a throwback to late 2018 (the trade war had begun the previous July). He was serious then; he’s even more serious now. Back then there wasn’t a rural unemployment threat like the 6 percent one going on these days, or COVID, or an economy that’s far from its hoped-for 6.8 percent GDP growth. “The International Monetary Fund in April forecast China’s GDP will grow just 1.2 percent for the year.”

“New infrastructure initiative” really means all things 5G, with an aim toward technological superiority, which, China believes, will catapult it ahead of the U.S. as the world’s preeminent high-tech leader. Moreover, it will also help shake China’s dependence on foreign parts and supplies, which must was particularly galling in the wake of the ZTE sanctions (2017).

Nina Xiang, founder of China Money Network, has put together a scorecard of contrasts between U.S./China 5G preparedness:

“China is already winning in the critical 5G arena with planning, investment and execution. While wireless spectrum was quickly reallocated for 5G in China, it took an extra year or two for the U.S. to allocate its spectrum.”

For example, small to medium-sized enterprises (SMEs) that may otherwise be unable to afford expensive data center infrastructure will utilize a coordinated central platform, as with Shanghai, where over “60,000 SMEs are able to tap into the city’s industrial internet platform to transform their operations.”

The new infrastructure initiative is different from but will complement “Made in China 2025”, which was a plan to “reduce the country’s reliance on imported components and strengthen its know-how in high-tech manufacturing.” A key component of “Made in China 2025” was “requiring factories in China to purchase at least 70 percent of core components from local suppliers by 2025.”

“China’s top priority is to ‘stabilize the economy and stabilize the growth’ following the economic and social impacts of the coronavirus. At times like this, infrastructure projects are the quickest way to lead domestic investments and create jobs,” said Kelly Hsieh, an analyst at research house TrendForce who monitors China’s 5G infrastructure. President Trump’s call for $1 trillion in infrastructure (bridges, roads and other hard infrastructure) is a similar move towards stabilizing it’s COVID-wracked economy.

See below for China’s investment priorities, all kicking off in 2020 for five major cities and their surrounding provinces. 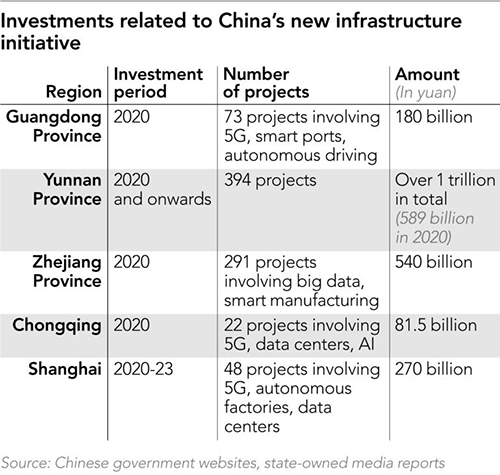 Money and opportunity for supply chains headed south
Supply chains that exclude a link to China are being put together in a hurry. Some countries are witnessing a bit of “reshoring” taking place, most notably in the U.S., Japan and Taiwan, but Southeast Asia, in the mix for decades with easy proximity by both land and sea for doing business, is looking better with each passing day.

“More abrupt and unexpected than the U.S.-China trade war,” notes Alicia Garcia-Herrero, Asia-Pacific chief economist at Natixis, “the Wuhan coronavirus outbreak has become a wake-up call for international companies about the risks of excessive dependence on China.”

Complaints like these are on the rise: “A number of international carmakers, Nissan Motor and Toyota Motor have had to halt production at some factories in Japan because of the interruption in the supply of parts from China. Indian pharmaceutical companies have warned that their output is at risk from disrupted shipments of Chinese ingredients. Western manufacturers of industrial electronics complain they cannot get the Chinese circuit boards their machines require.”

Dissatisfaction, fear, and heavy financial losses are looking for ways to ease the pain. Could a solution be a few miles south?

Southeast Asia stands to become a prime beneficiary of many of those wake-up-call relocations. For example, this past April, Japan approved $219 million in subsidies for companies spreading out production to Southeast Asia. Japan has more funding in the offing, and is certainly not alone in eyeing Southeast Asia to rejigger supply chains.

So, who’s going to realize all or a sizeable piece of the $219 million?

These efforts come as companies based in the U.S., Europe and Japan consider moving their supply chains out of China.

“Open for Business” signs have gone up all over the 10-member Association of Southeast Asian Nations (ASEAN), although Vietnam, Thailand, and Malaysia seem to be the best positioned.

Here’s a thumbnail of what some of these ASEAN countries are willing to offer any newcomers (list Nikkei Asian Review):