Drones vs. Locusts: Technology vs. Plague

According to National Geographic, a desert locust swarm can be 460 square miles in size and pack
between 40 and 80 million locusts into less than half a square mile.

A small swarm, made up of 80 million locusts, can consume the same amount of food in one day as 35,000 people,
while a large swarm can eat up to 1.8 million metric tons of green vegetation, equivalent to food enough to feed
81 million people… asset damages are estimated at $8.5 billion. —The World Bank: The Locust Crisis

Plague within a plague
During the coronavirus pandemic, nations all over the world have been battling an invisible aggressor, struggling to maintain the health and livelihoods of their people. However, some countries have more than one detrimental breakout to deal with.

In what the United Nations (UN) calls an “international transboundary pest”, desert locust infestation has plagued East Africa, devastating agricultural communities across the region, including countries such as Somalia, Ethiopia, and Kenya. The UN has declared it the worst locust outbreak in a quarter of a century, as hundreds of millions of these grasshopper-like insects destroy local vegetation. 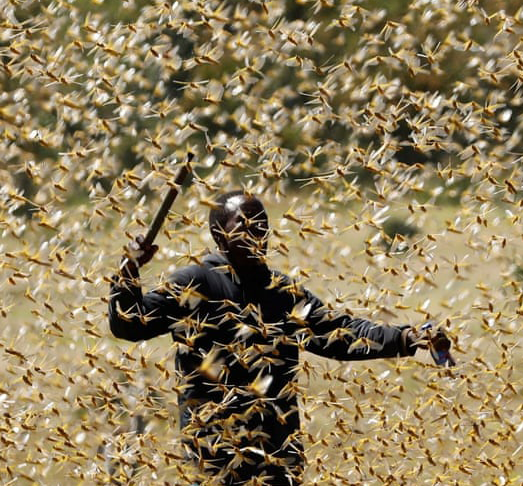 According to the Food and Agriculture Organization of the United Nations (FAO), a locust swarm of 1km^2 can consume the same amount of food in one day as 35,000 people. The disastrous impact on the local food supply is enormous, which is why containing the outbreak as well as implementing preventive measures is of high importance.

To date, local authorities have mainly relied on the aerial spraying of pesticides, but for a variety of reasons that will be expanded below, this method is no longer effective. Faced by an exacerbated hunger crisis, the UN will be testing drones against the infestation, using advanced technology to search, detect, and destroy these dangerous insects. A closer look at the desert locust, coupled with the faulty existing solution, highlights the urgent need for these drones.

What is this menace to humanity?
Desert locusts, or Schistocerca gregaria, are considered one of the most dangerous migratory insects in the world, especially with their ability to travel up to 150km a day. A swarm of desert locusts could fly from one country to the other in less than a day, while eating all the vegetation in its path.

Favorable conditions for boosting growth in fresh vegetation, like heavy rainfall and warm temperatures, are also ideal habitats for locust breeding, as well as prime targets for a locust feeding frenzy. Across East Africa, the vegetation-heavy areas that are vulnerable to infestation are incredibly remote, difficult to access, as well as environmentally unsafe, and the current preventive system does little to overcome these boundaries.

What is the problem
Currently, locusts are monitored by ground teams in four-wheel vehicles. Often, the areas under observation are several days’ drive away from the operations center, and these areas don’t have mobile or internet coverage. Hence, the time between observation and action against a potential infestation is ineffectively long.

Satellites are also used to detect areas of heavy rainfall or green vegetation, and these images are used to create routes to sharpen the monitoring process. However, some of these images suffer from omission errors and are often not available in time. Similarly, even though aerial surveys are the most internationally recognized method of dealing with locusts, they are often high in cost and are limited by their scarcity.

“Every county wants an aircraft, but we only have five at the moment and they can only be in one location at one time,” said David Mwangi, head of plant protection at Kenya’s ministry of agriculture.

Clearly, the existing preventive system is riddled with inefficiencies, but the proposed drones are aiming to provide effective solutions.

How can drones help against locusts?
HEMAV is a Spanish technology company that develops and builds drones. Through their work with data analytics and artificial intelligence (AI), HEMAV has successfully created a digital system that measures and collects biological parameters of livestock. They intend to take a similar approach to solving the locust problem.

“Nobody’s even done this with desert locusts before, so we have no proven methodology for using drones for spraying on locusts,” said Keith Cressman, senior locust forecasting officer for the FAO (UN’s Food and Agriculture Organization; see video above).

Potentially, the drones will be utilized in a four-step plan:

This will involve using a long-range, fixed-wing drone that covers a transect of about 50km to 100km. Using satellite imagery, the ground team will program the drone’s route, and the drone will use optical, multi/hyperspectral, thermal, and/or other sensors to identify and confirm vegetation. This data will be transmitted to eLocust3, a handheld tablet used for data acquisition by the ground team.

This will involve using rotary drones that capture low-level images of certain areas to detect the size of vegetation and presence of locust swarms.

Unmanned Aerial Vehicles (UAVs) that are mounted with hyperspectral cameras can provide more detailed imagery compared to satellites, up to 1000 ha in six hours. The automated system removes human errors in field observation and increases the speed of analysis.

The use of drones reduces the time between observation and action as data can be transmitted to local authorities in real time with heightened accuracy. This solution prevents humans from venturing into potentially dangerous, remote areas. Earlier detection will lead to earlier treatment while the size of the swarm is still low, while also reducing the amount of environmentally unfriendly chemical pesticide that has to be used.

Desert locusts are most vulnerable before they grow wings, which happens about five weeks after a locust nymph emerges from its egg. Wingless, they are still dangerous, as they move on the ground in vast streams seeking anything green to devour. However, it’s the prime opportunity for hunter-killer drones to destroy them. Once winged and airborne, millions of desert locusts are impossible to stop or even impede.

What are the difficulties of implementing drones?As with any technology, it has its drawbacks. Due to the size and battery life of drones, the volume of fuel and pesticide that can be carried on any flight is limited.

Additionally, many East African countries do not have the necessary laws that would allow for the importation, development, and use of drones, as well as the training of the necessary staff in their management.

Then too, drones will be used in harsh weather conditions. There will have to be an immediate local supply of materials that can be used to fix and maintain these drones, or this solution will not be feasible in the long run.

Is it just East Africa?
In Africa itself, swarms have spread to South Sudan. In the Middle East, countries such as Iran, Yemen, Oman, and Saudi Arabia have reported locust infestations, as well as Pakistan and India in South Asia.

Pakistan is facing its worst locust infestation in two decades, in the face of which the government has declared a national emergency. India is buying drones to develop the monitoring and preventive measures of dealing with locusts.

“Other than ensuring the availability of large quantities of insecticides, we’re buying drones and sprayers to beef up our readiness to deal with the attack,” a source in India said.

Millions of people across these countries are being impacted. Many are densely populated countries that are highly agriculturally reliant, which can result in them being more heavily impacted by food scarcity.

For millennia, the desert locust has been an unstoppable, highly destructive scourge on humankind. Now however, as the age of drone vs. locust dawns, Schistocerca gregaria may have finally met its match. 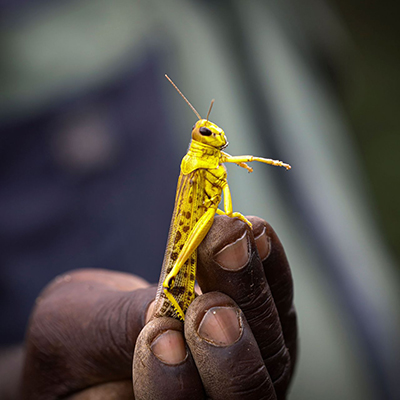