Service Robots & The Pandemic Next Time!

Will service robots make the deadline? They need help in order to help us

"Viruses are evolving to be better killers,
service robots must evolve to meet the deadly challenge."

“We may be done with the virus, but clearly the virus is not done with us,”
Dr. Rochelle Walensky, director of the Centers for Disease Control and Prevention

Harrowing timeline
“THAT frightening word “pandemic” is back in the news,” wrote economist Tyler Cowen in a New York Times (NYT) article back in 2013—seven years ago!

He was referring to that year’s pandemic of avian flu; and that bit about “back in the news” was Cowen looking back at the previous H1N1 pandemic from 2009, just about a decade ago. That 2009 pandemic was itself preceded by the new millennium’s very first coronavirus epidemic in 2003.

And here’s the Journal of Thoracic Disease tracking how it all began: “Before the emergence of SARS-CoV, the only coronaviruses that were known to cause human respiratory tract infections were HCoV-229E and HCoV-OC43, which accounted for 15-30% of the common cold, with severe disease being rare. In November 2002, an unusual atypical pneumonia due to SARS-CoV started to emerge in Foshan, Guangdong Province, China.”

That was the beginning of the journey to COVID-19. It seems then that every seven to ten years a coronavirus returns, each time with increased virulence for its victims and with a heavier economic toll for the world. $40 billion was the number for 2003; trillions wiped off the books is the number for 2020. And the human devastation this time around, well, the mortality rate for people and their livelihoods is downright staggering.

Place of origin for the pandemic next time? Probably in China. South China, more than likely. A very recent British study has traced COVID-19 also to Guangdong; the report theorizes that COVID-19 was transported from there 600 miles north to Wuhan. As TB, Ebola, and HIV are native to Africa; novel coronaviruses seem to be native to China. TB and HIV have already escaped to infect millions throughout the world, as have the coronaviruses. Africa now needs the world’s help to detect and contain Ebola; China needs the world’s help to do the same with its killer. Short of that assistance, the world is in big trouble.

We all know that the pandemic next time is out there getting ready; it’s probably going to be bigger than COVID-19 in both human and economic devastation, and it’s going to hit in a decade, maybe less.

Now that we know about it, what are we going to do about it? Especially since the vaccine being developed for COVID-19, although it will soon be available by the millions of doses, may not be effective in warding off the pandemic next time.

In a prescient Foreign Policy article from 2018 titled The Next Pandemic Will Be Arriving Shortly, Lisa Monaco and Vin Gupta reported: “Pandemic disease is arguably one of the greatest threats to global stability and security. But investments to contend with such outbreaks have declined to their lowest levels since the height of the Ebola response in 2014, with U.S. federal dollars cut by over 50 percent from those peak levels.”

Seems that those in charge of pandemic threats worldwide were warned as early as 2014 by The Journal of the Royal Society: Global rise in human infectious disease outbreaks.

Interestingly, the title of Cowen’s 2013 NYT article was: To Fight Pandemics, Reward Research.

Bingo! Pandemics are big problems that need big solutions, which means big money that only big government can provide. Artificial intelligence has been lavished with funding from all directions; not so service robotics. And, quite frankly, service robotics looks neglected.

Professional service robots
Just to be clear, professional service robots are defined by the International Federation of Robotics (IFR) as “a robot which operates semi- or fully-autonomously to perform services useful to the well-being of humans and equipment, excluding manufacturing operations.” The International Service Robot Association (ISRA) issued its definition of service robots: “Machines that sense, think, and act to benefit or extend human capabilities and to increase human productivity.”

Both are kind of murky explanations. Best way to know one is to see one in action, by the service it performs. On the front lines of the Great Virus War of 2020, they can be seen rolling into hospital rooms beaming UV light everywhere in order to kill bacteria and viruses; others scoot through hospitals spraying disinfectant on room and corridor floors. Mostly though, professional service robots carry things; they are autonomous transport vehicles. Some carry food, some medical supplies, some carry two-way audio or video or both (telepresence). Bottom line, they carry stuff.

On the frontlines of the Great War, they have served adequately, but marginally. Service robots are going to need to step way up if they are to be of maximum utility, serving as lifesaving allies to humans, in the pandemic next time. Carrying stuff isn’t enough.

Viruses are evolving to be better killers, service robots must evolve to meet the deadly challenge. So far, there’s not much evolution going on in service robotics.

This recent chart (see below from Texas A&M) graphically shows the uses that service robots have been called upon to perform during COVID-19. Mitigating exposure of frontline health workers to deadly risks is not well-represented. 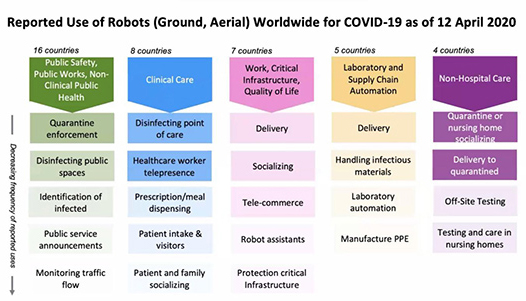 Form follows function
To be fair, modern service robots have not been around for very long; maybe a decade’s worth of small tech companies, startups, and brilliant individual efforts pushing the boundaries of service robotics forward. And no service robot builder is going to over-engineer a machine with capabilities the machine will never be called upon to perform.

Savioke’s Relay service robot, for instance, performs room-service deliveries in hotels; it doesn’t need an arm, so it doesn’t have one. Savioke was founded in 2012. Generally, many other service robot companies came into existence on and around the same time

Moxi is what’s called a “carebot” or AI-enabled go-fer WITH AN ARM! and is supposed to relieve the 30 percent of a nurse’s workload that is not involved with direct patient care. Okay, that’s much better. And the cobot arm stuck to Moxi’s shoulder can grab, lift, and manipulate things…almost anything. That’s a striking addition…and refreshing.

Then there’s FACO, which is probably the most unique service robot out there. “It’s mobile and autonomous, can sort the infected from the healthy, is totally impervious to the deadly disease, is AI-enabled and sensor rich enough to examine patients, take thermal temperatures, analyze chest x-rays and 3D CT-scans, tele-connect patients to physicians, and act as a remote, high-def diagnostic probe for medical staff?”

FACO’s multi-tasking and AI capabilities enable it to work directly with patient care, in many cases saving human care givers from undue risk.

With Moxi and FACO, it’s easy to see the rise of a new breed of service robots. If produced in great enough numbers, each could directly impact the risk factors for caregivers serving in the teeth of the virus pandemic.

On the frontlines of COVID-19 hundreds of doctors, nurses, and healthcare workers have died from the virus, thousands of others daily run the gauntlet of potential sickness. The need for service robots that can help their cause is desperate.

This kind of sentiment on the frontlines is common: “I’m risking my life and the life of my family,” said Joan Pons Laplana, a nurse who works for the National Health Service in the UK. “I’m going to work, because I love helping other people. But I want the government to equip me properly – it feels like they’re sending soldiers to fight with water pistols. It’s unbelievable.”

How soon for “collaborative” service robots?
Like everything else with the pandemic, the cry is how soon for help? Treatments, medical equipment, vaccines, cures, and yes, service robots that can really help with the dishes.

There’s seven to ten years before the pandemic next time; and we have the inklings of a direction for “collaborative” service robots in Moxi and FACO. In addition to billions of dollars in R&D, what next? Certainly, something way beyond what any small tech company or startup has heretofore attempted to build or even imagine. For starters, maybe the mindscape of what a service robot is or should be needs expansion.

Does service robotics need its own CERN: The massive, world-renowned European Organization for Nuclear Research, known as CERN (Switzerland)?  Maybe somewhere west of Pittsburgh there would be a massive, stadium-like, domed structure exclusively reserved for service robotics R&D.

Close by to CMU (Pittsburgh) and its National Robotics Engineering Center (NREC), and close enough to the Boston-Cambridge cluster of robotics expertise, a CERN for “collaborative” service robotics would house the world’s best talent and best machines, together with the free use of any and all intellectual property relating to service robotics.

It’s an idea not without precedent. Vannevar Bush put one together during WWII called the U.S. Office of Scientific Research and Development (OSRD), through which almost all wartime military R&D was carried out…incubating scads of post-war tech companies and nearly a dozen Nobel laureates in the process. 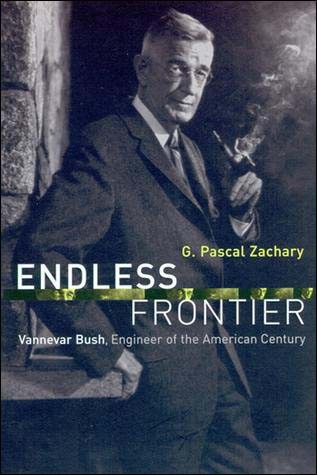 If the COVID-19 pandemic is truly a WWII-type event, as it has been called, maybe then we need to rethink what it took to win that war, and maybe mimic the OSRD.

WWII began with bi-planes and ended with jet aircraft; maybe we can do the same for service robots.

Beyond pandemics, there are uses for general patient care in hospitals and clinics, elderly assistance, service to the handicapped, or as the ISRA puts it: “Machines that sense, think, and act to benefit or extend human capabilities and to increase human productivity.”

Bush imagined achieving such objectives in his Science — The Endless Frontier. A Report to the President on a Program for Postwar Scientific Research (1945).

In seven to ten years, the world needs to stop the next pandemic before its deadly havoc is released. Service robots will need to be ready.