Disruptor in the Pharmacy

Disruptor in the pharmacy
These days, it seems like every service is deploying an automated counterpart that can carry out the intended task as efficiently, or better, than a human. The next time you visit a hospital or retail pharmacy, you might just see one in action. You’ll get some first-hand insight into why pharmacy robots are disrupting the traditional ways drugs are dispensed and its multi-billion-dollar pharmacy industry.

In fact, pharmacy automation is a young, quickly growing industry that’s rapidly trending upward. What was a global market of $5.1 billion in 2019 is now forecast to $7.8 billion by 2024, growing at a CAGR of 8.6 percent. That’s certainly a small number when compared to the worldwide pharmaceutical industry’s $1.5 trillion market; or even the annual take from U.S. pharmacies and drug stores which is estimated to be over $300 billion.

Pharmacist’s dilemma
Becoming a registered pharmacist is a rigorous career path. Pharmacy education is generally a five-year highly intense process that annually graduates thousands of dedicated professionals into a fast-paced mega-business, where, in the U.S. alone, over 3 billion prescriptions are prescribed and dispensed annually. Do the math, that’s over 8 million every 24 hours. Pharmacy Times reckons that the average pharmacy, on average, dispenses some 250 prescriptions per eight-hour shift—over thirty per hour! 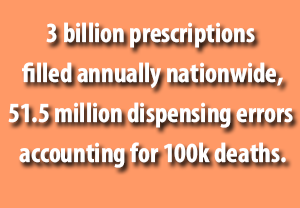 It’s a pharmacist’s job to ensure that each patient receives the right dosage of the right medication for their needs, and that they are clearly advised about the do’s and don’ts of their treatment. Overall, pharmacists do well at the all-important task of dispensing drugs quickly and error free. And patients, by and large, are more than satisfied with the pharmacy experience of interacting with a knowledgeable and skilled pharmacist.

However, as skilled and as dedicated as pharmacists are, they are human and prone to occasional medication dispensing errors. With many people relying on daily medication, some with cases so severe that they wouldn’t survive without their meds, the importance of accuracy and precision is obvious.

One mistake could cost someone their life –which happens all too frequently in the fast-paced industry. According to Pharmacy Times, dispensing mistakes are estimated to be 51.5 million errors out of 3 billion prescriptions filled annually nationwide. That tallies out to over 6 thousand mistakes per hour!

That’s where pharmacy robots come in.

Pharmacy robots: What and why?
Pharmacy robots, like the Max2 from Parata (U.S.), are capable of dispensing the very same medications that any human pharmacist can, but they do so with zero chance of human error.

By automating the labeling, filling, and capping of vials, the Parata Max 2 can automate up to 80 percent of a pharmacy’s medication dispensing needs, operating autonomously WITHOUT ERROR, which also goes to reducing a pharmacy’s operating costs (see video).

The typical robotic pharmacy system receives orders for prescriptions electronically, usually directly from the physician. Batches of pills are then separated into their appropriate dosages. Each dosage is bagged and labelled with the appropriate information, complete with a unique barcode for identification. Using barcode readers in a hospital pharmacy helps nurses to confirm that they have the right medication before administering the medication to a patient.

Many people don’t understand the need for pharmacy robots, but then again, many people don’t know just how many patients are impacted by human errors in prescribed medication.

In 2019, the CBS 11 I-Team learned that pharmacy errors generally take three forms: errors dispensing the wrong medication or dosage, printing incorrect labels, or failing to educate patients about their medications. Dr. Marv Shepard, the former Chairman of the Pharmacy Administration Division of the College of Pharmacy at the University of Texas in Austin, says dispensing errors cause nearly 100,000 deaths in the U.S. annually. He adds that errors typically occur because pharmacists are overworked. “They’re having trouble because of the pressures of the environment.” With many pharmacies open 24 hours as well as The Affordable Care Act enabling more people on the healthcare rolls, pharmacies can be an overwhelming job experience

Pharmacies obviously have problems that need an effective solution, and pharmacy robots seem to be leading candidates.

There are incredible benefits…
In a professional context, robots can seem like the better choice because they rid the worry of human fault. These robots don’t get tired, unfocused, or bored – three attributes that can commonly arise when a pharmacy is open 24/7. The computerized system through which robots work drastically reduces their chance for error, and many doctors across the United States are already used to working with these systems.

Bill Lockwood, the Executive Director of the American Society for Automation in Pharmacy, is an avid supporter of these robots.

“Automation is making pharmacies more efficient, no question about it,” says Lockwood.  “Increased efficiency is giving pharmacies the opportunity to offer more services and to provide more drug safety.”

On average, robots are less expensive than pharmacists. According to Mike Coughlin, the president of ScriptPro, robots cost about $12 per hour, while pharmacist salaries are a little over $18 per hour.

It’s also important to remember the sensitive nature of these medications, where purity is vital. Robots work in environments that are protected in ways that reduce contamination. Additionally, the chances of medication getting mixed is reduced when pharmacists aren’t handling the drugs themselves.

Speed, accuracy, and cost are three of the most important attributes to consider while dispensing medication – and robots seem to meet all three of them.

…But what about the human pharmacists?
The biggest fear that arises when any technology advances to the point that it could do the work of a human is the unemployment fallout that will occur if they are put into use. What happens to human pharmacists if robots are made to do their jobs better than they ever could?

There are multiple answers to this question, all of which shine a light on the potential advancement of the pharmaceutical industry.

While dispensing medication is a big part of any pharmacist’s job, that isn’t the only thing they do. Pharmacists are required to advise their patients about the use of medication, taking into consideration the other medications the patient might be taking, any health issues they might have, as well as lifestyle changes that they might have to make. This part of a pharmacist’s job is best done when it involves personal human interaction. The use of robots to take over the dispensing of medication allows pharmacists to use more of their time to build relationships with their patients and to cater to their individual needs.

From a management standpoint, the use of robots helps staff members realize the potential of their human employees. Even if fewer pharmacists are needed in the wake of robots, that doesn’t mean that they will be fired. Managers typically move these employees into other jobs that require more human judgement and thought, and they are often position that are more fulfilling and important for the worker.

Many doctors believe that the introduction of robots will help move the pharmaceutical industry into something more than it is today. The average patient sees their pharmacist more than they see their doctor. Pharmacies are striving to be more patient-centered, turning into places that patients can come to for advisement and information, rather than solely being the source of their medication.

The benefits listed above have already been seen in practice. In 2016, Tom Gierwatoski (registered pharmacist/owner) boosted his prescription volume by 50 percent when he installed a ScriptPro dispensing robot in his Platte Valley Pharmacy in Brighton, CO.

“We were able to reallocate staff to things that require more human attention,” he said. “With the robot, we are averaging 300 scripts per day and just one technician doing all the inputting. There are plenty of more rewarding and more profitable things we can do versus counting pills on a tray.”

The desired situation
While pharmacy robots seem to be an error-free system for dispensing medication, it is unlikely that human pharmacists will ever completely cease to exist. Experts don’t think that robots will ever be able to completely replace the expertise of a trained, educated pharmacist. Many pharmacy owners aim to combine the use of robots with employees in a way that maximizes both of their skill sets.

Currently, these robots come in a variety of forms with varying abilities and output sizes. Industry leaders:

Pharmacy owners are free to choose robots that complement their existing system in the best way, ensuring that full efficiency is achieved as much as possible. A retail-based pharmacy robot, which counts and dispenses pills, costs about $200,000—less than two years’ salary for a pharmacist.

A delicate balance between robots and human pharmacists must be struck, but the benefits of taking advantage of this technology seems to be pointing the industry in the right direction.