“Global welding market to $48B by 2026, growing at CAGR of 5.7%,
driven by 3.6% increase in manufacturing activities worldwide.
Asia-Pacific’s $10.74B leads. Emergence of automation to escalate sales.”
—Fortune Business Insights

Human exodus from welding
Nail guns, screw guns, glue guns; robots have been taught to use them all. Even lightweight soldering is robot-able. Until recently, except for large-scale assembly lines like auto plants, welding has eluded robotic fastening. Humans, with welding torch in hand, have been the primary producers in metal fabrication, especially joining pieces with complex geometries.

Robots first went to work as spot welders at Lordstown on General Motors assembly lines in 1969. Spot welding and die casting, caged off and isolated from humans in manufacturing has been the lot of most robots. The idea of robot welding cells in proximity to humans is relatively new, and robot tech has been ably trying to fit itself ever deeper into the joining process.

Although for humans welding jobs have been and still are very plentiful, fewer and fewer people are signing on for this potentially dangerous career. Jobs with sparking metal cinders that use tanks of explosive gases or high voltages, and utilize torches that burn at 5000 degrees Fahrenheit or more, are becoming ever less sought after or not sought after at all. Today, fabricators are facing a global shortage of 1.2 million welders, which has caused, in the U.S. alone, 40 percent of manufacturers to decline new contracts because not enough skilled welders were available. 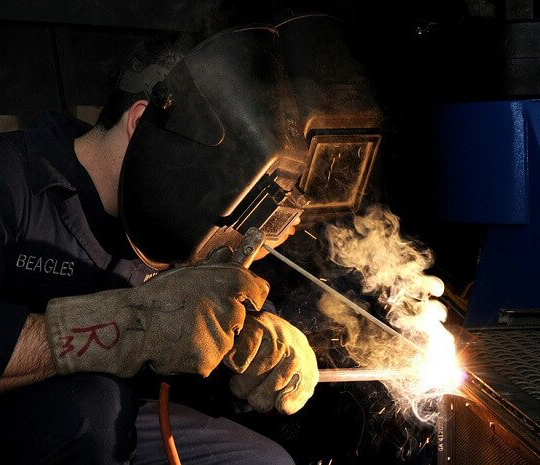 In China, with its half-million industrial robots, 35 percent are welding robots; and incredibly, estimates see the future need for at least two million more.

With worldwide manufacturing slated to increase by 3.6 percent, and welding to follow along, growing at 5.7 percent, the fastening work is there for the asking, but humans are now wary of the hazards to health and well-being. Ultraviolet light can burn eyes, gases explode, electrocution is a threat, the ergonomics are dreadful, the pay barely middling, and who wants to weld underwater and possibly drown? Then too, says Lincoln Electric’s Jason Lange, “On any given day, the numbers of people retiring exceeds the incoming replacements, creating a void.” Hence, from drudgery and hazards that force retirements at around 50-years-old, a million-plus welding careers go wanting. “Robotic welding helps fill that void,” Lange adds.

Then there’s new metallurgy and new processes that preclude human welders, as Erwin DiMalanta, director of welding & cutting at ABB Robotics, points out. Car manufacturers have switched to high-strength and ultra-high-strength steels, he says, “which have metallurgical properties making them stronger, lighter, and more corrosion resistant, yet with high formability and weldability. That’s drastically changing how metal structures are designed, formed and assembled.” Jobs for which robots are better suited than human operators.

Then too, “as much as 90 percent of the [car’s] body might be aluminum now. Owing to its higher conductivity, you need more electrical current to spot weld aluminum and current is synonymous with heat. Yet we’re going to thinner gage materials. In some vehicles, the materials are about 1-mm thick. So how do you deal with these trends that are going in opposite directions?”

For Masoud Harooni at Trumpf Inc., its laser welding, which is a totally robotic process. “Laser is probably the biggest thing to happen to welding in decades,” he says. And it’s much faster: “For example, if you’re making 50 parts a day with robotic arc welding, robotic laser welding could produce 300, 500 or even thousands of the same part in a day.”

“One robot system will make as many parts as three welders, adds Erik Miller at Miller Electric Mfg. Co. “You’re saving two salaries per shift and the average pre-engineered cell cost is $100,000 to $120,000. It pays for itself in about a year. Typically, if you can automate a process and get payback in less than year, that’s something you do right away.”

Metallurgy, process, and ROI are tilting the welding field toward robots. Danger is a distinct part of the job as well; research from the U.S. Centers for Disease Control and Prevention (CDC) shows underwater welders die at a rate that is 40 times higher than America’s national average, which is much worse than fishing, logging, and roofing. 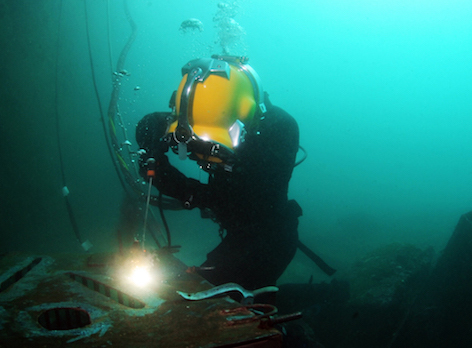 All of the major manufacturers (ABB, FANUC, KUKA, Yaskawa, and Kawasaki sell pre-engineered robotic cells with everything shipped to a customer site on a pallet. With the global welding market growing at over 5 percent and headed to $48 billion by 2026, all of the majors should experience a spike in sales.

Cobot welders
The newest robot on the block, the cobot, is also getting into the welding business, which is especially handy for SME’s with smaller budgets, a desire for a faster ROI, and maybe the need to move a welding cell around the shop.

Miller reckons that a large payload robot “with a strong arm carrying a large tool with two electrodes” may not be necessary. “Manufacturers can now use a safer 8kg robot, mount a process head to it, and automate resistance spot welding relatively easily.” With most major cobot manufacturers offering 10kg cobots, cobot welding cells (at a third of the price of the big boys) have begun to show considerable promise. See video: AUBO i10 (10kg) cobot laser welding.

And if we add AI, what then?
Nikkei Asian Review reported that Minyue Tech (China) has developed a 3D laser optical-angle sensor, which gives robots “eyes and brains.” “Vision sensors are placed on the robot and used in conjunction with artificial intelligence. That allows the robot’s motions to be tracked in real time using visual feedback.”

The exodus hurries near
Humans and welding are looking more and more like a time-limited relationship. With good reason: Humans are rejecting a dangerous work life while robots are embracing it; and welding tech is getting just too good not to give robots the decided edge on all future welding jobs. And, quite simply, the bottom line is the bottom line in any debate: Their ROI is fantastic, they vastly outwork humans, and they never make mistakes. In the grimy but necessary business of welding, robots look like the perfect match.