New Cobots to Consider for 2020

Challenging the status quo
Three more new cobots just hit the streets, which these days begs the question: Do we need another new cobot? After all, there are 150-plus peeping out at us in the Cobotics World online catalog.

Strangely, the answer is really yes and no. Yes, innovative new cobot tech is continually needed to propel cobotics to the next level. No one ever thought that Universal Robots’ original design would stand forever unchanged or unchallenged. And no, we do not need more cobots that ape the qualities already extant in the existing 150. Familiarity too often and too easily breeds similarity. Where’s the fun in that?

Two of the three newbies, the Jaka Zu and Flexiv’s Rizon fit the aforementioned yes category; the third, FANUC’s CRX, is a definite no from a tech standpoint, but a yes to FANUC’s desperate need to finally bring a legit, competitive cobot to market as well as to immerse Yamanashi-based FANUC in a new technological direction.

Finally, FANUC
Early on in the great, global cobot awakening, FANUC’s idea of marketing a cobot was to shrink down some of its existing industrial robots, cover them in green rubberized foam, and roll them out for sale. It was a definite non-convincer. A better effort was obvious if FANUC wanted to stay relevant in the new burgeoning collaborative robot space, especially with the company’s extensive and well-established customer base.

Kenkyo Investing suggests FANUC’s miscue was more related to the company’s fixation on reusing its own off-the-shelf parts: “In developing new products, FANUC uses proven and reliable existing technologies over new technology. The rationale behind this is part standardization. Using the same parts for different robots means there is no need to open up a new production line for new parts, thereby conserving resources.” 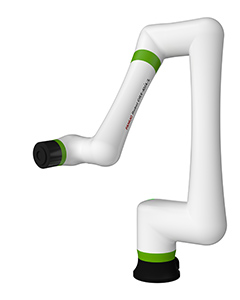 Also not lost on FANUC, or any other cobot developer, is the estimated massive addressable marketplace for cobots, which is expected to grow by the multi-billions of dollars in sales by the early 2020s. FANUC knew that it had to make some moves, and fast. ABI Research is forecasting cobot arms at $11 billion by 2030, up from $1.9 billion (2018).

In 2015, FANUC invested $7.3 million in Preferred Networks, a Japanese AI start-up; in 2017, it then rolled out its early-warning FIELD system (FANUC Intelligent Edge and Drive System) in pursuit of Zero Down Time (ZDT) for its deployed robots. FANUC has more than 20,000 robots connected to ZDT at more than 100 customer locations in 16 different countries; the potential for massively expanding that universe is compelling. In 2018, FANUC bought Field Robotics, the newbie Japanese maker of CORO the “elbow-less” cobot (price undisclosed). By late 2019, FANUC was ready, and rolled out its new line of seriously-transformed, real-cobot-looking CRXs.

Will the CRXs be enough to turn the tide for a solid presence in the cobot universe? Probably not, the competition is way too strong. The real upside is with its own very large, existing customer base that could most definitely utilize cobot capabilities, and tie them into their existing FANUC Intelligent Edge and Drive System. Zero Down Time (ZDT) could come in quite handy in a smart factory loaded with cobot work cells.

Jaka makes a move
Shanghai-based Jaka, established in 2014, has a close history with Jiaotong University’s Robot Research Institute (Shanghai), and offers a line of four Jaka Zu cobots (3kg, 7kg, 12kg and 18kg). In 2016, Jaka received an investment of $1.5 million from Hejun Capital, and then another $8.5 million in 2018.

Operating in the food, chemical fiber and machining, Jaka’s founder and chairman, Li Mingyang, is looking to expand into the 3Cs (computers, communications and consumer electronics), which is not a bad idea since China produces over 70 percent of the world’s 3Cs.

Jaka claims that its “biggest edge over other collaborative robots on the market is that it supports wireless connection and remote motion planning, which saves the cost of demonstrators and removes geographic restrictions.”

China’s KrAsia expanded on the “Jaka edge” reporting: “Most robots are taught movements through demonstrators, which are connected with the robots with wires, or by directly having their arms pulled and dragged around by users, but Jaka’s robots can be wirelessly connected to smart devices, which allows users to instruct the robots to perform the desired tasks simply by working out the motions on Jaka’s app.”

Li says that Jaka’s main source of revenue is from intelligent system integration (revenue projected at $31.5 million) with approximately $12.5 million of that projected revenue generated from sales of cobots. For comparison, it took Universal Robots nine years (2005-2014) to hit $38 million (in a much smaller cobot marketplace); Jaka will do less than one-third of that number in five years. Such slow but steady growth Jaka wants to plump out big time. Still, Jaka Zu, in a field of 150 cobots, is doing quite well.

Of course, no cobot maker other than Universal Robots is crushing sales. The International Federation of Robotics (IFR) put global cobot sales at 14,000 for 2018 (11,000 in 2017); a less-than-meagre 3.2 percent share of the more than 422,000 industrial robots installed worldwide in 2018. Interact Analysis put 2018 cobot revenue at $600 million. Jürgen von Hollen, CEO of cobot leader, Universal Robots, sees a vast addressable market of cobot unknowing worldwide: “Probably only 10 percent of our target market knows about collaborative robots [cobots].”

In Jaka Zu’s home turf of China, where there are in excess of 1.5 million factories (a staggering number!) and where 97 percent are estimated to be SMEs in dire need of a productivity bump, cobot automation is not an if but a when. Although Jaka Zu’s cobot arm is unremarkably similar to many others, its wireless tech is more than special; it’s the future of all robotics. Breathe a bit of intelligence into that mix together with FANUC’s Zero Down Time (ZDT), and Jaka Zu becomes a big winner, if, to echo von Hollen, the vast addressable market out there knows that Jaka even exists.

Here’s a video (below) that displays Jaka’s tech in action (sorry, only in Mandarin, but it’s the visuals that are important).

Enter the “adaptive” cobot: Rizon
In an age that’s beginning to see cobot arms getting commoditized, with the seat of intelligence, sensors, and operations tech in the gripper, the Rizon “adaptive” 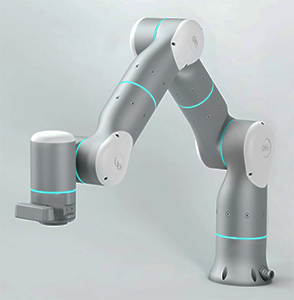 cobot is a cut in a different direction. As Pratik Gundawar titles his CyberNews article: Adaptive Robots: A New Era Has Begun.

Rizon is the brainchild of newbie Flexiv Robotics (2017), a Santa Clara-based corporation with tech ties to Stanford’s AI laboratories. Although a California registered entity (C4046382), much of Flexiv’s world is China centric: Offices in Beijing, Shanghai, and Shenzhen, R&D in Shanghai’s Minhang District, and factory production in Foshan. Flexiv is well-endowed with $22 million in backing from GSR Ventures, Gaorong Capital, ZhenFund, M-Fund, and Shunwei Capital.

Bin Yue, one of Gaorong’s founding partners commented recently in the press: “It’s quite unusual to see a startup develop a robotic arm from scratch that has a precise force control system integrated with top-notch AI technologies.”

BTW: Interesting how Bin Yue’s remarks zero in on the onrushing skill set necessary for every future cobot team. Seems Flexiv has the right mix that others must follow.

Certainly not a press release targeting end-user SMEs, but rather directed at a higher-level audience, which is probably necessary to introduce the machine’s new “adaptive” technology.

See related: Do Cobots Have an Image Problem?

As Gundawar explains it, “Rizon utilizes AI-based computer vision with a depth camera to sense and recognize objects, even in complex environments. It then uses this information to generate its own motion and task plans. An integrated AI learning system enables Rizon to not just learn individual tasks but actually combine them to perform more complex ones. As a result, this drastically shortens setup and programming time.”

Brilliant is Flexiv’s own white paper on its technology: Adaptive Robots and The Future of Industrial Automation; CEO Shiquan Wang and gang are masterful in their portrayal of the current status of cobot tech: “While addressing the limitations of traditional industrial robots, they come with their own set of issues in the face of current and future automation needs.

“To achieve safety, cobots typically have to sacrifice payload, velocity and force limits that are crucial for productivity; they cannot be easily deployed by nonprofessionals and still rely on integrators with more advanced skills; Cobots also need to collaborate with humans to accomplish complex tasks.”

Flexiv’s insight on the different levels of intelligence necessary to accomplish any job is fascinating. Being able to recognize that need and then to incorporate it into their machine is a remarkable accomplishment.

What’s next they say are cobots that are more flexible, intelligent and adaptive. Ergo, Rizon.

When queried about the selling price of all this tech brimming from Rizon, a company spokesperson was succinctly evasive, replying: “Flexiv is a solution provider, and the price of solution is value-based and competitive in terms of ROI.”

It’s evident that a new generation of cobots is on the rise. It will be interesting to see how it all plays out. Will cobot arms be mostly simple devices commoditized to the max with the gripper as the brainiac or is there more than enough market for a sophisticated arm to play a big role?

Cobot To-Do List: Cheaper to Buy, Easier to Use; The $6,500 cobot and cobots “mimicking humans” have arrived

Keep Up with Gripper Tech:
The Gripper Chronicles

The Rise of the Smart Gripper
What next for the all-important, business end
of every robot…the gripper?