"The Gripper Chronicles" Turns One

All-Out Collaboration: Any Cobot, Any Tool, Any Job

As The Gripper Chronicles turns one, we chat with OnRobot’s Enrico Krog Iversen about being the “everything” gripper/EOAT supplier for every cobot brand. Is it possible…and is it necessary?

“If Iversen were his own stock, you might want to invest heavily in this savvy Dane
with his knack for success and winning track record.”

Fresh ideas in cobotics
One year ago, we launched our new column, The Gripper Chronicles, with the editorial task of paying close attention to what looked like the rapid evolution of cobot grippers, known also as end-of-arm tools or EOATs.

The advent of the collaborative robot or cobot, about ten years ago, and the ever-evolving, expanding list 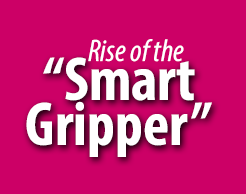 of chores that it has been called upon to perform, has had a dramatic effect on gripper/EOAT technology.

The last decade has seen cobot grippers evolve from simple, twin-jawed grabbing devices to today’s space-age-looking cowlings loaded with sensors and capable of performing multiple functions. And that functionality is growing and advancing seemingly on a daily basis. Blink, and something new is in the news, or working next to you.

Nearly all of that gripper innovation has been aimed squarely at the cobot, rather than its larger, more powerful cousin, the industrial robot. In fact, visit most any robot tradeshow these days and the truly hot products on display pulling the largest crowds are the cobots and their amazing workmates in gripper tech.

So, just what is happening in gripper tech these days that’s creating so much attention for the working end of a cobot…and why?

Is the cobot arm headed toward commoditization, with the gripper gaining dominance in cobot applications?

It was questions like those that prompted the birth of The Gripper Chronicles.

The savvy Dane
For a unique perspective on this new-age cobot/gripper partnership, we caught up with a man who has been an influential industry force for both cobots and grippers: Enrico Krog Iversen, CEO of OnRobot, a newbie end-of-arm tool manufacturer from Odense, Denmark, the same hometown as the world’s best-selling cobot line, Universal Robots.

In fact, from 2008 to 2015, Iversen was both CEO of and a major shareholder in the then-fledgling cobot maker Universal Robots (UR), which was acquired in 2015 by U.S.-based Teradyne for $285 million. UR had become profitable in 2010, and had posted revenue of $38 million the year before it was acquired (2014). UR today is responsible for nearly 50 percent of all cobot sales worldwide, and pulls in revenues well north of $170 million annually.

Cashing in his UR shares, Iversen, in 2016, next bought into another newbie, this time a gripper developer, On Robot (notice the two-word spelling). Quickly thereafter, he acquired four other gripper makers by 2019, renamed the outfit OnRobot (one word; no space between the “On” and “Robot”), and is now trying to power the new company into stardom that he hopes one day soon will rival or exceed his success with UR.

He’s looking to make OnRobot the go-to supplier for grippers and all other end-of-arm toolings. “There are companies supplying grippers, and others supplying sensors, and they are very good at that,” he told Evertiq in an interview, “but they are all focusing on one technology. But they will not cover an entire application.” According to him there’s not another one-stop, single-shop supplier in the industry, yet. He’s grooming OnRobot to take on that role.

If Iversen were his own stock, you might want to invest heavily in this savvy Dane with his knack for success and winning track record.

See related story in The Gripper Chronicles: The Rise of OnRobot in an Age of Grippers

Having straddled both the cobot and gripper worlds, he’s a great sounding board for a look-see into the future of both technologies. As a self-made millionaire, owing to his UR triumph, he’s certainly business bright; but humble and soft-spoken, drawing out his words carefully as he rolls out a forward-looking plan for OnRobot’s near-term tech and business trajectories.

“We are currently working on 28 new products,” he announced matter-of-factly, “that we will release sort of as a program maybe starting in December, but definitely starting in January next year.”

He was careful to go lightly on the specifics of the 28. Rather, he couched it in a story: “If you walk through a factory today and you see an employee in production using some kind of tool, it is very likely that we will take that tool and put it on our next generation platform and put it on a robot.”

The point of his story was that OnRobot’s platform will be much more than just a tool changer.  He was thinking more about the applications that the tool was performing together with the worker. The overall aim is for OnRobot to take any tool meant for any job, no matter what cobot brand is in use, and enable the tool to be used via OnRobot’s tech gear and programming.

Such a product is OnRobot’s Quick Changer (announced in September 2019) that offers customers the ability to easily switch between tools and cobot brands.

The previous April, OnRobot introduced a Digital I/O Converter Kit, allowing for the company’s grippers to seamlessly work with other cobot brands: Universal Robots, KUKA, FANUC, Doosan, TechMan, Yaskawa, Mitsubishi, Kawasaki, and Nachi. Those are the big brands for now; he’s looking to add many others very soon. 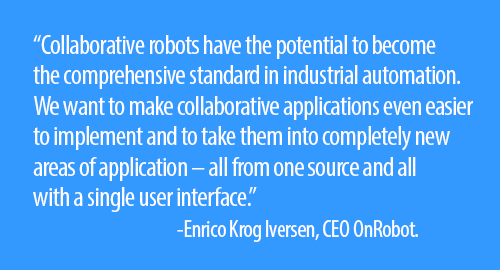 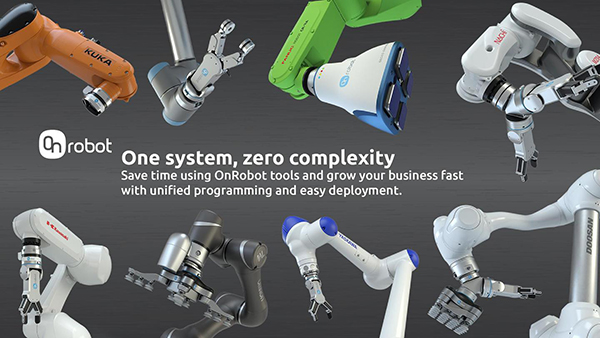 “It’s how a customer can truly optimize an investment in cobots,” he reasoned. For example, any factory working with a mix of cobot brands could turn to OnRobot to provide grippers and EAOTs for any of those brands.

He’s intending OnRobot to be the one-stop shop for any tool, gripper, or any sensor for any cobot brand, and for it all to be fully compatible. Everything snapping neatly together the way the famous plastic bricks do from his Danish next-door neighbor in Odense—Lego.

The company’s tech backbone, R&D, and manufacturing are now in place, he says; so too is a global sales, service, and marketing network. OnRobot has come far in under a year.

Next-steps for gripper tech
When asked about the inroads of artificial intelligence (AI) into the OnRobot plan, he was a bit circumspect, responding that he hadn’t spoken to anyone who had even a good definition of what artificial intelligence is. “That being said, do I think that the software would play an even more important role in the future? Absolutely, I do. Probably on the machine learning side of things.”

Iversen is all for any “software, and probably also some hardware, that will allow much easier programming of the applications or maybe even automatic application programming in the future,” be that ease of use via machine learning or something else.

And as to the manner of control for the cobot applications, did he see voice commands or smartphone control on the horizon for OnRobot?

Dmitry Grishin from Grishin Robotics sees smartphone tech as a leading edge into robotics, saying that the miniature OS and sensor components from phones are tumbling into robotics as fast as they can be developed.

“Our next generation products that we have released in September,” said Iversen, “you can already control from your iPhone or any other device, tablet or otherwise. It’s up to you.” 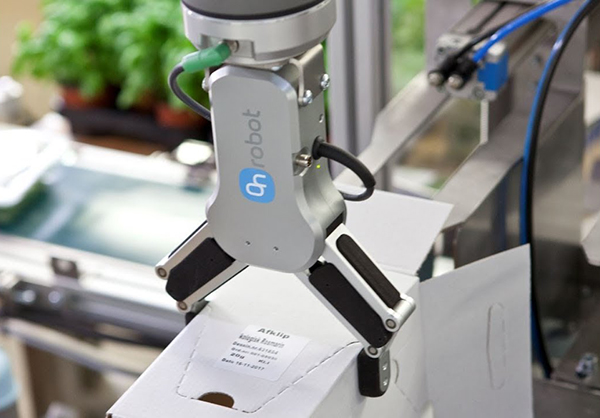 “You can also do the actual application that way. But there are also a lot of robots that are not ready for that quite yet. Will it come? I think it will. And will it be voice control? Will it be controlling it for whatever device you have close to you? Will it be a pair of glasses, whatever? We will have that solid communication device in the future.”

Similar to Grishin, Iversen sees advances in cobotics coming from outside of the robotics industry. “But once whatever that product is has hit the market, it’s important that we address it and make it instantly capable of working for us, say, for programming or whatever.

“So, I think we will see a lot of development, but again, I don’t see any big revolutions in 2020, and maybe not even big revolutions on the programming side in 2021. I think it will take longer. Even though it’s [cobotics] a fast-moving technology, it’s also to some extent a conservative industry.”

If and when interesting technology that’s advantageous to OnRobot appears, Iversen is not averse to acquiring it. “I think there’s a good chance that we will carry out a couple of acquisitions next year,” he replied when asked. “We are definitely in this game to build a large company and to be a significant player.” And if his four acquisitions from 2016 to 2019 bear out how deftly he puts the acquired pieces together, he probably already knows what kinds of target technologies best fit OnRobot’s needs to “build large” and “to be significant.”

When Iversen mentioned that he’d eventually like to bring OnRobot’s tech to the world of traditional industrial robots, it opened up even more exciting potential for The Gripper Chronicles.

Clearly, lots of the new tech emerging from cobotics could find ready application in much if not all of industrial robotics.

So, at the one-year mark in the column’s existence, ever-newer avenues are opening for investigation and reporting. And it’s speaking with people like Enrico Krog Iversen who can easily upgrade the excitement level a few notches.

Keeping an eye on the travels of OnRobot also makes for an interesting storyline. Here’s a newbie tech company cobbled together from four other companies that’s very well-funded and led by the guy who made Universal Robots into an industry-wide phenomenon. What’s not to like and be excited about in that?

The cobotics industry is large enough that there’s plenty of room for other OnRobot-type aspirants to pop up on the horizon.

We’ll keep an eye out for them.