No need to export
Squint your eyes hard enough at a map of China and it looks like a huge inland ocean.  Sprouting up through the blurred surface like ports of call are five mega-regions, which could, in theory, make for better trading partners than any other places in the world. No tariff-laden trade wars lurk in these friendly ports. Rather, there are industries and millions of consumers there that by 2030 are forecast to nearly double in size and prosperity. 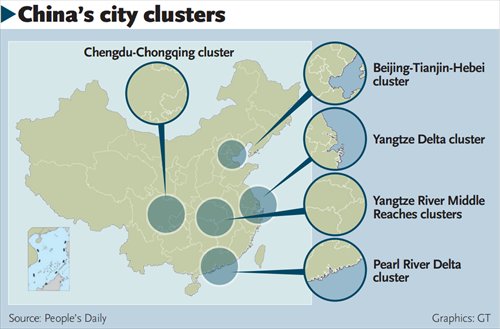 These are five mega-regions where the imperative to automate manufacturing and logistics as fast as possible is a veritable ten-year dash to 2030; by which time 220 million new, incoming city dwellers will plump out the five-region population to over one billion (over 800 million as of 2019).

220 million newbies who’ll arrive with needs like places to live, refrigerators full of healthy foods, microwaves, jobs, schools for their kids, and all the myriad other goods and services people need to live and prosper.

Morgan and Stanley (MS) researchers have tabbed the process Urbanization 2.0, and sent out some thirty analysists to get a sense of what’s going to happen here over the next ten years.

Journalists at The Economist took a look as well at the same mega-regions, exclaiming: “China’s urbanization is a marvel. The population of its cities has quintupled over the past 40 years, reaching 813m. By 2030 roughly one in five of the world’s city-dwellers will be Chinese.”

In October of 2020, when Xi Jinping heads up the country’s Fifth Plenum to get the ball rolling on China’s Fourteenth Five-Year Plan 2021-2025 (due out by March 2021), these five mega-regions will figure prominently.

Half of the 220 million immigrants will settle directly in one of the five mega-regions where each region of 120 million will each be nearly as populous as the current population of Japan (126 million).

Within those mega-regions, mega-cities (i.e. cities with populations larger than New York City’s 8 million), will zoom from a present day of 9 to 23 by 2030.

MS projects that next-gen technologies in these mega-cities, enabled by an estimated $800 billion in capex for digital infrastructure, should sustain “total factor productivity growth at 1.6 percent annually through 2030. Offsetting industrial automation, vocational training should help match skilled workers with high value-added manufacturing and service jobs.” Labor productivity will almost double, MS estimates, with 55 percent of the increase coming from the “agglomeration effects” of supercities and 40 percent from rural-urban migration.

China’s inland ocean has got the makings of being a very happy place.

MS is describing five very special pieces of real estate harboring a middle class of unprecedented proportions. MS researchers go on to say that these five will “account for 75 percent of China’s real GDP growth (65 percent in 2014-18).” China’s GDP for 2018 was $14 trillion.

“Bigger cities are associated with higher productivity and faster economic growth,” writes The Economist. “As a result, the government has sought to foster the rise of mammoth urban clusters, anchored around giant hubs and containing dozens of smaller—but by no means small—nearby cities.”

Three of these mega-regions are already well on track: the Pearl River Delta, next to Hong Kong; the Yangtze River Delta, which surrounds Shanghai; and Jingjinji, centered around Beijing. 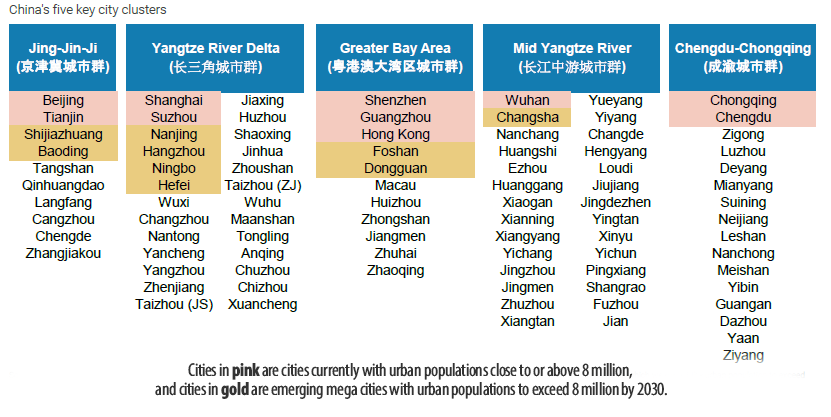 A key finding by Morgan Stanley analysts for the five mega-regions was the need for a “smart” logistics system.

“For instance, big data analytics could help predict customer demand and automatically arrange for product to be shipped in advance to the warehouses/ stores that are closest to customers, and automated sorting lines and industrial robots could make warehouse sorting and packing more efficient.

“With the development of technology, the adoption of unmanned drones/trucks would not only reduce efficiency losses by delivering goods around the clock, but also provide low-cost delivery options to easily reach low-density suburban areas.”

One MS transportation analyst believes average delivery times could be shortened to 24 hours nationwide by 2030 (vs. 2-4 days today) and 12 hours within each city cluster (vs. 24 hours in the Yangtze River Delta today).

Meanwhile, logistics costs as a percentage of GDP could come down to 10 percent by 2030 from 15 percent today, and express volumes could reach 300 billion deliveries per year as compared to 50 billion today.

How to achieve lower costs

According to PwC, logistics costs could drop by 47 percent between 2018 and 2030 worldwide. 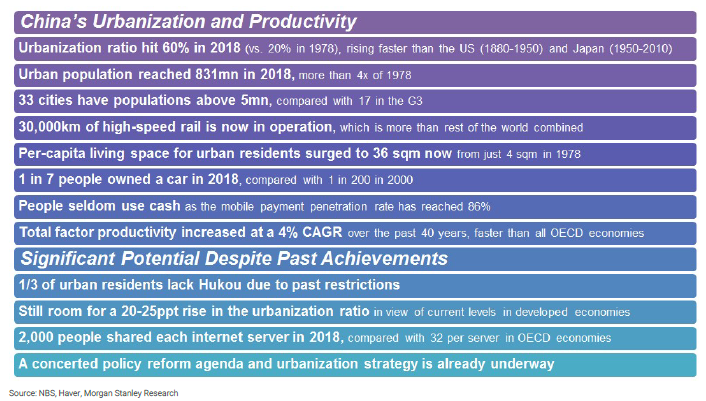