The $5 trillion robotics dividend: The implications of the emerging challenges are immense, especially in Asia

Era of robotization arrives…for real!
“[post-COVID] Business as usual should become something better, more efficient and productive. The current crisis has been the catalyst for a change that has been on the doorstep of industry for a while now—a world in which AI can provide intelligent solutions for some of our most essential needs: food, energy, housing, and manufacturing.”

The result will transform the capabilities of robots and their ability to take over tasks once carried out by humans. The number of robots in use worldwide multiplied three-fold over the past two decades, to 2.25 million. Trends suggest the global stock of robots will multiply even faster in the next 20 years, reaching as many as 20 million by 2030, with 14 million in China alone.

The implications are immense, and the emerging challenges for governments and policymakers are equally daunting in their scale.

The rise of the robots will boost productivity and economic growth. It will lead, too, to the creation of new jobs in yet-to-exist industries, in a process of ‘creative destruction.’ But existing business models across many sectors will be seriously disrupted. And tens of millions of existing jobs will be lost, with human workers displaced by robots at an increasing rate as robots become steadily more sophisticated.

Our study shows that the current wave of robotization tends to boost productivity and economic growth, generating new employment opportunities at a rate comparable to the pace of job destruction.

We estimate that a 1 percent increase in the stock of robots per worker in the manufacturing sector leads to 0.1 percent boost to output per worker across the wider workforce Using Oxford Economics’ Global Economic Model (GEM), we calculated how changes in the rate of installation of industrial robots could affect the global economy.

Overall, we found that a faster adoption of robots has a positive impact on both short- and medium-term growth.

For example, boosting robot installations to 30 percent above the baseline forecast by 2030 would lead to an estimated 5.3 percent boost in global GDP that year. This equates to adding an extra $4.9 trillion per year to the global economy by 2030 (in today’s prices) equivalent to an economy greater than the projected size of Germany’s.

Over the past decade, the global stock of industrial robots has risen dramatically, and is projected to grow even faster in the next 10 years, led by China’s record pace of installation. The robotics industry has experienced exponential investment growth, upending decades-long trends of gradual and steady expansion.

A convergence of innovations in digital technologies (e.g., artificial intelligence and machine learning) along with advances in robotics engineering and energy storage, is dramatically transforming the capabilities of robots.

New breeds of “cobots”—small, highly mobile, and dexterous machines that can readily collaborate with humans—are entering the manufacturing and logistics arenas, and can be easily “trained” to work with humans to optimize productivity. 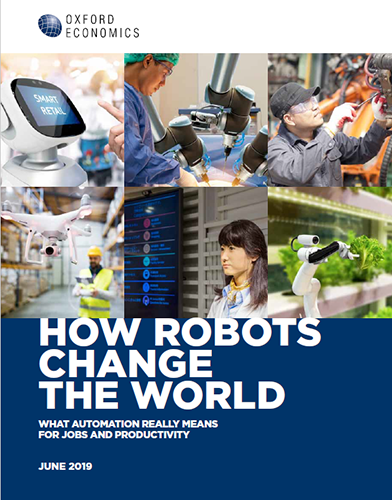 “Fund managers and analysts,” reports Reuters, “say that corporate spending on automation is contributing to positive earnings surprises. Nearly 83 percent of companies in the S&P 500 that have released third-quarter earnings so far have reported earnings above expectations, compared with an average 65 percent beat rate since 1994, according from Refinitiv.

“You’re seeing companies benefit in ways that aren’t easy to see when you look at the balance sheet, and all those investments start to add up and help protect margins,” said Matt Watson, a portfolio manager at James Investment Research.

“You don’t need to get into the nitty gritty when it’s back-of-the-napkin obvious that these companies are saving money” through increased productivity, Watson said.

So, what does Oxford Economics see as the drivers? Three main drivers are behind this new pace of adoption: price, innovative applications, and consumer demand.

Trend #1: Robots are becoming cheaper than humans
The rapid expansion in robot installations is driven in part by the plummeting real costs of the machines.

According to ARK’s research, industrial robot costs will drop by 50-60%, to levels much lower than most analysts now anticipate, by 2025. Combined with advances in machine learning and computer vision, this drop in costs should cause an inflection point in the demand for robots as they infiltrate new industries with more provocative use cases. These factors are behind ARK’s forecast for 3.4 million robot unit sales in 2025, up from roughly 380,000 in 2017.

ARK anticipates that industrial robots will cost less than $11,000 per unit, much less than the Boston Consulting Group’s (BCG’s) expectation of roughly $24,000, by 2025 (as shown in chart). 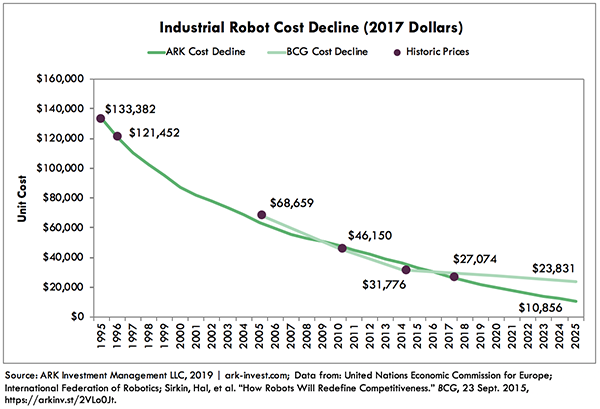 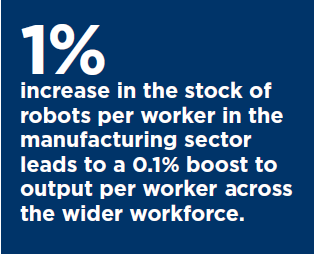 As with other advanced technologies, exponential growth in the processing power of microchips, extended battery lives, and the benefits of ever-larger, smarter networks have all dramatically increased the per-unit value of many technological components, while the average unit price of a robot continues to fall.

Rising labor costs in major manufacturing economies also contribute to increasingly attractive pricing dynamics. In China, for example, unit labor costs in manufacturing have increased by more than 65 percent since 2008. Wage rates have also been rising consistently in Korea, Japan, the US, and Germany, in part due to the ageing of the population in these countries.

Trend #2: Robots are rapidly becoming more capable
As robot technologies improve, they are being used in evermore sophisticated processes, in more varied contexts, and can be installed more rapidly.

Innovations have made today’s robots smaller, more sensitive to their environments, and more collaborative.

Thanks to AI, they can learn from their experiences and make decisions informed by data from a network of other robots.

These developments have helped propel robot adoption in sectors beyond the automotive industry. 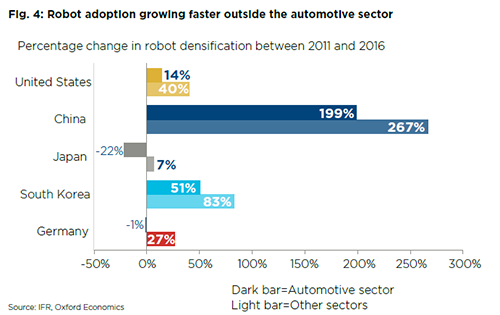 China is at the heart of this change: it has become the world’s largest automotive manufacturing site, and a major producer of consumer electronic devices, batteries, and semi-conductors—all highly robot-intensive manufacturing sectors.

This trend is set to continue, as China is still only at the beginning of its automation journey. Despite its rapidly growing inventory, China only uses 68 robots per 10,000 workers in general manufacturing, compared with 303 per 10,000 in Japan, and 631 per 10,000 in South Korea.

Large sections of China’s workforce are still engaged in manual processes, meaning vast potential remains for further robotization of its manufacturing sector—more so than in any other country.

With government policies aimed at expanding the use of electric vehicles (which will require large scale battery production), and the establishment of high-tech manufacturing, we expect China will likely continue its acceleration in robot investments for the next decade.

By 2030, if the investment in industrial robots continues to grow at its current trajectory, China will have close to eight million industrial robots in use, as its robot density approaches levels comparable with the average across the European Union.