Will AI vet the list? Will it be biased? Will the lazy dude in Finance make the cut?

Reskilling is too expensive to waste on just anyone
“Drawing from average reskilling costs…the 1.37 million workers who are projected to be displaced fully out of their roles
in the next decade according to the US Bureau of Labor Statistics, may be reskilled to new viable (similar skillset)
and desirable (higher wages) growing roles at a cost of $34 billion. On average this would entail $24,800 per displaced worker.”
—Towards a Reskilling Revolution, World Economic Forum

The fritter factor
Unless you are on a production line deboning chickens, research says that you fritter away three hours of each workday on activities totally unrelated to your job, not including lunch or coffee breaks (see chart). In the U.S., such lax work habits cost employers over $700 billion annually. More than the annual GDP of Switzerland.

Seems that goofing off for three hours daily can really add up!

That doesn’t even count time consumed by the black hole of useless meetings, which, when everything is lumped together, all tally up to more than 50 percent of every eight-hour workday. 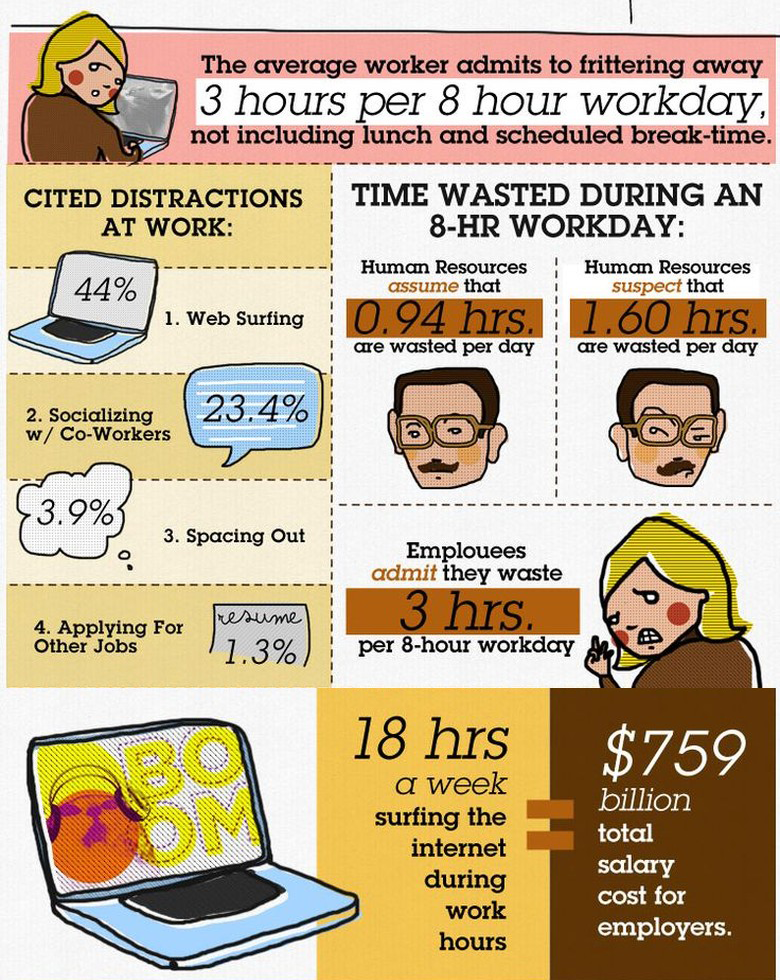 Can anyone really blame any employer for trying to get a handle on increasing productivity by corralling some of those lost workplace hours? Combine the lax factor with payroll savings via reduced head counts and the lure of quick ROI on the costs of automation, and justifying permanent layoffs seems like a no-brainer.

It makes it so much easier for employers to opt for automation and to hand out pink slips when grumbling about a purposefully inefficient business environment.

So, when the great “reskilling” movement begins for those most likely to be displaced by robots or robotic process automation (RPA), sluggish work habits will need to be reskilled “out” of the masses of people transiting into future workplaces.

Only human
Okay, humans are social beings and not automatons. Check. They’re given to building relationships with one another while at work, which is great for teamwork and camaraderie. Check. But 18 hours a week surfing the Internet while on the job seems like a bit much (see chart). Or, worse maybe, checking cellphones every 12 minutes, according to an Asurion study.

If increased productivity for all—both human and machine—is to be a major goal for any reskilled workforce, then the reskilling process will need to confront lax workplace habits.

So, what’s up with the fritter factor? Why do employees consciously waste time at work?

Well, a Salary.com survey cites these as the top six reasons:

Other than going online, what other workplace sink holes are there where time is wasted?

“The biggest waste of time, according to 47 percent of our respondents, is having to attend too many meetings. That’s followed by dealing with office politics (43 percent); fixing other peoples’ mistakes (37 percent); coping with annoying co-workers (36 percent); busy work (22 percent); and returning an abundance of work emails (20 percent). Dealing with bosses came in last at a mere 14 percent.”

With reports like The Future Is Now: Workforce Opportunities And The Coming TIDE (Technology-Induced Displacement of Employees) forecasting millions of future job losses and displacements, good jobs will be at a premium, and employers will be leery of reskilling anyone other than the very best of their employees.

Employees who exhibit lax workplace habits might be left out. However, since most employees fall into the ranks of three-hour idlers, the fritter factor will undoubtedly become a significant issue during reskilling. Expensive reskilling at $24k a pop.

The bias factor
If there is bias on the part of employers when hiring new employees, will there be bias against the fritter crowd when it comes time to select who among a company’s employees get reskilled? Probably; maybe more so.

In a recent Wall Street Journal article, Why Companies Are Failing at Reskilling, companies are having a difficult time at the reskilling game.  “Employers are still trying to master the challenge of mapping the skills of their current workers, identifying the skills required of their future workforce and filling the gaps between the two.”

See related:
The Future Knocks Once. Let’s Be Ready This Time
Will COVID expose other vulnerabilities like the lack of U.S. “reskilling and worker training” capabilities?

Time is running out for many; and when time gets short, employers may opt for a sure bet. It would be more than easy to scan employee records for problematic employees not to reskill. Why bother to save anyone on file with obvious fritter infractions, or even just tendencies to fritter? Especially after the employee turns 25.

Why 25? “A White House report last year showed that nearly all spending, public and private, on education and training occurs before a person turns 25—essentially while they’re in formal school.

“The U.S. ranked second-to-last among 29 developed nations in terms of taxpayer-funded training investment, according to the Organization for Economic Cooperation and Development [OECD], and has shown little appetite for experimentation.”

It could well be that if you’re at work doing 18 hours a week surfing the Internet, and are observed (or mistakenly observed) in an obvious, non-work surfing mode, a reskilling opportunity may be very remote.