Do Cobots Have an Image Problem?

Is automation’s newest robot wonder machine experiencing market pushback. If so, what and why?

Did cobots misfire?
The International Federation of Robotics (IFR) was thrilled to announce that the number of cobot units sold in 2018 hit nearly 14,000 (11,000 in 2017).
Most news reports gushed over the numbers, with one excited source effusing: “staggering jump in the number of collaborative robot installations last year.”
Then again, that was only a 3.2 percent share of the more than 422,000 industrial robots installed in 2018. Interact Analysis put 2018 cobot revenue at $600 million.

Less thrilled, maybe even embarrassed, may have been the scads of forecasters who projected sales of cobots at thousands more units than the reality of IFR’s report.

When numbers don’t add up
To be sure, HMC Investment Securities was certainly not the only research group misfiring on projected sales vs. actual. Virtually every cobot prognosticator came up way short.

And forecasters weren’t the only ones perplexed by the sales numbers. More than a few industry insiders thought cobots would have sold more, and some may have even agreed with one high-placed robot exec who privately called it “a paltry showing.”

Unquestionably, the cobot arm is an extraordinary automation tool that has easily demonstrated its powerful versatility in a wide variety of manufacturing and logistics uses for large, medium and small end users.

So, what’s up, if anything, with the market pushback on cobots, commonly hailed as the most revolutionary advance in robot technology and design since the Unimate (1961)?

Well, to begin with, from “paltry” to “staggering” displays quite a range of industry opinion. Something’s a bit sketchy here, but exactly what?

Customers can’t buy a cobot if they don’t know it exists
Some cobot pushback in sales is simply put down to potential end users having little to no knowledge about cobots. 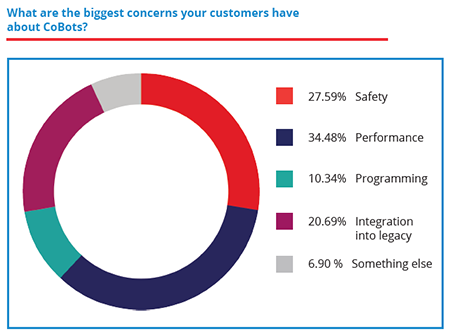 That’s coming from a CEO whose company is the world leader in cobot sales…by a very wide margin (59 percent of global cobot shipments in 2018, so says ABI Research). For an industry that’s been around since 2008, less than 10 percent, is very low market penetration. What about the other cobot vendors?

See all of the cobot competitor product lines here at Cobotics World.

Marketing to potential end users from the major cobot vendors has been, at best, irregular and scattered. The non-majors’ efforts to outreach to customers is just about non-existent. The lone exception being Universal Robots (UR). UR carpet bombs the globe on a regular basis with its advantages, plus offers online tutorials, a cobot academy, and a host of other online and in-person outreach. Self-admittedly, even UR confesses to falling short on outreach: “Probably only 10 percent of our target market knows about collaborative robots [cobots],”

“In part, this is down to focus. While collaborative robots are valuable, they generally suit deployments and use-cases with smaller shipments and a wider variety of small and large end-users.”

In short, it appears that onsie-twosie sales are far less attractive and sought after than truckloads of industrial robots bound for, say, Toyota or GM.

Let the distributors & integrators do the selling
Some cobot developers leave the customer introductions, contact, demos, and sales to distributors and integrators, but there seems to be pushback there as well.

A recent 36-page survey Global Robotics Report conducted by TM Robotics, revealed that over 55 percent of distributors “do not believe that collaborative robot technology is advanced enough to deliver the performance required by manufacturers today.” 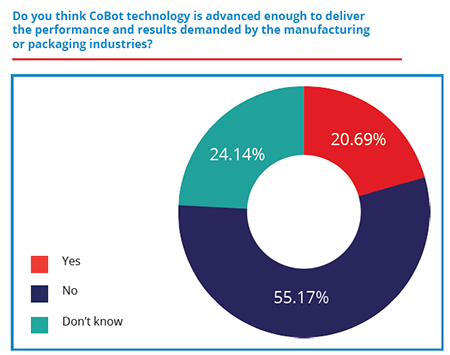 Revelations
That stat is nothing short of astounding. How can any cobot vendor feel comfortable about sales via distributors when over half of the distributor network is not 100 percent onboard with the product?

In addition, the survey found that 79 percent of distributors do not believe that “their customers understand the safety requirements of installing a cobot,” while another 10 percent are “unsure of their customers’ level of knowledge surrounding safety.” 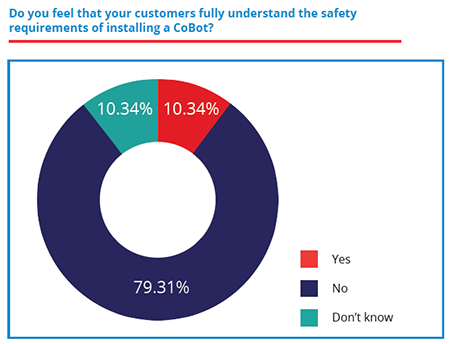 Integrators, the survey reported, “typically understand the safety requirements, but may not always be well-versed in cobot technology, because their expertise is in more traditional robots.”

Clearly, better communication—and probably a little more enthusiasm for cobots—is in order. There’s no telling what this kind of pushback has done to cobot sales. A significant drag might be accurate. 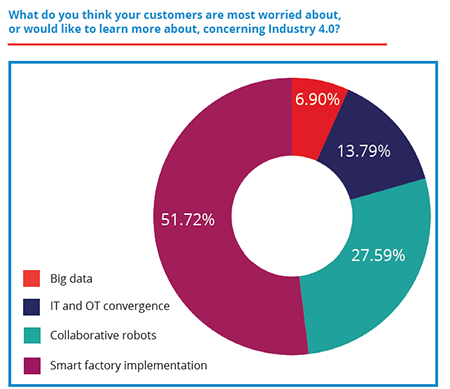 More to the point
Then there’s pushback on the tech side of cobotics. Rian Whitton, ABI’s senior analyst, calls into question what he calls “very visible inhibitors” regarding cobot technology that need to be overcome. “The hardware innovation is still trailing behind, and most of the value related to cobots does not come from collaboration. It comes through ease-of-use, reprogrammability, lower total cost compared to industrial systems, and re-deployability.

“In essence, the value is one of lowering barriers rather than building entirely new use-cases for robots. What is more, cobots still trail industrial systems in speed, performance, and payload, which will have to change if adoption is to continue at this feverish rate.”

No doubt purchasing agents, conducting due diligence on a potential cobot acquisition, are reading such reports as Whitton’s (BTW: he’s not alone in his take on cobots). Such reports can easily be off-putting to any potential buyer, especially SMEs contemplating a first-time buy.

Cobot tech too good to falter
The revolution that is the cobot is just too good to falter like this over what seem to be readily correctible perceptions. For the SMEs looking to build a cobot cell to relieve the pressure of low productivity or hard-to-find staff, today’s cobot offerings are nearly a godsend. Especially at the price points that range from $6,000 to $35,000, with ROIs that are measured in a handful of months.

We may never know what lack of such pushback could have meant for better unit sales beyond 14,000 cobots; and for that matter, all the cobot sensors, cameras, and grippers that also lost out on account of it.

It’s obvious that the story that is the cobot needs to be revisited, the narrative refreshed, and then rekindled anew for the customer. The cobot now has ten years behind it. It’s no longer new…except to the millions of members of that elusive 90-percent club who have yet to hear about it.

Then too, AI and the “adaptive” cobot, like Flexiv’s Rison, is on the horizon for all cobot tech to take note of: Cobots are about to morph.

The cobot industry has a great chance to make all the forecasters happy…and keep their glowing predictions and wowsy numbers on the money for next year and well beyond.

First stop: Eliminating pushback. It’s not that hard to do, especially with such revolutionary tech as the cobot.