Robots in Southeast Asia: The Big Next!

Vacancies filling fast
If you’re looking for new Asian markets for industrial robots, cobots, and parts sales, look closely at the real estate transactions for Southeast Asia. Supply chains formerly in China are beginning to do a dog leg south. More than a few already have.

FANUC may be a bit disconsolate about a drop in sales of Robodrills to China, but all it has to do is reorient south to Thai Nguyen, in northern Vietnam, where Samsung’s 60,000 employees punch out more mobile phones than anywhere else in the world. Some $58 billion worth; nearly 25 percent of Vietnam’s total exports last year.

Word on the street in China is that if your factory exports 20 percent or more of a product to the U.S., then better get the hell out of China fast, which is exactly what many manufacturers have been doing for a while. Worse, some have been forced to set up dual supply chains: one for U.S.-bound goods, the other for everywhere else.

New sales leads by the hundreds
Fifty manufacturers are moving some or all of their production out of China, most directly south, although Taiwan and Mexico are picking up work as well.

HP and Dell, which together shipped around 70 million notebooks globally last year (47 percent to the U.S.), make the computers in the Chinese cities of Chongqing and Kunshan. That’s coming to an end, which will also idle thousands of assembly workers in those cities.

“Ricoh, which had about 28 percent of revenue from the Americas last fiscal year, completed the transfer of production for high-speed printers to Thailand from Shenzhen, China, in July,” reported Bloomberg.

With 70 percent of the world’s electronics assembled in China, the fraction now moving south, although substantial, is not a China-killer. “Total Chinese imports and exports in the electronics segment ballooned 136 times to $1.35 trillion in 2017 from just over $10 billion back in 1991, according to Chinese data provider QianZhan.”

Selling automation gear like industrial robots into such a fertile market has long been a salesman’s dream job, but not any longer, which is especially so for the electronics and automotive sectors.

The resulting boon to manufacturing in Southeast Asia, as the Nikkei Asian Review put it, “has industrial robot makers rubbing their hands together in anticipation that the region will follow in China’s footsteps to become a major market.”

It’s a hand-rubbing moment to which robot manufacturers have quickly and dramatically responded, beefing up their presence and sales efforts in the region.

As an example of the potential moving south, the Thuan Thanh II Industrial Park, about a 45-minute drive from Hanoi, is very busy booking up new residents wanting to set up shop immediately. Looking to avoid tariffs on Chinese products, some sixty components makers that supply Foxconn Technology Group and Samsung Electronics Co. have streamed into the industrial park in the past three months. “They need to get into Vietnam now—immediately,” says Peter Chang, deputy general director of Shun Far Land Development Co., operator of Thuan Thanh II.

Vietnam, Thailand, and India have done well, with more to come in the near future. Here’s a list of the majors that departed or are readying to depart from China: 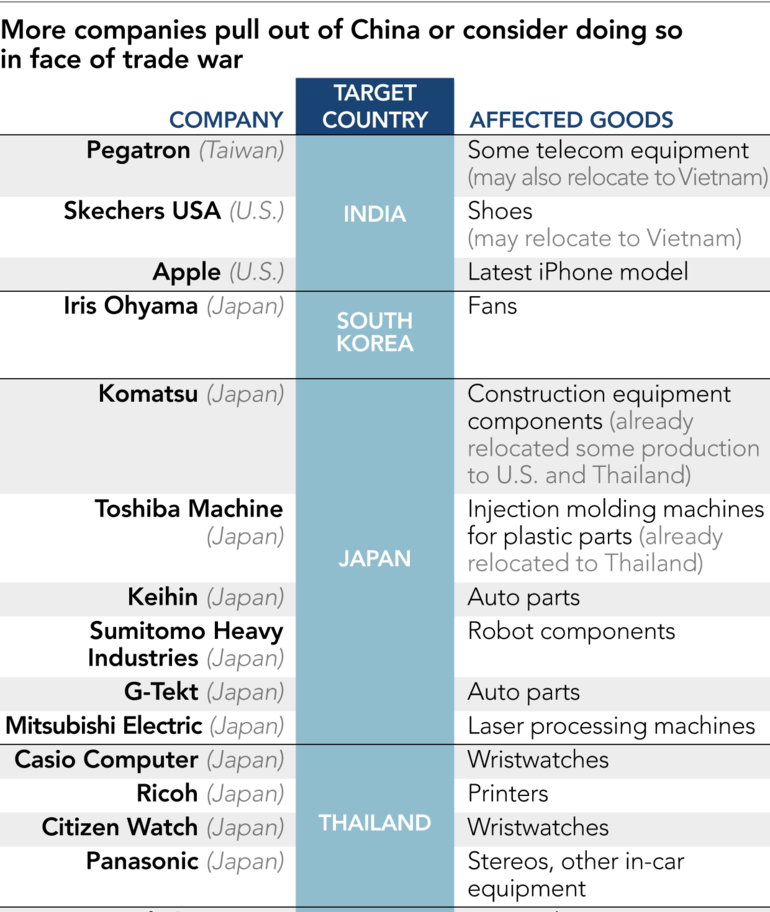 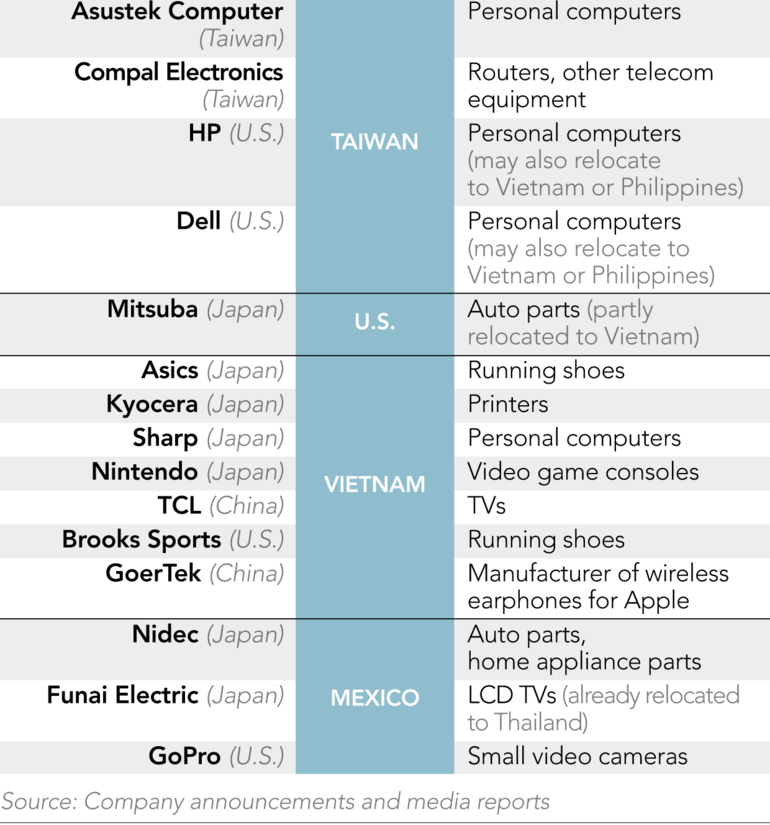 The value of infrastructure
When the long-awaited supply chain knocks at your door, you need to be ready to accommodate it. Thailand and Malaysia, both with superb infrastructures, have no problems making new manufacturing feel at home. Vietnam less so, much less so, but the government is responding well. As long-time Asian analyst Gordon Orr, noted in a recent article: “Vietnam – was clearly showing signs of being unable to absorb more market share without driving up labor and other costs even though it had only reached 7 percent of China’s global market share.

As Orr tellingly concludes: “It is a reminder of the importance of good government [China’s] over an extended period to educate workers to be able to shift from agricultural jobs to factories, to build the infrastructure that allows supply chains in these low margin markets to work efficiently and to provide the incentives to catalyze companies to invest.”

Ironically, and quite fortuitously, it will be China’s own Belt and Road Initiative that will further build out the needed infrastructure, enabling even more of China’s low-end manufacturing to slide south. China wants to build the high-tech trains for that infrastructure, with passengers on those trains using mobile phones assembled in Southeast Asia. A win-win for both—doubly so, as both struggle to avoid the middle-income trap.

Snug fit for robots
Southeast Asian manufacturers have evolved to the point where the use of robots is critical to higher levels of productivity, product quality and sophistication, while also augmenting declining worker populations and as a hedge against high wages. It’s the same shift made earlier by Japan, and now, by China.

Of course, low-end manufacturing and assembly will never disappear from China; it will more than likely become more automated or totally automated. It’s current share, on the order of 50 percent of all global low-end work, is too massive to eliminate. Besides, China’s own 1.5 billion population is still a fabulous market for low-end goods, so some large fraction of the total is always nice to have around.

From the perspective of selling industrial robots, cobots, and robot parts into this ever-expanding market with populations of 1.5 billion in China, another 640 million in Southeast Asia, and another 1.4 billion in India, it’s a never-ending opportunity with unlimited potential…that has come extra early because of the Sino-American trade war.