Say goodbye to vertical-specific expertise. With the aid and companionship of a digital partner—maybe even a robot—being a hybrid worker might well be the gateway to the future of all jobs…and a happy homelife

“Fully one-quarter of all occupations in the U.S. economy show strong signs of hybridization,
and they are almost universally the fastest-growing and highest-paying
—and also the most resistant to automation.”
—from THE HYBRID JOB ECONOMY: How New Skills Are Rewriting the DNA of the Job Market

Help wanted!
So, just exactly what are these new-age jobs that are going to save humanity from the grip of automation…and where are they now?

Well, they are here already and more are arriving faster than anyone thinks. Now that the sky-is-falling crowd is getting pushed to the side, there are some interesting insights popping up about workers, work, and the workplace that are making a lot of sense.

Consensus right now is that whether one is a butcher, baker, or candlestick maker we are all in the same boat together; and that boat is the Internet of Things (IoT), which is no big surprise to anyone. Regardless of occupation, career track, job, or field of interest, get used to the fact that no one will escape the pull of IoT. It’s local and global all at the same time, and is omnipresent in most everyone’s life, and growing more so each day. No one anywhere is now or will be immune.

And why would anyone want to dodge that which is so pervasive and inevitable in our lives? It would be like someone trying to hide out or escape from electricity. 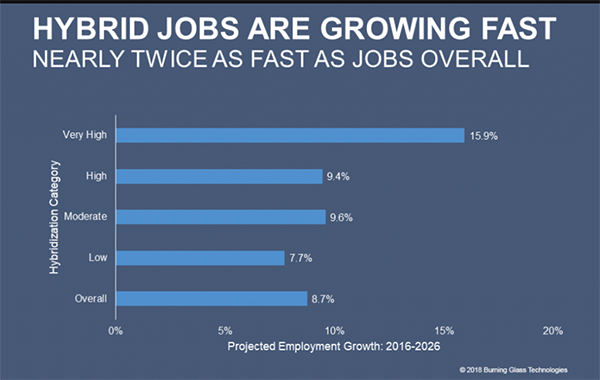 Most people are sensible enough to know that the wave of change is coming but need the skill set to surf it and not get sucked under. Most people are more than ready to learn, have the energy for it and are ready to commit, but they are starved for leadership and a sensible direction to follow. A blueprint! They need a blueprint to follow.

Two recent, separate, but highly related “blueprints” are out, and remarkably, both point in the same direction, and both exhibit the same common logic and common sense in what it takes to surf automation and thrive.

Being “hybrid” is in a nutshell what it will take.

Vertical-specific expertise is exactly what AI and automation are bred to operate in better than humans. Why try to be a John Henry competing with a machine to drive railroad spikes; he won but died in the effort.

“Formal education in IoT is the next big movement coming,” says Keith Flynn, director of R&D at AspenTech. “So many of the hot jobs of the future will be based around IoT that a regulated, formal IoT education is inevitable and, frankly, critical.

“The problems stay the same, it’s just that the tools have changed and rely more on cross-trades,” he adds. “We must combine the traditional project-deployment skills with new technology skillsets for evolution into one course and individuals need to be able to understand it all. Cross-trades ease the knowledge gap and everyone can speak the same language. It’s important when solving a problem and designing a solution to know all these different fields. That’s what will be achieved with an IoT education.”

Jobs have DNA
“The job of the future in this ecosystem is one where you have to be able to problem-solve in multi-dimension. With the rapid change of the tech landscape, new skills are now needed all the time, requiring more than vertical-specific expertise.”

A recent research study by consultants at Burning Glass, THE HYBRID JOB ECONOMY: How New Skills Are Rewriting the DNA of the Job Market, seems to bear out Flynn’s assessment of hybrid learning for hybridized jobs. “The jobs of the future don’t involve just one skill,” says Matt Sigelman, chief executive of Burning Glass. “There’s a breadth of skills that will be needed.

“While the competencies required for hybrid jobs aren’t necessarily new,” says Sigelman, “what is new is the marriage of skill sets that previously weren’t learned in tandem. Universities in many cases are already teaching all the necessary skills, but at the moment most students are trained “in pretty vertical ways,” he says, “meaning people learn one discipline as though it exists separately from other disciplines. Educational institutions must think outside of existing program boundaries.”

Hybrid workers, according to the Burning Glass study, “are also less likely to become professionally obsolete. Highly hybridized jobs have only 12 percent risk of being automated, compared with a 42 percent risk for jobs overall.”

Those hybridized jobs, continues the report, that are of high-complexity are growing at twice the rate of the overall job market, and are 20-40 percent higher-paying than their more traditional counterparts.

“No matter what role employees are engaged in, organizations expect them to be able to interpret data, leverage technical tools, apply their insights and work in partnership with other teams to present the big picture. Silo skills and mindsets are out; cross-over is in!”

“Algorithmic machine learning will be our intelligence amplifier, exhaustively exploring data and designs in ways humans alone cannot. The world was shocked when IBM’s Deep Blue computer beat Garry Kasparov in 1997. What emerged later was the realization that human and AI could combine to beat anyone, human or AI. The synthesis is more than the sum of the parts.”

Such intelligence amplifiers could well be companion robots.

MIT roboticist, Daniela Rus, director of MIT’s Computer Science and Artificial Intelligence Lab (CSAIL), thinks, as Tom Morgan points out above, that humans and robots in collaboration can combine to do a job better than either human or machine alone. As an example, she cites a Harvard University study comparing the ability of expert doctors and AI software working together to diagnose cancer.

In the future morning rounds at most any hospital may include a medical companion that’s a robot.

For the rest of us, a robot may well turn out to be the reason why we will succeed at our new-age hybrid jobs. Learning and mastering ever-newer technologies as well as life-long learning may be a job for our robot companions, after which they can then teach us what they have learned.