Has COVID Made a Difference?

Is a "human-like" companion just as good as the real thing? With loneliness rising to alarming levels, how about lonely hearts clubs where humans and robots hook up for lifelong companionship?

Months of COVID isolation and “social distancing” have made us all well acquainted with loneliness.

Maybe now we have more empathy for lonely hearts, sad solo households, Japan’s kodokushi (lonely deaths) of the elderly, and Jack & Diane lamenting: “Oh yeah, life goes on, long after the thrill of living is gone.”

Has COVID heightened a need for social robots in our living rooms?
Here, we reprise our pre-COVID look at social robots and their potential impact
on robot-human companionship.

Sadly, loneliness is rampant globally. Even worse, there’s one suicide every 40 seconds (by 2020 it’ll be every 20 seconds). The World Health Organization (WHO) estimates that each year there’s approximately one million suicides.  30 percent of the world’s suicides take place in China; evenly divided, 50 percent of all suicides are by women.

Remedy: Why not a robot companion?

There’s plenty of incentive: “The global personal robots market is expected to witness a CAGR of 37.8% during the forecast period, to reach $34.1 billion by 2022.”  —Research & Markets

Can lonely people find companionship with a robot?

Only the lonely
One of these Singles’ Days sooner than later e-commerce orders into online stores like Alibaba, Taobao or its cousin Tmall are going to sizzle with orders for personal robots, new, used or otherwise.

These future blockbusters aren’t for cleaning, although Singles’ Day is well-known for selling robot vacuums: last November 11th, Ecovacs rang up $47 million worth in a blistering 24 hours of e-commerce. Rather, personal here means a robot companion: a pal, a friend, a confidante and live-in buddy. A chum with which to kill time and share oneself.

Asia, especially China, has something more important for home robots to do than to sweep up dust; there’s a massive black hole of loneliness on the rise that needs filling; and it’s not just the aloneness experienced by ageing shut-ins.

Traditional, multi-generational family life in Asia, where everyone lives together, happily or not, is fading fast. For example, today in China, “160 million Chinese households, or 40 percent of the nationwide total, now consist of only one or two people.”  That’s a huge, looming problem in a country where familial harmony and togetherness are as old as Confucius.

Stuffing millions of those one-person or two-people households into massive, mega-multi-story filing cabinets is proving to be a perfect formula for high-rise loneliness or depression…or worse.

According to the Psychiatric Times, 30 percent of the world’s suicides take place in China; 50 percent of all suicides by women.

What about Korea?
The Korea Herald captures it well: “Recent statistics have shown that more Koreans are living alone, spending less time with their families while feeling disconnected to the world. From 2010-2015, the proportion of single-person households increased significantly from 15.8 percent to 27.1 percent.

“According to the Organization for Economic Cooperation and Development data last year, 28 percent of Koreans said they have no meaningful social support network at all — not a single person they can speak to or rely on — in times of crisis.”

And Japan?
Japan’s Industry of Loneliness similarly paints a bleak picture: “By 2035, 40 percent of Japan’s population will be living alone. They will wake up alone, make breakfast for one, go to work and come home to an empty apartment. It will be the norm.

“In fact, households including married couples will decrease by 23 percent according to research, and Japan’s market is gearing up for this shift by creating a variety of services marketed towards lonely people.”

Kim Suk-joo, a psychiatrist at the Samsung Medical Center in Seoul warns: “Social isolation is the biggest cause of almost all mental diseases.”

Then goes on to hint at how personal robots might fill the void: “When suffering from unfulfilling relationships with close friends and family, some people start to form relationships with objects and animals. You give meanings to them, and every single object becomes simply unreplaceable.”

It’s “some people start to form relationships with objects” that is the clue for an in-home, machine to potentially be an “unreplaceable” companion.

Regardless of the actual reasons, which aren’t expected to reverse themselves any time soon—if ever, millions of young, old and middle-aged Asians are being sucked into a void of loneliness at an alarming rate.

Ghost city test tube
With China’s former “ghost cities”, like Lingang on the outskirts of Shanghai, finally beginning to fill up with residents, there’s an eerie future awaiting new arrivals.

A greying couple moving into an apartment, say on the fortieth floor, experiences the eeriness immediately when they realize that to walk in the garden below is a forty-story elevator trip down and then back up again, when previous to moving in, a garden stroll was merely a few feet out the back door.

It’s a new reality of displacement and then replacement somewhere that doesn’t resemble home in the least, where family and friends are either far away or too busy or too disinterested to visit.

In an article “Will China Get Lonely Before It Gets Rich?” Foreign Policy writes: “Three demographics increasingly stand out: Unmarried young workers, couples who have delayed or foregone childbirth, and elderly empty-nesters…In the decade between 2000 and 2010, when urbanization was at full throttle, the number of solo households doubled, and the number of two-member households increased by 68 percent.” 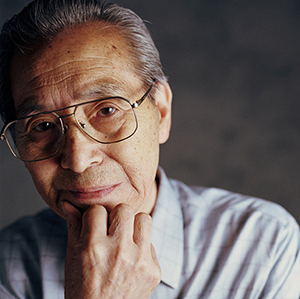 The lonely crowd
The NHFPC statistics on China are grim:

See related:
After 12 Years, AIBO’s Out of SONY’s Doghouse!

What next? Is it too late to recapture the magic
that made this robot dog loved by so many? 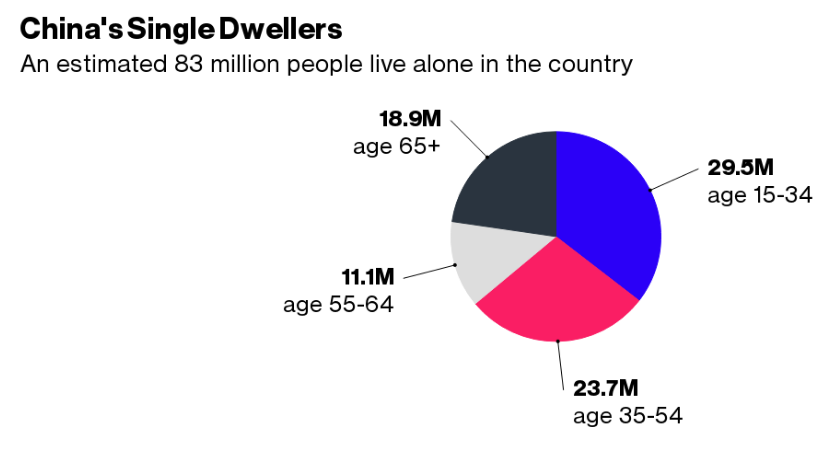 Jean Yeung, director of the center for family and population research at the National University of Singapore cites the following on China’s one-person homes:

“China had 66 million registered one-person homes in 2014, or 15 percent of all households, compared with 6 percent in 1990, according to government data. The actual number may be as many as 83 million — more than the population of Germany — and could rise to 132 million by 2050.”

China’s largest matchmaking website has published the results of a loneliness survey it conducted from 67,467 samples. The findings:

Is this monster-size demographic on loneliness a prime addressable market for robot companions? Seems to look that way.​

​Why not sleepovers with robots?
From what the Asian lonely are presenting, any intervention from human to pet to maybe even a compassionate smartphone would be appreciated and probably effective on the target population.

Unfortunately, today’s personal robots aren’t equal to the imagination’s perception of how they should perform. With Hollywood robot movies shaping expectations, many potential buyers think a personal robot should be dexterous enough to fold laundry, be adept at flipping an omelet, and skilled enough to teach its owner how to tango…in French. Short of that, disappointment is the first reaction; and harsh scrutiny thereafter directed at any newbie machine coming to market.

With so many personal robots being offered for sale these days, some of which have a very solid set of capabilities and winning personalities, how best to marry one up with a compatible lonely human? 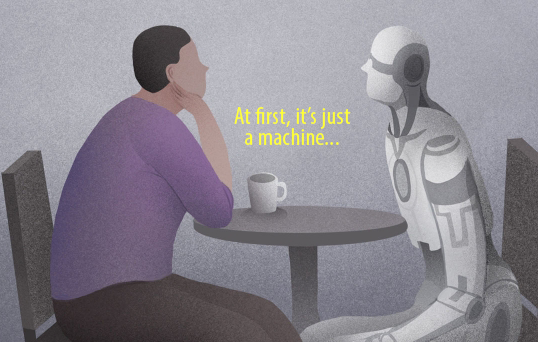 Delivering up personal rental robots, maybe like Robots as a Service (RaaS) might be most effective. It’d be like a lonely hearts club for humans and machines.

The RaaS provider would deliver a short-stay robot to a customer’s home for a brief few nights of sleepovers for a compatibility test. With so many personal robots for sale, finding just the right robot might take a few months.

The RaaS provider would continually introduce a new robot, along with a few pointers on best ways to make friends, then return a few nights or a week later to review the hook up. If a match was made, super! If not, try again.

Eventually, many would find a compatible robot mate with which to share the days to come.

The results of humans and robots living together by the tens of thousands might quell Dr. Suk-joo’s fears about the deleterious effects of loneliness, and might also power a profound change in attitudes by humans toward robots in general.

Those robots down at the factory might not seem so fearful any longer; they’re just machines doing a job like the personal ones that live with people. A difference in degree, not kind.

Robots would get better at being companions through upgrades available by download; or through AI (artificial intelligence) “learning” the art of companionship by living it.

As Daniela Rus, MIT’s Director of the Computer Science and Artificial Intelligence Laboratory (CSAIL), wrote in her The Robots Are Coming: How Technological Breakthroughs Will Transform Everyday Life: “This range of functionality has been made possible by innovations in robot design and advances in the algorithms that guide robot perception, reasoning, control, and coordination.

“Robotics has benefited enormously from progress in many areas: computation, data storage, the scale and performance of the Internet, wireless communication, electronics, and design and manufacturing tools. The costs of hardware have dropped even as the electromechanical components used in robotic devices have become more reliable and the knowledge base available to intelligent machines has grown thanks to the Internet.

Even a physical change in a robot might be welcome, like buying a new model Camry, as long as the core personality of the robot could be transferred to the newer model.

Imagine the potential for someone like Jack Ma and his Alibaba empire renting tens of thousands, maybe more, personal robots into lonely homes in Asia. Then closing sales with happy customers after their robot sleepovers awaken to a new way of living.

Imagine again, Jack Ma adding to his string of impressive job titles, one that reads: Emperor of Asia’s Lonely Hearts.  Loved by millions, it could well be his online legacy…Emperor Jack.

Now imagine a Singles’ Day in the not-to-distant future, when instead of millions of robot vacuums being purchased, personal robot orders will flood e-commerce sites.