The Cobot Guys from Genoa

The Cobotics World Catalog & Database of Cobots and Grippers

Your Guide to Cobots & Grippers
In the history of robotics, there’s been nothing quite like the reproductive ability of cobots. Rabbits, gerbils and cobots multiply quickly. Daily, right before our eyes, cobot numbers seem to be on the increase.

Sorting through all of sleek machines and cool technology that make up global cobotics can be more than arduous without a good guide.

Now we have one: the Cobotics World Catalog and Database. Built and curated by a group of Genoese engineers with years of experience working with cobots. We’re honored to include them at Asian Robotics Review. 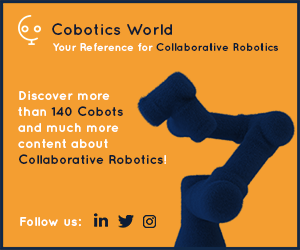 The Cobotics World Database is the absolute best way to sort through the 140+ companies building cobots and the nearly three dozen makers of grippers.

The Cobot Guys from Genoa are Tomaso Manca and Davide Labolani, co-founders of start-up HIRO Robotics (Italy), makers of the HIRO VS4 Robot Vision Guidance System.

In addition to being very busy as co-founders of a cool new company, they have also found the time to put lots of energy into building and curating The Cobotics World Catalog and Database of Cobots and Grippers. Bravo e grazie, Tomaso e Davide!

The ever-energetic, hard-working Tomaso and Davide also have their own blog, another labor of love. Asian Robotics Review will also carry selected blog entries from the Cobot Guys. China: How Cobotics Can Change and Save a Country is included here for your review and consideration.

Please help us to welcome to our pages The Cobotics World Catalog and Database of Cobots and Grippers.

China: How Cobotics Can Change and Save a Country
What Chinese industry is experiencing is not a simple transition to a new era of automation but a radical revolution from the ground up of a country that wants to break its reliance on foreign technology and pull its robotics industries up to the European and North American standards.

Thanks to the Made in China 2025 industry policy, the Chinese robot market value has exceeded over 15 Billion euros in 2017 according to HIT Insight Group and it has reached its historically highest-level fighting against the dependence on imports for core components and profit from pure system integration. Chinese robot makers are now prop up with financial support both from local governments and private sectors and top companies are acquiring promising foreign assets.

But now, while the Chinese robot market seems to be on the right path to get finally closer to its maturity, a new dilemma might arise. How could the world most populous country, who relies for 97% on SME, sustain a fully automated scenario without shocking its social structure?

The answer is Cobotics. China is leading the explosion of the cobot market with a demand that is increasing by 110% per year, 50% more than the global average, and it is ready to become an example for emerging countries by laying the foundations of an alternative cobotics-oriented investment model.

Unlike traditional robots, cobots are not designed for a fully automated and large-scale scenario but they could answer the needs of small and medium size companies by assisting workers and creating a more flexible workplace where the two actors, humans and cobots, can closely cooperate and together produce outcome that neither could deliver in isolation.

The cobot market is blooming and Chinese robot makers are eager to catch up with their international competitors. HIT Robot Group, Aubo, Siasun, Rokae and Hans Robot are already well-known brand on the market but startups like Jaka, Elibot and Yteam join the competition with strong investment.

The cobot demand is not going to stop growing and HMC Invetsment Securities forecasted 735.000 units sold by 2025. Universal Robot, the market leader with more than 50% share, has deployed about 30.000 cobots in the last 5 years but this is far from satisfying the huge demand that is coming.

Who will meet this terrific market? China is getting ahead of the game and it is anything but unlikely that the next category leader may come from there.