Natalie and Jeff review how growing businesses institute new technologies, they address how employers can preserve employee morale by proactively explaining the benefits of automation initiatives, such as reduced injuries and better job satisfaction. Natalie and Jeff also explain how businesses that integrate automation successfully experience increased productivity and profitability, and thus gain a competitive advantage in the marketplace.

[00:00:02] Welcome to the Littler Artificial Intelligence & Robotics podcast conversations about employers integrating robotics and A.I. systems into their workplaces in the United States and worldwide.

NATALIE [00:01:27] Jeff I want to just start by asking you about the impact of automation on job workforces. Workforces often concerned about their jobs when they start seeing robots appear on the factory floor.

JEFF [00:01:46] We look at this situation over a 20-year period and what we found was just the opposite of what you would expect. And I would hope that this would give some comfort to workers. What we saw is that whenever robot sales in the United States went up unemployment went down. And when robot sales went down unemployment went up. So, this doesn’t look like a job killer. In fact, if you look at the period from 2010 until today this record period of robot sales in the United States, unemployment has actually fallen from close to 10 percent to near historic lows below 4 percent.

So, I think that what we’re seeing is that the real threat to jobs is when companies can no longer remain competitive that’s when all the jobs are at risk. Companies that are automating are often the most successful companies creating and saving jobs. And we’re seeing this around the world in economies where robot use is high. Often the economy is stronger. And so, I really hope that that provides some comfort to people although if your job is the one that’s impacted, I can certainly see why that’s an issue. But many employers now are retraining workers for better jobs that allow them to use their brain.

NATALIE [00:03:09] Ok. So, I’m glad we’re starting on a positive note because this really is a hard part designed to address issues around employee morale. So, let me follow up with this. Of the many company members you’ve helped counsel and train over the years, can you share any particular success story around how a company successfully managed keeping employee morale positive through adoption of automation?

JEFF [00:03:38] Yes, this is something that we focus a lot on in our association. Companies that have been most successful I believe are ones that explain to the workers upfront what they’re doing, why they’re automating and how their jobs are going to change.

I think of companies like Marlin Steel in Baltimore. They were faced with this tremendous competitive challenge from China where Chinese companies were able to make the same product that they did and ship it over to the U.S. for less than it cost Marlin Steel to buy the steel to make the product. So, they were faced with the choice they’d have to shut down or ship the jobs to China to manufacture their baskets or try and automate, which is what they did.

They trained their people whose jobs were changed. They provided retraining for them. And as a result, injuries went down in their company, productivity went up, and the company became so successful that not only did they save their business but after a while they were able to start exporting their baskets back to China. To me that’s a great example of a company that’s did it the right way.

The real issue as I said is this need to be globally competitive and if you look at the U.S. compared to China or the E.U. or Japan, or even Korea they’re making much greater investments in automation.

Because the worst thing especially for employees is if all the jobs go away. I mean, we tried shipping jobs in manufacturing to China or Mexico or places where there was low cost labor and that didn’t work out so well.

We don’t want to do that again.

What we want to do is take advantage of the best technologies available to us. And I think there’s a lot of great technology out there right now. And if employers wait, they’re going to be falling behind.

You know there’s so many small and medium sized companies that never thought that automation might be right for them and are now starting to take a look at this because they recognize this is what you need to do to compete Yeah.

NATALIE [00:11:24] It is amazing how quickly new technologies are coming out, and as we were mentioning earlier, how much easier it is to use something like a collaborative robot to really increase efficiency and productivity. And it’s also amazing, I think some employers would be surprised about the cost associated. I think there’s still some sort of thinking of robots as huge industrial robots that are cost prohibitive. Have you seen more adoption? I mean, you mention the one example with Marlon Steel in Maryland. In the last let’s say five years, have you seen smaller companies really making that investment. And if so why.

JEFF [00:12:19] Yes, we’ve definitely seen more and more small and medium sized companies investing in robotics over the past five years or so. And that’s why I think one of the reasons why we’re at record numbers of robot sales in United States.

You hit on something earlier: ease of use. A lot of these smaller and medium sized companies don’t have the engineering resources to implement big robot systems. They don’t have the floor space to implement with traditional industrial robots that need to be safeguarded. So, they’re very much intrigued by collaborative robots.

Now just because they’re easier to use, just because they may be less expensive upfront, doesn’t make them right for every application. But even then, if companies were intrigued enough by collaborative robots to learn about them, they often find one for their particular application. Traditional industrial robots would work, now that the prices of traditional industrial robots have fallen dramatically as well. So, I mean if you’re out there trying to buy any kind of robot, the cost has come down radically over the years.

NATALIE [00:13:25] So that’s a great reason for adoption. What about communications with employees? Have you seen that companies are sort of afraid to communicate with employees that they’re going to be making these investments. And then one day you know these new technologies show up, or have you found that more companies are sort of doing something to plan a communication strategy, so that they’re not going to have a negative reaction.

JEFF [00:13:59] I think the most successful applications are the one where there’s great communication strategy in place before they begin implementing the robotics technology or other automation technologies. And so, I think that more and more companies are doing that.

I think if you look at it from the employee’s standpoint, they want to know what’s going on. They want their companies to be successful. Drew Greenblatt who’s the CEO at Marlin Steel said to me one time he said nobody asked me how many jobs we would have here if we hadn’t automated. The answer was zero.

And oftentimes robots and automation are the best tools. So, I think employees want their companies to be successful. They embrace the technology as long as it’s made clear to them why their employer is doing it how it impacts their job and how they can benefit from it. 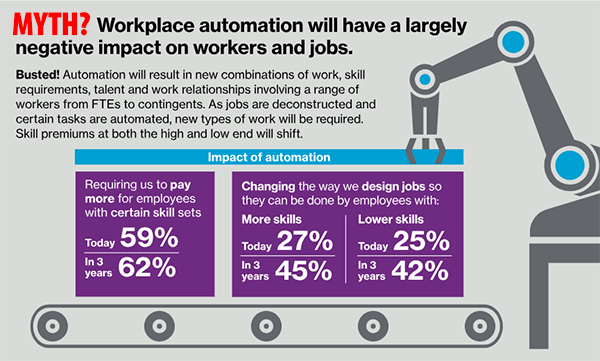 NATALIE [00:15:02] Now a lot of these jobs once the technology is there, and they do shift. Have you seen employers sort of use transition with employees to a different and new job?

Companies can’t fill the jobs that are open. And I talked to a company on the west side of the state of Michigan. Their problem was they would hire people for some of the introductory jobs that were kind of dull and dirty and dangerous, and people would work there awhile then they would leave because they hated the job.

And as a result, productivity fell and quality fell. So, they decided to automate. They ended up winning more business because automation made their productivity go up and quality go up, and they hired more people ultimately. Some of those same kinds of people who were hiring now had better job opportunities. So, I think we have to look at it from that standpoint as well. Yes, you need to retrain workers whose jobs are changing, but you also have to make jobs that people want to do.

NATALIE [00:16:36] Jeff we’ve been talking about automation in the workplace but since you know that we’re focusing now on employee morale in general can we think of any ways how automation is improving the lives of workers outside of the workplace?

We talked about how robots and A.I. are actually in a position to help us live longer healthier lives, and have better jobs.  And if you think about it when you look at what A.I., for instance, is doing in medicine by helping doctors sort through all the medical research and figure out how they can develop specific treatment programs or even cures sometimes. That never could have been found but without automation or the drug discovery process where robots are testing 24 hours a day to try and find cures for rare cancers that oftentimes, because they’re so rare, nobody would have even tested.

So, I think if you look at just the medical part of it there’s a big benefit. But what about if we got to a point where we had driverless cars that were reducing the number of accidents on the road? Right now something like 40,000 Americans are killed every year in car accidents. But what if through robotics and driverless cars and A.I. we could reduce that even by 90 percent. Think about how much better our society would be.

We’d have more people creating more businesses and more jobs. I mean, this impacts us in so many ways that, I think. If you focus on our fears, we’re going to miss out on the opportunities that technologies like robotics and A.I. provide. 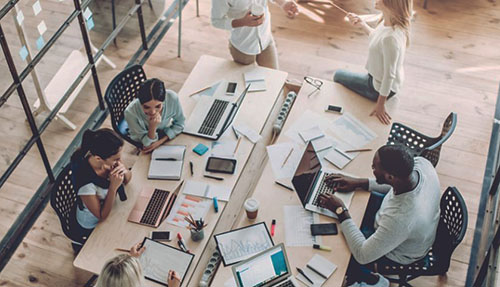