Are industrial robots looking at a sudden cost decline? It could be good news for everyone, including robot manufacturers

Asia Purchased 65.7% of All Industrial Robots

What Slowdown?
Although some robot manufacturers like Yaskawa Electric, FANUC, Mitsubishi Electric, and KUKA are moaning about sluggish sales and how they have had to downgrade their earnings forecasts accordingly, there’s really not much to moan about.

Sure, the sales scene is nothing like the boom beginning in the spring of 2017 when everyone was shoveling billions of Chinese yuan into Japan’s banks. However, Asia still bought in 2018 over 60 percent (i.e. six out of every ten industrial robots manufactured), which is a whopping piece of business, and the outlook through 2025 is for Asia to snap up 75 percent of the global output.

China, the main target of much of the sluggish sales woes, still bought in excess of 138,000 industrial robots. That’s 11,500 per month; more than a year’s worth of sales to France and Spain…combined!

“Foreign robot suppliers increased their sales in China by 72%, up to 103,200 units. This includes robots produced locally by international suppliers in China.”

For 2019 through to 2020, says IDC, industrial robots will grow CAGR of 25.7 percent; sales $125.4 billion by 2022. “By 2022, the size of the [entire] robotics market – robots, drones, and all related technology and services,” continues IDC, “will total $210 billion. Around half of that will be in manufacturing,” said John Santagate, research director of commercial service robotics, IDC. “Slowdown?” Santagate replied during a phone interview:  “What slowdown?”

None of the big robot manufacturers is throwing in the towel and heading off to Africa or South America to sell their wares anytime soon. They are gnashing their teeth hoping that 2017 could return real fast and deliver up once again all those glorious profits.

However, according to the analysts at ARK Investments, Wright’s Law is showing that those glory days may never return.

Such a nearly two-thirds drop in the average price of an industrial robot would definitely be a major cause for manufacturer worry.

So what’s Wright’s Law, and why is it so harsh on the future of industrial robot margins?

“In recent years researchers at the Santa Fe Risk Institute concluded that [using Wright’s Law] it can forecast the cost decline associated with any technology [industrial robots included].”

Such price shifts are due to “the workings of Wright’s Law, which states: for every cumulative doubling in number of units produced, costs will decline by a consistent percentage”. In the field of robotics that cost decline, also known as the “learning rate”, has been around 50 percent.”

As analyst Jim Handy explains it: “Wright discovered that progress increases with experience: each percent increase in cumulative production in a given industry results in a fixed percentage improvement in production efficiency.” 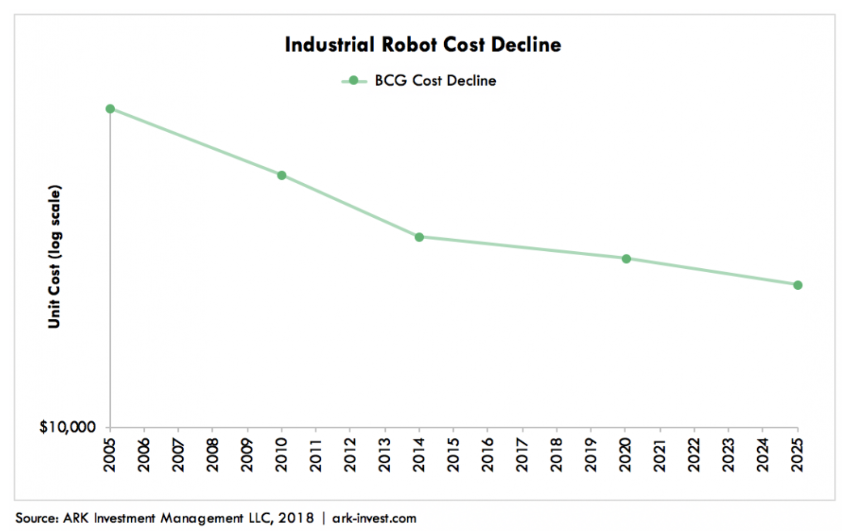 Tumbling prices, then, should make it easier to buy an industrial robot, thereby creating solid demand for many more.

Of course, manufacturers may groan ever more loudly in the realization that their $31,000 industrial robots are selling for only $11,000 apiece.  SMEs (producers of 70 percent of the world’s goods) will enjoy the price drop, and their demand for automation will accelerate sales dramatically. But SMEs, for the most part, don’t need the big-boy-size industrial robots; they want cobots.

Since in all of 2017 barely 3,000 cobots were sold in China (the same China that bought 138,000 big-boy robots), look for cobot sales to soar. Any robot manufacturer without a credible cobot in its catalog is in for a tough go of it.

Asia’s drive for productivity and competitiveness, plus the demographic time bomb of vanishing factory workers, will keep robot-driven automation alive and well throughout Asia.

When car and cellphone production slump, it’s not the end of the world for robot and robot parts sales. Diversification has taken hold. “Non-automotive industries cumulatively experienced more than 20 percent growth in orders during the first three quarters of 2018, compared to the same period in 2017.” Diversification is slated to accelerate to pharma, healthcare, agriculture, food production, etc. In short, anywhere and everywhere that needs to operate leaner and better will automate sooner than later.

The International Federation of Robotics is forecasting a population of 3.1 million industrial robots on the job globally by 2020; 2 million of them in Asia.

If Wright’s Law holds true, the increasing world population of industrial robots will be cheaper to buy, but none or very few of the 3.1 million will be “smart”.

Smart 4.0 manufacturing won’t tolerate “dumb” robots on the job, so how will all those dumb industrial robots get a few smarts? Smart grippers as add-ons? Maybe. Retrofitting industrial robots deserves strong consideration as a major new industry in the offing.

And “smart” is an industry that’s just getting going.