Robots are two decades off from stitching their way into my wardrobe. Then what?

Asia has a stranglehold on my wardrobe
Primping in a mirror before heading off to an interview, it suddenly crashed in on me that everything I was wearing was a product of Asian hands.

My New Balance 517s were Indonesian; my Calvin Klein T-shirt and Hanes Comfort Soft undies were made in Thailand and Vietnam respectively; my socks were from China; my Levi jeans from Vietnam; and my sports shirt was also Chinese, as was my Tropical Trends cap. 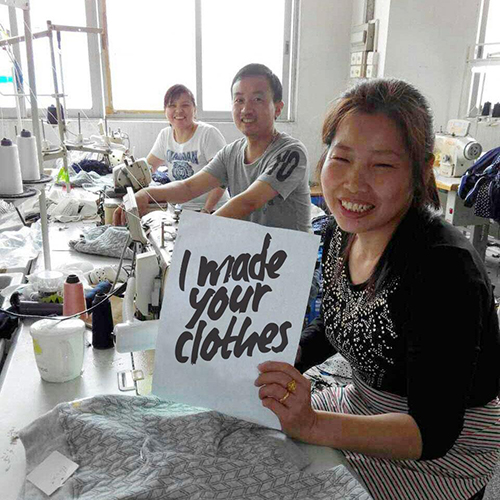 Although robots and automation are nipping at the edges of the garment business, you’ve got to stand in the din of a T-shirt factory to see how far off robots are from taking on the lead role in making clothes. There are 10-20 different steps needed to make a simple T-shirt; 70-80 for a long-sleeve dress shirt. From the inside of a T-shirt factory, automation disrupting clothes-making seems a million miles away.

Andrew Lo, CEO of the Crystal Group (Hong Kong), the world’s biggest producer of garments by volume last year, is betting on people, saying that robots could not compete on cost with human labor. In fact, he’s looking to increase his staff by 10 percent in Bangladesh and Vietnam.

Palaniswamy Rajan, CEO of Softwear Automation (US), inventor of the “sewbot” automated sewing robot, agrees, saying that his company could not compete on cost alone with workers in places such as Bangladesh. Adding in reshoring, energy savings, and far less of a supply chain is what he feels makes the sewbot a compelling choice (see video).

Developed with funding from retailer Walmart’s foundation plus $1.25 million from Defense Advanced Research Projects Agency (DARPA), sewbot has yet to see commercial success.

Sewbot moves fabric using two methods. “The first is a four-axis robotic arm that can lift and place the fabric using a vacuum gripper. The second is a 360-degree conveyor system which is a table of embedded spherical rollers. With each roller, or Budger Ball, moving independently at high speeds, the rollers can relocate the fabric or smooth the fabric as needed.

That’s a helluva lot of mechanical gyrations, engineering, and programming for any process, especially in making a lowly T-shirt. Sewbot’s complexity is mindboggling. Watching a woman at a sewing machine effortlessly putting together a T-shirt—dancing her hands and eyes between fabric and machine—magnificently showcases the mastery of the human brain.

What would AI think of sewbot?
Makes me wonder: What would artificial intelligence (AI) make of all this sewbot complexity? Can AI offer insight as to how best for a robot to build a T-shirt?

With many of the intricacies of garment production seemingly still firmly in human hands, there have been areas where robots have already won the day. As this Business Standard article points out, sweater making has fallen:

“At the Mohammadi Fashion Sweaters Ltd. factory in Bangladesh’s capital, a few dozen workers stand watching as 173 German-made machines knit black sweaters for overseas buyers. Occasionally the workers step in to program designs or clean the machines, but otherwise there is little for humans to do.

“It’s a big change from a few years ago, when hundreds of employees could be found standing over manual knitting stations for up to 10 hours a day. Mohammadi’s owners began phasing out such work in 2012, and by last year, the knitting process was fully automated.”

Even a behemoth like Amazon wants in; last year Amazon won a patent for an on-demand, automated apparel manufacturing system.

Looks like the world’s 60-odd million garment and textile workers are, for the time being, slipping out of the clutches of automation.

Software Automation’s Rajan reckons that there’s a twenty-year window closing after which humans may no longer dominate the garment biz.

It’s a precious twenty years, about the time it took China to ratchet itself up as the world’s garment king, and then to use that garment power to uplift millions out of poverty.

“Between 1981 and 2004, China succeeded in lifting more than half a billion people out of extreme poverty. This is certainly the greatest leap to overcome poverty in history.” —Robert Zoellick, World Bank.

Abject poverty, what the World Bank pegs at living on a $1.92 a day, was the lot of tens of millions of Chinese until freed by, yes, the garment sweat shop. China has now earned the luxury of moving up to higher-end manufacturing while pushing sweaty, manual factories south, or even to Africa. Bottom line is that human hands are holding their own.

The new, rising lords of manual garment making—Southeast Asia, Bangladesh, and India— will have twenty years to pull off the near impossible task of following China’s millions on their escape from a life of poverty.

But let’s make no mistake, the bell is tolling for manual labor in the garment biz. For now, Asia still dresses me. Asian hands make my clothes plentifully available, affordable, comfortable, and fashionable.

The woman making T-shirts, as well as her workmates, has a job for life. Her children do not; at least no job in the garment biz.

For the rest of us, we have a precious twenty years to figure out what to do about her kids.