Workplace Survival Skills in an Age of Automation

“When people believe they are getting better at what they do, a cycle of growth begins and is self-perpetuating.
Employees who are thriving actively seek opportunities to learn and develop, experiment with new ideas
to propel their learning forward, and take initiative in developing their careers. They also exhibit
more innovative work behavior and creativity.”
—SHRM Foundation

Only yesterday
Frank Burke said that the happiest day in his life was October 25, 1940; that was the day that the Fair Labor Standards Act created the 40-hour work week.

Frank had endured the Great Depression and survived war in the Pacific; he was married, father of three, and a grandfather, yet his happiest day was October 25th. He said that he wasn’t alone in feeling that way, all his fellow workers at the sprawling, open-air inferno called the New England Gas & Coke coking plant in Everett, Massachusetts, felt the same way, as if they’d all been released from bondage.

Slaves, not knowing for sure when their workdays or workweeks would end, he reminisced, and unable to plan anything in life beyond punching in at the coke works each morning…or evening…or whenever they were told to. Out of gratitude to President Roosevelt, who signed the bill into law, Frank and his mates would literally bless themselves whenever they said or heard the initials FDR, which was quite often during FDR’s long, three-term presidency.

My how times have changed
On November 12, 2018, seventy-eight years after Frank Burke had been freed from servitude, the Littler Future Workforce Roundtable convened in San Francisco at Littler’s headquarters, thirty-four floors above Bush Street.

The immediate need from the Roundtable’s guests was to offer up ideas and a suggested timeline for implementation on how best to free workers and workplaces from the consequences of technological disruption.

Forty experts, who had gathered together from around the world, sat elbow to elbow discussing, among other things, the very real possibility—according to more than a few future job forecasts—that just maybe there may not be any future jobs for anyone come the age of the robot and artificial intelligence (AI).

If anyone blessed themselves that day, it would have been for quite a different reason than Frank’s.

The Littler Roundtable
The immediate mission of the forty invited experts was to plumb the depths of a set of agenda questions in order to make sense out of how best to secure the future of global employment. A future that for a few years now has been called into question because of the disruptive influence of workplace automation driven by robots and AI.

So why these forty? Why now? Why was Littler taking on this obviously world-weighty question that many say even a crystal ball couldn’t fathom?

Garry Mathiason, founder and co-chair of Littler’s Robotics, Artificial Intelligence (AI) and Automation practice, as well as the founder and impresario of Littler’s Workplace Roundtable, summed it up succinctly for his Roundtable guests: For years, organizations have been discussing, studying and making predictions about the effects of “technology-induced displacement of employees,” also referred to as TIDE. Despite all the attention on TIDE, there is no organization specifically devoted to helping employers and their workers prepare for it.”

As the world’s largest law firm specializing in labor and employment law, said Mathiason, we need to help our clients and their workers navigate safely into this onrushing new world of work. Not to do so jeopardizes not only our clients and their employees but also our standing in the legal community which we serve.

Mathiason, and his co-chair of the Robotics, Artificial Intelligence (AI) and Automation practice, Natalie Pierce, also co-chaired the Roundtable. It was their job to skillfully direct the room of forty—in the space of a single day through a tightly-packed agenda—to elicit expertise and experience that Littler would use to launch a new organization that it has tabbed the EMMA Coalition. It will be for the EMMA Coalition to actively take up the cause of helping employers and their employees prepare for the TIDE.

The EMMA Coalition
The Emma Coalition is a non-profit, bi-partisan group that explains itself with the tag line: The Next-Collar Jobs for the Now Future.

The goal of the Emma Coalition is to help prepare the American labor market for changes brought about by TIDE,” Lotito says. “Currently, there is no employer-focused, non-partisan group dedicated to this issue, and the Emma Coalition seeks to fill that gap through education, training and engagement with policymakers.”

The timing for the launch of the EMMA Coalition and its reason for being fall in line with a recent McKinsey Global Institute report: Retraining and reskilling workers in the age of automation: “Executives [61 percent] increasingly see investing in retraining and “upskilling” existing workers as an urgent business priority that companies, not governments, must lead on.” 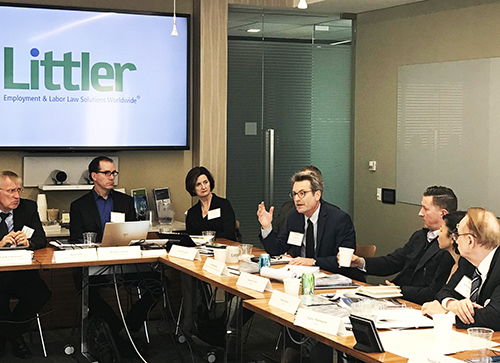 McKinsey forecasts that “[by 2030] roughly 14 percent of the global workforce—may need to switch occupational categories as digitization, automation, and advances in artificial intelligence disrupt the world of work. The kinds of skills companies require will shift, with profound implications for the career paths individuals will need to pursue.”

McKinsey refers to it as “epochal.” Indeed, that’s over 300 million people.

Interestingly, and to the point of the EMMA Coalition’s launch, McKinsey furthers: “So far, growing awareness of the scale of the task ahead has yet to translate into action. Indeed, public spending on labor-force training and support has fallen steadily for years in most member countries of the Organization for Economic Co-Operation and Development (OECD). Nor do corporate-training budgets appear to be on any kind of upswing. But that may be about to change.” Hence, the recent awareness among executives [61 percent] on the retraining and reskilling of employees as “an urgent business priority.”

All of which fits neatly into the EMMA Coalition’s next steps:

EMMA’s next steps
The Coalition’s first initiatives are to establish two advisory boards:

“The Future Workforce Advisory Board will identify areas of increased labor demand, as well as workers vulnerable to automation.”

“The Technical and Vocational Education and Training Advisory Board will identify existing best practices for worker retraining and vocational education and help develop curricula for the initiative’s training programs.”

Aligning with the two advisory boards will be the Coalition’s engagement “directly with policymakers and educate national political parties, Congress, mayors and governors on the challenges and opportunities of AI.”

With those next steps for the Coalition in mind, two of the Roundtable’s agenda questions jumped off the page for participation:

With both questions, the Roundtable came alive with brisk and very detailed input from the group of forty.

All of which inured directly to the benefit of the EMMA Coalition’s brain trust. In fact, there was so much new thinking contributed that more than likely the Coalition will need to digest it all and go through a bit of reformulation as it rolls out its campaign. And maybe that’s how it should be: Just get going and then adjust course while underway.

Littler is certainly faster than what government is capable of doing. McKinsey calls reskilling: “An urgent business priority that companies, not governments, must lead on.”

For Frank Burke and his mates at the coke works, as well as for twelve million other American workers, the Fair Labor Standards Act took eight years to become the law of the land.