This changes everything: China’s first smart factory where robots build other robots autonomously by the tens of thousands

Happy town for industrial robots
Shanghai is a happy place for business these days. Ying Yong, the mayor of this city of 24 million, presided over the 20th China International Industry Fair, China’s largest industrial fair, and its 280,000 attendees last October; and last November, greeted the first-ever China International Import Expo, hosting 3,600 companies from 172 countries, plus a welcoming speech from President Xi Jinping.

However, there’s no happier spot in the city for Mayor Ying than the 75,000-square-foot patch of real estate where ABB is building its new Kangqiao manufacturing center, which, according to ABB, will be “the world’s most advanced, automated and flexible robotics factory.” CNN has tabbed it “the factory of the future.”

By the looks of the digital shopping list of what’s going into the $150 million Kangqiao center, this advanced factory is quite a bit more than just an advanced factory, it’s a statement in the making. To paraphrase a bit from Star Trek, ABB is boldly going where no robot manufacturer has gone before. The Zurich-based, Swedish-Swiss, manufacturer of power grids, electrification products, robotics and industrial automation equipment, is building out the penultimate robot-driven showcase of the Fourth Industrial Revolution. Ribbon cutting is scheduled for late 2020.

Doing business in China since 1992, ABB is the robot sales leader in China’s $6 billion robot marketplace (total worldwide $16.2 billion) that in 2018 scooped up 135,000 robots (down 3.8% from 2017. Slower auto production and the cell phone slump caused that drop. But hey, let’s not quibble here; 135,000 industrial robots bought in 2018 is over 2,500 industrial robots PER WEEK!). China’s still the world’s robot- buying champ (buying one-third of all robots sold worldwide) and equal to the combined total from Japan, Korea, U.S. and Germany, according to the International Federation of Robotics (IFR).

Automation begets productivity
ABB is aiming to score a large percentage of that tenfold increase; plus, even more lucrative, ABB is aligning itself to take commanding leadership in Industry 4.0’s smart factory movement. According to ABI Research, smart factories will grow at a CAGR of 35 percent and will be worth $111 billion by 2026. And it just so happens that in addition to leadership in building robots, ABB, along with PTC, GE, Siemens, SAP, and Telit, is also a leader in digital factory development. And Shanghai is the place where ABB’s technology in both will come together.

“There’s a large shift away from looking at factory size and Capex investments as the way to meet future demand,” says Per Vegard Nerseth, managing director of ABB Robotics. “The concept behind our new factory is to make the smartest and most flexible use of every meter of production.”

More to the point was ABB Chairman Peter Voser, who told CNBC’s Akiko Fujita at the Nikkei Global Management Forum in Tokyo: “What will be driving the industries in the future is going to be automation, towards autonomous manufacturing. For that, you need robots, but it’s not just the robot itself as a product — but you need also end-to-end solutions for manufacturing. That’s why we are building this factory.”

Voser said the factory will serve the Chinese market where the manufacturing sector has a “great need to automate.”

All of that automation and end-to-end solution-finding are means for China to increase its speed of production and overall productivity, without which its massive population will be unable to thrive and its government hard pressed to remedy.

“An ageing population and domination by state enterprises are a recipe for weak productivity growth. The projected division between China’s young and aged populations by 2030 is stark. According to the United Nations’ forecast, the number of Chinese aged 20-24 will decrease 40 percent to just 81 million (6 percent of the predicted population) and the number aged over 60 is projected to rise to 362 million (25 percent of the projected population). The speed of this demographic shift will become more apparent, given the falling fertility rate, which dropped below the “replacement level” in the 1990s and currently stands at 1.60. Against this backdrop, automation is key to reviving productivity.” 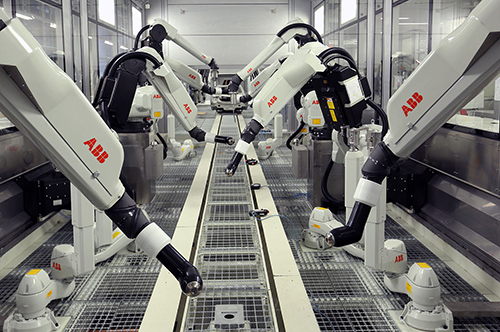 Smart as well was ABB also inking a “cooperation agreement” with the Shanghai municipal government for ABB expertise and tech “focused on supporting industry, energy, transport and infrastructure in the region,” which is part of the so-called “Made in Shanghai” manufacturing initiative. Think, ABB’s flash-charging technologies for all those soon-to-be electric vehicles that China will build…and ABB’s power transmission grid connecting up all of those charging stations.

For $150 million, ABB put a lock on its leadership position atop China’s robot automation movement as well as positioned itself for a shot at leadership atop China’s smart factory program.

Shanghai will be ABB’s showcase on how to do both.

Pioneering the next-gen factory
As Bloomberg noted, ABB’s Shanghai smart factory “capitalizes on China’s rising consumption and aspiration to transform into a technology pioneer.” The then-CEO of ABB,  Ulrich Spiesshofer, remarked that the new, smart factory will set out to “shape the next generation of manufacturing, the next generation of capacity.”

“Production is expected to begin by the end of 2020 and annual capacity will be around 100,000 robots, Spiesshofer told Bloomberg. The Shanghai plant…will be the company’s single largest robotics facility around the world, producing the full range of ABB’s products from small payload robots to large ones that can lift an entire car,” according to Spiesshofer.

It’s aim is to be the gold standard in the future for robotics factories, commented  Mario Maor of Interesting Engineering, “The concept underlying the factory is increased collaboration and making the most of every meter of production: ABB envisions the future site housing (1) collaborative robotics, (2) artificial intelligence (AI) research and (3) various digital technologies.”

ABB has been putting the pieces of this next-gen super factory together for some time now. A key enabler for manufacturing came in 2017 with the roll out of 180 products and software bundled together under name Ability, which, the company’s chief digital officer, Guido Jouret, explains as “turning ABB’s decades of industrial domain expertise into software offerings that our customers can access through the world’s largest and most advanced digital platform. With [Ability], our customers can achieve unprecedented improvements in operational performance and productivity.” Ability’s services include control systems, remote monitoring services for robots, motors and machinery, and energy management systems.”

Also in 2017, ABB acquired the Austrian automation company, B&R (Bernecker + Rainer Industrie-Elektronik GmbH), of which Spiesshofer noted, “closes ABB’s historic gap in machine and factory automation and expands our leadership in industrial automation.” With B&R, he said, “we are the only industrial automation provider offering customers in process and discrete industries the entire spectrum of technology and software solutions around measurement, control, actuation, robotics, digitalization and electrification.”

Yet again in 2017, ABB connected with yet another key resource in IBM, signing a collaboration agreement to ramp up its presence in digital technology and the Internet of Things (IoT). Spiesshofer said at the signing of that agreement: “This powerful combination marks truly the next level of industrial technology, moving beyond current connected systems that simply gather data, to industrial operations and machines that use data to sense, analyze, optimize and take actions that drive greater uptime, speed and yield for industrial customers.”

As an example, he offered, instead of manual machinery inspections, ABB and IBM intend to use Watson’s artificial intelligence to help find defects via real-time images collected by an ABB system, and then analyzed using IBM Watson.

This changes everything!
An article in Drives & Controls explains the factory’s unique, flexible floorplan. Unlike traditional, fixed assembly lines, the floor will be arranged as a series of interlinked islands of robot work cells that are easily reconfigurable for rapid change and customization. AGVs will attend the robots autonomously, supplying the robot cells with production parts drawn from nearby supply stores. “This will allow production to adapt and scale to changes in China’s robot market without needing extra capacity expansions.”

“The factory will be modelled as a digital twin, providing tailored dashboards to help managers, engineers, operators and maintenance experts to make the best decisions…As well as avoiding costly downtime, the digital technology can improve performance, reliability and energy usage, and provide access to platforms such as the Microsoft Azure enterprise cloud.”

ABB is not alone in questing after smart factory success. The World Economic Forum has identified nine other one-of-a-kind smart factories worldwide that, according to Enno de Boer, Global Head of Manufacturing at McKinsey, have realized performance increases between 20 to 50 percent.

How ABB’s one-of-a-kind, Kangqiao smart factory stacks up will take at least until the end of 2020 to realize.