Something’s happening, that’s for sure

The End of the Great Robot Scare

Is it a lull or true change? Something new is in the air…and it’s been a long time coming

Is the wait over?
Has the pendulum of fear over robots and artificial intelligence (AI) begun to swing away from doom and gloom?

Something’s happening, that’s for sure.

For starters, that something is a decided lessening of bad-robot rhetoric and the near-disappearing act of AI-induced, job-loss charts on daily news programs.

It appears that the mood of human vs. machine is beginning to change. The Upside Of Automation: New Jobs, Increased Productivity And Changing Roles For Workers by McKinsey senior partner, Kweilin Ellingrud, is but one of a spate of good-feel editorials emanating from news organizations, consultants, and research groups. It’s getting to feel like robot wariness is giving way to a sense of optimism?

Suddenly, things aren’t as dire as the Oxford Martin job outlook from back in 2013. Time has a habit of doing things like that. The recent uplift in news coverage was a needed dose of hey, the robot/AI scare isn’t as bad as we all thought.

In fact, the world has passed this way many times before, and curiously, has survived every past peril. That we’re all still here is proof enough. Humans don’t go quietly into the night. What’s happening these days may be a hopeful sign that The Great Robot Scare is transitioning into a kinder, nicer technological transformation.

Reading Spencer Weart’s The Rise of Nuclear Fear offers up some interesting parallels. If, for instance, you substitute robots and AI for every instance of nuclear war and atomic destruction in his book, a curious ebb and flow arises about how society reacts over time to perceived threats from technology. Humanity, it seems, is fairly nimble at confronting danger. 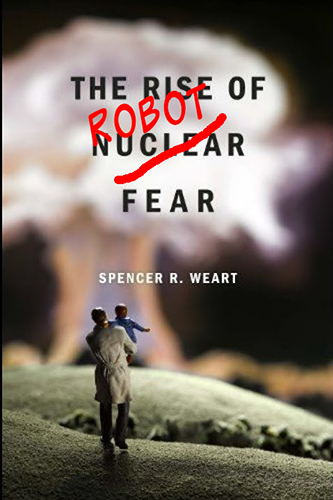 Just maybe, that’s where the fear of robots and AI are headed as well.

One thing very clear from Weart’s book was the seminal role of government as an agent for dealing with the rampant fear and psychological gloom of a not-so-pretty nuclear future.

He writes that in the 1950s President Eisenhower created the Atoms for Peace program, which included asking the United Nations to establish the International Atomic Energy Agency. The White House followed up with a glitzy PR campaign that declared “the Era of Atomic Power is on the Way.”

The scientific community was prompted to roll out the hope-filled International Geophysical Year (1957-58) marking a warming period of scientific interchange between East and West. It went a long way at putting a hope-filled face on technology.

Even Disney Studios was brought into the movement, with the White House footing the bill to produce the widely-viewed movie Our Friend the Atom in which Walt Disney himself declares “the atom is our future.” That declaration encouraged Disney to add Tomorrowland to his Dinseyland theme park, saying: “The Tomorrowland attractions have been designed to give you an opportunity to participate in adventures that are a living blueprint of our future.”

Disney was a solid example of government motivating private industry to take up an important social cause. Similarly, Korea has built an elaborate “living blueprint” for its robot future: Robot Land. It’s hoped that it will make a huge social imprint on Korea’s future.

Of course, thrilling theme parks for robots and AI aren’t cure-alls, but education is and that’s what the theme parks do best.  Although there’s been some world government attention at dealing with an impending robot and AI future, nothing yet anywhere as pervasive as Atoms for Peace.

Now that the pendulum of robot worry and job hysterics seems to be swinging toward more friendly climes, maybe now is the moment for world governments to act.

Going digital together
Global togetherness would be a positive way for dealing with global transformation. Aren’t we all going digital in the very same way? The Internet and cellphone bind world citizenry together; soon robots and AI will be the next level up in that binding process.

The United Nations has been absent from the reality of digital transformation. It has yet to escape from the self-inflicted trap of the “killer robot” controversy, so no broad robot/AI initiatives appear to be forthcoming as in the days of Atoms for Peace.  Education is a tool that can deal with “killer robots” but education takes time, which is a commodity that not many at the UN professes to have much of these days.

The World Economic Forum’s (WEF) The 5 stages of acceptance as robots enter the workforce, charts the phases that we’ll encounter: Fear, Apprehension, Curiosity, Tolerance, and Satisfaction.

The unknown can be a fearful place full of apprehension, which is in large measure where we’re at today, with curiosity just glimmering on the horizon. 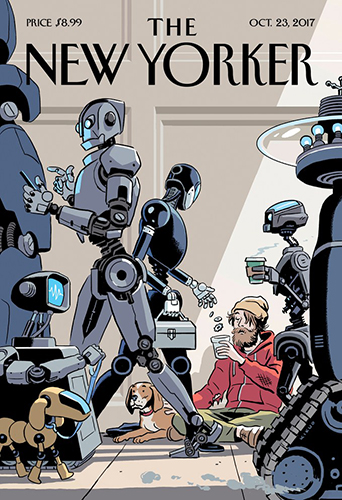 Fear, says the WEF, “is a perfectly understandable reaction considering the reputation that robots have. However, most companies take a very proactive approach towards helping their employees understand exactly why the robots are being introduced and how working with robots will make their jobs better.”

However, by working our way through Apprehension, looming on the other side are Curiosity and Tolerance that may help us to arrive safely at Satisfaction: “The final stage”, as the WEF puts it, “…where the robots become not just tools, but co-workers…This makes the job experience better for the humans who work with them. It’s easy to tell when this stage is reached, because the humans begin to anthropomorphize the robots, ascribing human-like personalities or emotions to specific robots that seem like they’re a little bit different from the others.”

Of course, nothing will be that simple, especially looking at the WEF’s map of the journey that Robotics and AI will take and what will be affected:

That’s a tall order! Education, with everyone getting on the same page, will go a long way to helping everyone through the WEF’s five stages.

Deloitte’s Are Your Employees Prepared For The Fourth Industrial Revolution? hits the education imperative as the only remedy:

“As a result of this rapidly changing landscape—in which workplace skills are turning over every 2.5 years—we must recognize that learning is key to career sustainability. Individuals have a career imperative to learn, and companies have an imperative to help them.

Someone needs to step up
With a lack of broad government intercession into imperatives to continuous learning like the “2.5 years” pointed out in the Deloitte study, individual companies have had to take direct action. AT&T is one. AT&T “initiated a massive retraining effort after discovering that nearly half of its 250,000 employees lacked the necessary skills needed to keep the company competitive.” AT&T will pony up $1 billion in direct training of its staff.

Transformation, however, will take lots more than individual companies trying to do it alone. We’re talking about massive world populations that need massive interventions.

Take, for instance, forecasts by the Boston Consulting Group and AliResearch Institute on China’s digital economy: “Home to the world’s largest population of Internet and smartphone users, [China] is likely to create 415 million jobs by 2035, bolstering technology’s share to 48 per cent of gross domestic product, according to.”

If all those jobs come to pass, will China’s population be sufficiently trained to take advantage of those millions of potential new jobs?

It takes more than the altruism and business sense of an AT&T to pull off good jobs for millions. It takes governments. World governments working together would be even better.

Now that the pendulum is on the move, the time is ripe for a bit of action.

Who is going to step up?