Making Pepper Run or Atlas Think ...or Both

Melding Atlas & Pepper
Pull off the chest plate of the new Atlas (next generation) and there’s a lot of new robot tech starring back at you. The folks at IEEE have done a nice job of sorting it all out. The boys and girls at Boston Dynamics, it seems, have been very busy lo those long years in Google captivity.

The brash and unruly creators of Atlas screened a video of their new creation for all the world to YouTube over…without first getting advance permission. Rebellion!

A former employee probably summed it up best: “At the end of day what I saw was a sense of us and them instead of a we – we weren’t part of Google, we were sort of a separate thing.”

Enter, Softbank, owners of Pepper, the sleekly designed humanoid robot that rolls around on wheels instead of legs, and has the emotional intelligence of a really, really young human…with an irritatingly wimpish voice.

Funny thing about Pepper is that for all its physical limitations, it sells out in seconds every time it goes on sale ($1800).

Right about now, we’re all thinking the same thing, aren’t we?

Is it possible to do an Atlas/Pepper body and mind meld? …Especially so because SoftBank now owns both!

The man from Gamagori
A guy from Gamagori, a roboticist by training and a builder of humanoids by choice, saw what we all saw in the Atlas bullying video: life.

Life beneath the metallic flesh of the Atlas (next generation) robot; the creation of Boston Dynamics that the YouTube universe watched get shoved, wacked, bullied and pushed to the ground over and over again. A bullied robot gone viral at 29 million views.

Atlas even made it to the late night TV with Jimmy Fallon for another four million viewers.

The man from Gamagori admitted to watching the video hundreds of times. He’d even edited the two minutes and forty two seconds of video down to a precious eight seconds that he considers the critical moment. That eight seconds he compulsively screens over and over again.

The eight seconds of fascination for the man from Gamagori comes at the point where the human uses the hockey stick to knock the ten-pound box out of the robot’s hands and then jabs the robot with the stick, pushing the robot back and away from the box. The robot recovers and heads toward the box again.

He’s got the eight seconds on a loop. Each time the video plays, his back stiffens to attention, his head stares intently at the action, and a rush of feeling that’s barely describable snaps through his entire body.

Atlas has sonzai-kan
Atlas he says, has sonzai-kan. Sonzai-kan, loosely translates from Japanese as “presence”. The robot evokes in him the feeling that he’s in the “presence” of another human; human recognition that he innately and solely reserves only for humans, never for other living things like animals, and certainly never for machines.

Pattern recognition of a human’s shape and how it moves is the key trigger, he feels. Atlas moved like a human; especially its balance was humanlike.

He was personally both shocked and enlightened watching Atlas move.

The primordial limbic brain knew pattern recognition well; mis-recognize a predator for a friend’s shape, and you got eaten. Since the primordial eye could see—and only indistinctly—shape, direction, speed, and little else, survival depended on recognizing patterns.

Stunningly, he admits that even after three decades of building humanoid robots in Japan, he’s never felt sonzai-kan from any of them.

When he’s in the presence of Asimo, Pepper, the Geminoid androids, HRP-4 or the singing HRP-4C, they all seem to him now like a bunch of schoolkid projects costing multi-millions of dollars but hitting zero on his sonzai-kan meter.

Japanese humanoids, he contends, just reuse and repackage the same old, low-hanging fruit of humanoid robotics over and over again. For decades now it’s been all about mastering the redundant. There’s been no stepping beyond to pioneer the totally new; no attempt to evoke “presence” 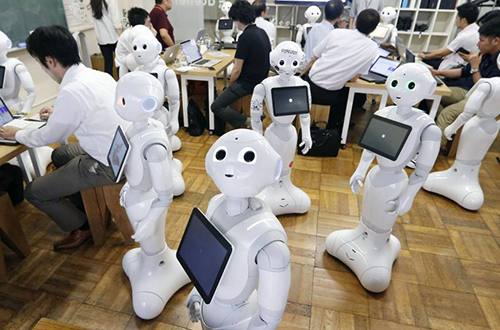 Atlas showed us something new and different, something missing that had now been found.

So, what was it that fascinated millions of people while watching two minutes of Atlas traipsing over snowy ground cover and a then being tormented by a guy with a hockey stick?

Every human watching the video instantly recognized the human-like pattern of movement and balance that are indelibly etched into everyone’s limbic system.

Atlas fit the shape and pattern, and everyone watching sensed that the familial shape was in an unequal battle with a very intelligent beast wielding a stick. A battle that Atlas could not possibly win or even escape.

So what did we all do?  He stopped the video loop and just stared at a lone still frame. “When we see and feel sonzai-kan, we next exhibit compassion and a need to help…a machine that’s no longer a machine to us.

“And that’s the first time a robot ever made me feel that way.”

If he was alive today and had just watched the uncanny balance and agility displayed by Atlas, Japan’s great humanoid roboticist, Ichiro Kato (1923-1994), would undoubtedly be asking the question: Why are we taking these long, strange journeys separately instead of together?

Kato and his band of researchers at Tokyo’s Waseda University built the world’s first walking robot in 1973, the masterful WABOT-1, which could walk and navigate, use its hands to grip objects, could see, hear, and communicate in Japanese. Their WABOT-2 from 1980 had a better brain and could play the piano.

To a very large extent, locomotion in humanoid robotics hasn’t really advanced much in the nearly 40 years since.  That is, of course, until Atlas recently rambled across millions of YouTube screens.

Unlike most any other areas in robotics, bipedal humanoid robotics is attempting to take on the most superb builder in the universe, none other than Mother Nature herself, who has a 5-million year head start in building human legs and their interaction with a human brain for balance and agility.

Mother Nature has artfully arrayed over 240 muscles in the lower limbs of humans. Mastering each one or groupings of muscles has been a nightmare for robotics to understand and then transfer to a robot’s locomotion, says Waseda’s Atsuo Takanishi, former Ph.D student of Kato’s, and now the technical and spiritual guardian of Kato’s work.

A humanoid robot, by definition, is a near-impossible robot to build. So, why make it more difficult than it needs to be? Why not pool all humanoid developers together, much like CERN, the European Organization for Nuclear Research, whose physicists and engineers from 42 countries are probing the fundamental structure of the universe…together!

An enlightened acquisition
Atlas has now escaped to the open arms of Softbank and its free-spending CEO Masayoshi Son.

As Son-san says of the marriage: “Smart robotics are going to be a key driver of the next stage of the Information Revolution, and Marc [Raibert, CEO] and his team at Boston Dynamics are the clear technology leaders in advanced dynamic robots. I am thrilled to welcome them to the SoftBank family and look forward to supporting them as they continue to advance the field of robotics and explore applications that can help make life easier, safer and more fulfilling.”

If the House of Atlas and the House of Pepper share their abundant intellectual property (IP), plus also share the brainiacs that made the IP with the brainiacs from, say, the Humanoid Robotics Institute at Waseda University, plus those kindred spirits from Japan’s corporate humanoid developers like Honda, then Mother Nature could have a real challenge on her hands.

Technology’s most difficult robot to create just might have a fighting chance.​