Grippers: Robots Aren’t Much Without Them

Who are the gripper-meisters? What are they mastering now…and why?

Grippers as brainiacs!
Amazingly, every industrial robot at birth is totally incapable of doing any work whatsoever. They can raise and lower and twist their arms through their many axes; they can look brutish or elegant or remarkably innovative, but that’s it. They are unfit for work. They are incomplete.

Not ready for work
Every industrial robot, even the new, wildly popular cobots, are all born without hands. And until a mechanical hand—or end-of-arm tool (EOAT), or gripper as they commonly known—is affixed to the tip of a robot’s arm, a robot is, well, useless.

What other machine of equal importance to the industrial robot has such a crazy beginning to its working life? Virtually none.

And there are lots of robots in search of hands. The International Federation of Robotics forecasts that by 2020 there will be in excess of 3 million industrial robots in the world, which is nearly equal to the population of Buenos Aires.

The forecast for that newest of industrial robots, the cobot, has Loup Ventures speculating on epic shipments by 2025: 434 thousand annually!

Millions of jobs exist for robots to do, yet robots need an interface to accomplish even the smallest of them.

A gripper is all that exists between the job to be done and a robot’s outstretched arm; it’s the business end of any robot’s capabilities at manufacturing and logistics. That critical connection, says Bob Hoffman, Swisslog’s senior director of engineering and consulting, is like having a robot on the end of a robot.

Although most every industrial robot manufacturer can supply a buyer with an EOAT or gripper upon request, the development of the best of these toolings has always been the province of highly specialized manufacturers since the late 1970s.

The provenance of the first readily controllable gripper for industrial robots goes back to 1969 with Victor Scheinman’s Stanford arm.  Notice, it wasn’t called the Stanford “gripper”.  Scheinman’s invention introduced the parallel gripper—still common today—consisting of “two straight-bar fingers actuated to simply slide together or move apart to grip and release objects.”

State of the Art Robotic Grippers and Applications, Kevin Tai et al (2016), displays the wide variety and extensive uses of grippers that have arisen since Scheinman’s invention. Today there are some fifteen specialized gripper manufacturers offering pneumatic and electric powered grippers for manufacturing; and more recently, a rush of new vendors into the marketplace with interesting solutions for logistics, especially for e-commerce bin picking. 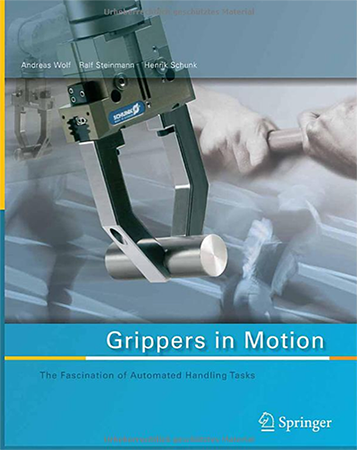 Henrik Schunk et al point out in their 2005 Grippers in Motion: The Fascination of Automated Handling Tasks how gripping is more than just holding a workpiece. “Gaining information on the workpieces and ambient conditions of a specific handling task,” they contend, “becomes more and more important for process reliability and offers considerable potential for faster handling applications at a lower cost.”

Gaining knowledge and experience with the processes going on around them—in addition to holding fast to a workpiece—seems exactly where smart gripper tech is headed.

Finally, the real work begins
Now that Operations Technology is getting serious about the innards of Factory 4.0, especially trying to breathe all manner of intelligence into every machine on the shop floor, the “robot on the end of the robot” is coming up large as a potential seat of intelligence, maybe even the eventual maestro behind factory-wide production and productivity.

With robots and their sensor arrays having successfully dealt with keeping nearby humans safe as well as predicting when to alert the doctor of an impending robot ailment, robots can now turn their sensors and edge computing power to the real game afoot: producing high-quality goods, increasing output and reducing costs.

Digitization, miniaturization, sensors, new chips, edge computing and artificial intelligence are bringing new possibilities to the advance of gripper tech, and because of it the gripper is awakening to the idea of being smart.

The long-lamented decline in global manufacturing productivity (latest warning hails from Sweden) has a real opportunity at resurgence with the advent of smart grippers. As the prime interface between workpieces and finished goods, the potential for a trove of data points flowing from a gripper is without peer on a factory floor.

It is with companies conjuring up new software ideas like those at the recently formed Oden Technologies (2014) where intelligent manufacturing can manifest itself in a workflow, turning all those data points into actionable production knowledge that will help to switch on a revolution in smart gripper technology.

Oden, as their product pitch says, offers manufacturers the ability to “perform detailed root-cause analysis down to the second, keep an eye on factory-wide performance in real-time, or understand output trends over days…Empowering manufacturers to eliminate waste, increase output, and achieve perfect production.” Oden is but one of a new gang of AI pioneers in manufacturing.

Combine those kinds of production analytics with ruggedized, on-gripper, mini- PLCs (programmable logic controllers) that automate machine control in real time, and the vision of a factory as a humming, cyber-physical hive of autonomous “smart” machinery begins to emerge.

That a robot gripper can be central to a factory-wide, cyber-physical workflow is a new realization, but it’s an idea whose time has come. And progress is arriving fast.

The rewards are there to be had: Forecasts contend that smart manufacturing will increase “production capacity up to 20% while lowering material consumption rates by 4%.” That forecast sees trillions in additional GDP!

Which among the fifteen or so gripper developers will be first out with a smart gripper? A few are already grafting intelligence into their tech.

The gripper-meisters gear up
The names of four of the most prominent and well-respected gripper manufacturers read like a German law firm: Schunk, Schmalz, Zimmer & Weiss. The point here is that in a single, compact slice of German geography there physically resides decades of gripper expertise. Henrik Schunk, CEO of SCHUNK, writes in Grippers in Motion that there once were many other German gripper makers, now defunct or absorbed by others.

That’s a lot of resident engineering talent. In Lauffen, the small-town home headquarters of SCHUNK, probably most every dinner table around is filled with kinematics chat every evening; all of which gives Germany an enormous leg up in the race to the smart gripper.