Technology reaps…and sows, and we need to be ready faster for both!

Work fit only for robots?
Studs Terkel spent forty-five years of his life interviewing working people about their jobs.

The Pulitzer Prize-winning writer asked a lifetime of questions resulting in 9,000 audiotapes for his Studs Terkel Show that aired over radio station WFMT in Chicago. That’s about 200 interviews a year for over four decades. The interviewees ranged from titans like Simone de Beauvoir, Bertrand Russell, and JK Galbraith to simple, ordinary working folk like Hobart Foote of Gary, Indiana.

AI, with a neat algorithm that could parse audiotape, might well tell us lots of interesting things about these people and the patterns of their work lives.  Terkel was his own algorithm, and he put the best of himself into a bunch of books on people, their jobs, how they worked and why.

One of the themes that reoccurs regularly in the interviews is that of people feeling that their jobs were mindless, repetitive, boring, and most certainly a job, as more than a few said, fit only for a robot. Jobs that they prayed their children wouldn’t have to endure to make a living. But thank God for that mindless job, because without it there’d be no bread on the table at home.

In one of his most famous books, Working: People Talk About What They Do All Day and How They Feel About What They Do, Terkel distilled the essence of what he was hearing about jobs from those interviews: “It is about a search, too, for daily meaning as well as daily bread, for recognition as well as cash, for astonishment rather than torpor; in short, for a sort of life rather than a Monday through Friday sort of dying. Perhaps immortality, too, is part of the quest. To be remembered was the wish, spoken and unspoken, of the heroes and heroines of this book.”

Pink slips for old technology
Most of the people that Terkel lovingly and skillfully interviewed are gone, and so too are their mindless jobs. Fortunately, no one has to tell their kids to get a job as a key punch operator or to stand all day at a turret lathe or learn to operate an elevator. Technology has already taken on that task for us.

Technology, as it has since the days of Stephenson’s locomotive, was the grand reaper of all those jobs fit only for a robot. Today, technology is still at it, and always will be still at it, reaping…and also sowing.

These days, however, technology’s innovations and deployments are accelerating, and the reaping and sowing are accelerating right along with them. Ten years from now we’ll look back and think that the acceleration was snail slow, and it’ll be true.

According to Ray Kurzweil in his The Singularity Is Near, technology is an evolutionary process, like biology, only it moves from one invention to the next much faster.

Technology swept away the toil of key punch jobs, replaced them, and then replaced the replacements, and so on.

Technology goes beyond mere tool making, writes Kurzweil; it is a process of creating ever more powerful technology using the tools from the previous round of innovation.

Terkel died in 2008, but if he were around today, his interviews would offer him a ringside seat at the epicenter of the new phenomenon of high-speed workplace disruption. His frequent interviews would readily display the pattern of Kurzweil’s onrush of technology.

Clearly, Terkel would quickly deduce that people need to mirror the acceleration process just to keep up with preparing themselves for the rapid changes ahead, or miss the opportunities resulting from the ever-newer technology. Or worse, suffer the consequences of being too slow in an age of fast-or-else transformation.

Now a decade on since his last interview, fast-or-else transformation has a robot or AI or a combination of both replacing the person; technology is in Kurzweil’s accelerated reaping mode, but also in accelerated sowing mode as well.

Ben Pring, director of Cognizant’s Center for the Future of Work and co-author of What to Do When Machines Do Everything, sees 19 million positions in the U.S. alone that will be automated out of existence. All global industrialized economies will experience similar job losses. That’s the tech reaper at work. As for tech sowing, the Cognizant Center forecasts 21 million new roles, with the majority of existing jobs likely to be enhanced.  “Work will change, but it won’t go away,” says Pring.

The mountain yet to climb
The “staying but changing” part of the new age of transformation is ramping up, as CNN blarred in this headline: U.S. has record 6 million job openings, even as 6.8 million Americans are looking for jobs. Worldwide, more or less the identical job disconnect is being seen ever more frequently: The skill sets on people’s resumes don’t match what’s in the Help Wanted adverts.

That’s the part that concerns Jürgen von Hollen, the president of Universal Robots (UR), the high flying Danish maker of cobots that is experiencing record sales globally. Von Hollen’s cobots pulled in $170 million for 2017, up from $109 million in 2016. For 2018, he says he’s got two goals set for UR: 1. Grow sales revenue at 50 percent or better; and 2. Help to educate a technically skilled workforce that UR desperately needs to properly maintain, manage and generally oversee UR’s worldwide deployments that number in the vicinity of 20,000 cobots.

UR’s cobots could well be the poster child for Kurzweil’s wild world of technological change and Pring’s job creation machine. Cobots are simultaneously reaping and sowing at high speed. It’s on the sowing end of things where von Hollen has his work cut out for him; his thousands of cobots are creating thousands of new jobs that are under threat of going unfilled. He feels the pain of resumes that are barren of skills vital to keeping UR’s cobots happily whirring away in factories on six continents.

He’s far from paralyzed by the mega numbers of unfilled jobs or waiting for reluctant governments to take action to remedy the situation; he’s got UR doing something about it. The company has created a global, online education site called UR Academy where a bold headline across the home page reads in all caps: BECOME A ROBOT PROGRAMMER IN ONLY 87 MINUTES.

Although sincere about online education via the UR Academy, he’s not just making a noble gesture about educating UR and non-UR users alike. He’s a realist, and reaching out online with solid instructional tools may help to fill a piece of the void he sees approaching. The void of selling his machines into markets where the pool of people with robot skills is low or even non-existent could well constrain sales.

The UR Academy site is clean looking and easy to use; it has nine basic, how-to instructional modules (slideshows with audio) available in seven languages (Chinese, English, French, German, Japanese, Korean, and Spanish). The series is well conceived and well produced, and presents an unhurried learning environment where some real learning can take place. Impressive.

With a half-million robot related jobs opening up every year, sites like the UR Academy are sorely needed for training or even just to offer direction for potential education and careers in robotics. Of course, the need far outstrips the UR Academy’s ability to outreach to everyone, but it points the way to the potential of what online robotics education, free to all, could do if entire nations rallied to support similar efforts.

In addition to supplying training for much needed technical talent, places like the UR Academy also assist that most personal and intangible of journeys, what Terkel called the search “for daily meaning as well as daily bread, for recognition as well as cash, for astonishment rather than torpor.”

In the end, the difference maker between technology reaping and sowing is going to be all about people and what they know. Learning is always a good place to start. 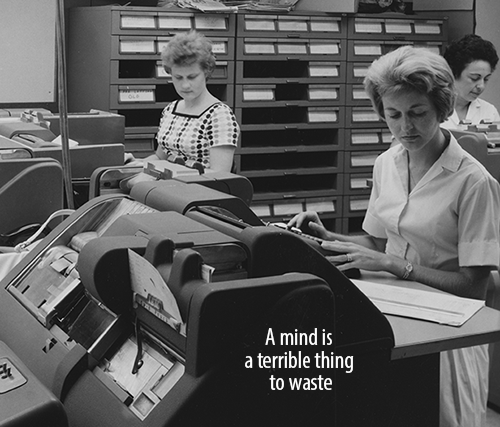