A Place Where Robots Are a Godsend

Where because of robots there is work; and where without them is unthinkable

More robots, please
Believe it or not, there are places on this good Earth where both the citizenry and their leaders are cheering on robots into all manner of factories to take on any and all available work. There’s no anguish, no hand wringing, no torment about a jobless future for humanity.

There are places where robots are a godsend.

And they are not where you’d most expect to find them, like Japan or in Korea with millions of retirees and old-age homes stuffed to the rafters; or in Taiwan with the same aging story, plus Taiwanese youth nipping off permanently to China for jobs. No, the outcry for more robots is much further west, way west. No place on the planet is cheering on robots as is eastern Europe, which could well become a factory automation model for Japan, Korea, Taiwan or everywhere else, for that matter.

The northerly part of eastern Europe, that clutch of countries squashed between Belarus-Ukraine-Romania and Austro-Germany—most notably Hungary, the Czech Republic, Slovakia, and Poland—has a population problem. Immigration is the most prominent one for now. That’s why there are so many Polish construction workers in Paris, Czech auto mechanics in Berlin, and Hungarian machinists in Vienna.

The global Great Recession pushed eastern Europeans west, at first for any kind of gainful employment, and since 2011 with the EU easing work travel, for permanent employment with good pay. None are returning home anytime soon. Much to the chagrin of politicians like French president, Emmanuel Macron, who chaffs at the notion of low-cost eastern Europeans in France taking jobs away from his fellow compatriots.

Back home, where the unemployment rate is tumbling toward zero, the U.N. is also forecasting low fertility for the future of eastern Europe, saying, if low fertility rates persist the combined population of Poland, the Czech Republic, Slovakia and Hungary will fall by more than eight million, dropping to a total of 56 million people by 2050.

Lessons aplenty for everyone
Emigration, near-zero unemployment, and a low fertility rate, plus the aforementioned old folks…plus a need for a marked increase in productivity because of a booming workload, all make for the perfect scenario for automation in eastern Europe to march into factories under a banner of overwhelming approval from every human in sight.

A total rarity most anywhere else, but maybe the prelude to a bigger trend.

Robot salesmen, their order books filling up fast, must be pinching themselves over their good fortune at selling into eastern Europe. Especially full are the order books of Mitsubishi Electric, Yamaha, Universal Robots, KUKA, and Omron.

Yamaha, as reported by Reuters, said its “industrial robot sales to Hungary rose by 150 percent last year from a year earlier and by 120 to 130 percent in the wider eastern European region; while Omron, reporting on its income, says “east European orders rose by 55 percent year-on-year, driven in part by the labor shortage but also by the need to improve productivity and production quality” Future expectations for growth in robot sales are pegged at 30 percent per year.

Omron, in a strategic move aimed at offering training and general PoC (Proof of Concept) for its customers, will soon open a robot laboratory in Katowice (Poland).

Mitsubishi Electric’s Niels Meinke says he expects “further growth of about 110 to 130 percent for the robotics market in the eastern European region until at least the end of its next fiscal year, March 31, 2019.”

Of the more than 300,000 industrial robots shipped worldwide in 2017, the International Federation of Robotics (IFR) estimates that 9,900 robots were installed in central and eastern Europe—a fraction of global shipments, but nonetheless, a significant regional increase of 28 percent from the year earlier.

Dodging a bullet
To other parts of the world which are also undergoing transformation, the look and feel of the automation zone that is eastern Europe isn’t totally alien. The shadows and undertones from eastern Europe are on the creep seemingly everywhere.

The striking part is that without robots to do the work, there might not be any work at all. Factories might leave along with their tax revenues and all the other direct and indirect goodies that industry provides. A way of life would be threatened for millions.

Because of robots such an unthinkably stark reality has been avoided.

It’s in places like Hirtenberger Automotive Safety where the rubber of reality hits the road. Located in western Hungary in the town of Papa, which is a two-hour drive from Vienna, the company is booming with work making safety products for the likes of BMW, Mercedes, Volkswagen and Audi. 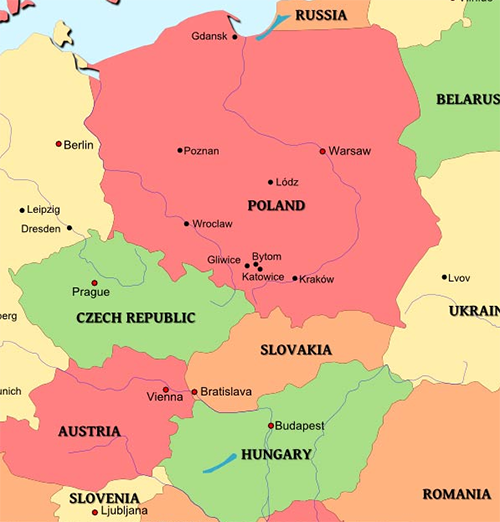 Gabor Kiraly, the Hirtenberger manager, has over 700 employees working at the plant, but a combination of high turnover and an inability to find replacement workers has made a swift change over to robot-driven automation his only alternative.

“The current Hungarian labor market does not allow us to grow,” says Kiraly. “Similarly to many other Hungarian companies we cannot get the extra workforce from the market. We have decided to supply the growing volumes and new products with automated solutions.”

Hirtenberger invested $3 million for automating two production lines. Automation replaced fourteen workers….who were not terminated but rather moved to other jobs at the plant.

Kiraly’s plight is the same or similar to most every plant manager throughout Papa, Hungary and all of eastern Europe.

“Economists warn the labor shortage could have a crippling effect on some of eastern Europe’s economies before the end of this decade.” Of course, worker scarcity is not as acute in the west, however, Germany, the Netherlands, France and Britain are also feeling the pinch of worker shortages that are inexorably getting worse.

Where do people fit?
Of course, there is concern throughout eastern Europe for the plight of people. Although robots are today a godsend for addressing the needs of manufacturing, already there is a growing need for and shortage of people to maintain all the robots going to work in the factories. The jobs of tomorrow promised by automation are arriving, but there are not enough people to take them on.

Robert Dekan, controls manager for the Automated Technology  Group(Slovakia) , is both worried and excited about the future that is hurrying near.

He sees cobots as more of a dominant force in the future of automation, but only if the prices begin to tumble downwards. He thinks that magic number is $10k. After that, he says: “It is just question of 1 to 3 years to have 50 percent of actual manual production automatized with cobots.”

And, indeed, prices are coming down from top-level cobots like Universal Robots’ $35k machine to $15k offered by AUBO Robotics; and as seen with AUBO, the cobots can be ordered via Alibaba. Dekan rightly sees the end results of lower cobot prices.  “I suppose at that level it is not anymore about service level support, you just exchange the whole robot in 30 minutes, and you’re ready to go again, which will be good enough to have a robot able to run two shifts for one year.” He’s already making the connection of cobots as a commodity item; and if readily available through e-commerce—like Alibaba or Amazon—that cobot commodity item will be a major disruptor.

“I believe,” he goes on, “we are very close to a ‘5th’ industrial revolution—when people will be massively replaced.”

And that’s the part that worries him:  “Lets start serious discussion about our future goals as humanity. We have plenty of time then. We are smart enough to use this time for our good.” He then trails off exclaiming: “Exciting times!”