Storm & Stress in the Workplace as AI Draws Near

The future of work arrives: AI, robots and automation

“You don't need a weatherman to know which way the wind blows.” —Bob Dylan

The working all work somewhere, and now all of those somewheres are suddenly changing and the working are beginning to fret…with good reason.

With Dylan in mind, “You don’t have to be a weatherman…” to sense the storm clouds of AI, robots and automation rolling into workplaces everywhere. It’s a never-seen-before kind of storm with a brand of disruption that goes to the very core of what it means to work at anything.

Garry Mathiason is out with a new article that characterizes the stormy nature of what’s rolling in as “two of the most powerful forces reinventing and redefining business, the workplace, and work itself.”

That’s a potent statement, and a frequent theme from this longtimeLittler attorney, litigator, and employment law strategist. Garry is also the founder of the firm’s Robotics, AI and Automation Industry Group, which he now co-chairs with another Littler lawyer, Natalie Pierce.

Years of practice have made Garry more than intimate with what goes on in the workplace. In short, he’s seen it all.

Clearly, in his latest offering, Garry is honing in on the raw nerve of uncertainty for employee and employer alike as the transformational role of artificial intelligence (AI) plays itself out in workplaces around the world. Garry has a keen eye for seeing and analyzing the difficulties and a deft and lucid way of suggesting remedies.

This time around, Garry has taken the time to put it down on paper, which his publisher describes as an article that “discusses the role of artificial intelligence in human resources decision-making and the dark side of the use of algorithms in making critical decisions.”

His title is filled with portent: “AI’s Transformational Role in Making HR More Objective While Overcoming the Challenge of Illegal Algorithm Biases”

“The automation of the last century,” explains Garry, “is rapidly being augmented and replaced by intelligent self-learning machines and systems driven by cloud computing, breakthroughs in sensor technology, and creation of new algorithms that harness the power of “Big Data.”

He cautions care be taken every step of the way, especially in view of the torrent of new technologies roaring into recruiting and hiring practices; potential discrimination in hiring, promotions, and terminations; pay equity issues; missteps in compliance and in other critical HR functions.

Timing is important here. “Predictive analytics and ‘big data’ already have been embraced by businesses worldwide as essential for survival,” he writes. “Yet only now is artificial intelligence being aggressively introduced to HR departments and the hiring, compensation, and termination of employees, as well as the recruiting and retention of freelancers as part of the ‘gig’ economy.”

Deloitte’s 2017 Global Human Capital Trends survey of more than 10,000 business and HR leaders from 140 countries reinforces Garry’s workplace observations and analysis. Deloitte concludes: “This year [2017], 41 percent of companies reported they have fully implemented or have made significant progress in adopting cognitive and AI technologies within their workforce.” That’s way up from Deloitte’s 2014 survey that showed only a 14 percent implementation.

Deloitte’s assessment of the upswing: “It is abundantly clear that technology is advancing at an unprecedented rate. Technologies such as artificial intelligence (AI), mobile platforms, sensors, and social collaboration systems have revolutionized the way we live, work, and communicate—and the pace is only accelerating.”

Exactly Garry’s own take on the situation.

His initial thoughts call for a closer coupling of employer and its HR department, stressing “the vital importance of every employer reviewing how its personnel decisions are made, especially the use of predictive analytics and big HR data in compensation decision-making. This should include checking for possible unintentional biases coded into the algorithms.”

That’s a tall order for any employer and HR department to take on, and there seems to be no ready alternative or short cut to ease the pain. For infractions, there’s a gauntlet of potential litigation awaiting a false step, even innocent ones.

All of which is probably the reason why Garry’s Robotics, AI and Automation Industry Group has been growing so rapidly. A potential source needing counsel can readily be seen in Deloitte’s reported three-year jump from 14 percent to 41 percent of companies that “have fully implemented or have made significant progress in adopting cognitive and AI technologies within their workforce.” That covers thousands of companies and hundreds of thousands of employees.

Check out Garry’s piece for yourself; it’s a well-written, eye-opening look at AI in the workplace as storm clouds of uncertainty quicken and gather over the world of work.

In the current issue of The Journal of Robotics, Artificial Intelligence & Law, March–April 2018 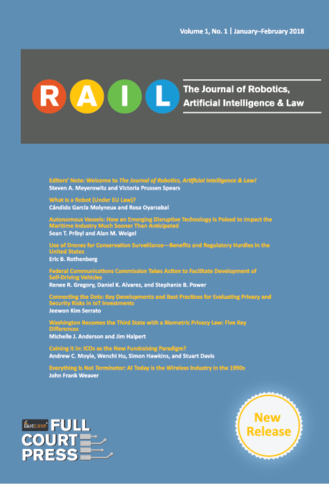