Why Is My Factory Smarter Than Your Factory?

Upping the robot ante: When preventive maintenance and non-stop work are not enough

—Capgemini: Smart Factories: How can manufacturers realize the potential of digital industrial revolution?

Reaching for 2025: The rise of “intelligent manufacturing”
Factory Owner One smiles contentedly looking out over his hundreds of industrial robots and cobots— all humming away tirelessly and efficiently at their jobs; he’s also pleased that his worker payroll has been reduced from 250 to 75. Life is good. In his small corner of the manufacturing world the promise of automation has been realized.

And if his new robot workforce is equipped with predictive maintenance, he feels relatively safe behind his data shield of early warning, where smart data analytics offer data-driven approaches for condition monitoring of his machines.

However, as Mariya Yao points out in her piece, Factories Of The Future Need AI To Survive And Compete, all of that automation is still far adrift from “manufacturing” anything.

Seems predictive maintenance for early detection of anomalies for production machines is good but way not enough. It’s like monitoring the health of a human worker via job performance. Nice, but there should be so much more.

And of those 75 remaining workers, Factory Owner One still has a workforce problem: “Manufacturers are also strapped for qualified labor, both skilled and unskilled, as older employees retire, younger generations lose interest in manufacturing jobs, and immigration policies tighten.”

Being minutely aware of the manufacturing process, from raw materials to fabrication, to QCing, to integrations with other robots and machines, to logistics and transportation, to back office operations, will be essential aspects of their workdays and nights.

The instruments that robots will use to complete their many job functions are arriving and will continue to arrive, so much so that a robot that is non-instrumented will obviously not be of much use.

Lofty goals for a five-year run, and smart robots are key to those forecasts.

Lagging quite a bit behind (see chart) are the efforts from India and China. China in particular, because of its massive, multi-billions of dollars spent on its ongoing automation build out, to the tune of 10,000 robot purchases per month.

Playing the AI card
Andrew Ng, former AI guru at both Google and Baidu, sees the factory as an ideal romper room for artificial intelligence (AI). He’s interested in manufacturing “because it touches so much of our everyday lives…as a way to bring digital transformation to the physical world.”

“There are all these decisions that AI, machine learning, can make in a much more systematic way,” he says. 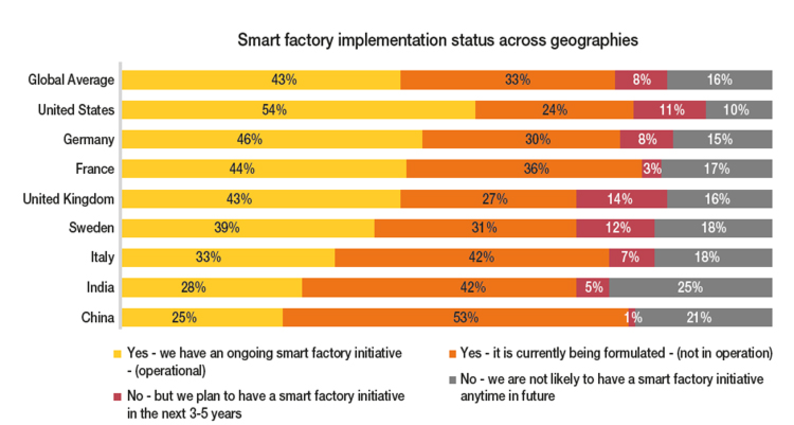 “Rarely twice…always once”
Then there’s Christian Otto, who’s not a factory owner, roboticist or AI commentator, but an automation technician who drives his van around Hamburg, Germany fixing automation breakdowns for Jungheinrich. He makes a telling observation about factory automation: “With automated systems,” says Otto, “the same problem rarely happens twice. There are always new and different problems that occur just once.”

Robot-driven automation is new, the Industrial Internet of Things (IIoT) is newer, both are untested over time, and inevitably both will encounter unexpected stoppages. That’s how new things are. As robot-driven automation further expands into manufacturing, expect Christian Otto to continue being a very busy guy.

“Rarely twice…always once” is a huge problem for Factory Owner One who has little idea when and where in his factory that “once” is going to happen.

Sure, Factory Owner One is a responsible manufacturer, so he conducts standard maintenance on the machines that provide him his livelihood. But that’s it, and it was so much easier when he had more staff. Now, a sea of automation stretches out everywhere in his factory—everything is a machine—and he can’t run staff meetings with robots to troubleshoot and head off potential problems.

Unfortunately, robots aren’t as smart as the humans they replaced.

Other than a quick, anxious call to someone like Jungheinrich’s Otto, there’s little recourse.

Instrumented robots
Factory Owner Two has just as large a sea of automation as Factory Owner One, but is leveraging digitalization for advanced planning and scheduling by using real-time production and inventory data.

In short, Factory Owner Two is building a smarter factory, and he’s not alone. The chart, Smart factory implementation status across geographies (Capgemini), shows those geographies which are leading the charge with ongoing or “operational” initiatives.

Throughout this journey to smart factories, robots are going to be asked to do more and more…ever more often! A smart factory cannot be smart without them. And that certainly means going well beyond keeping tabs just on a robot’s physical condition. ​​

The impacts of industrial robots operating under the direction of AI could well be profound…and highly lucrative. For example:

Ng’s new AI company, Landing.ai, is built around the prospect of LandingLens, an AI visual inspection platform for the transformation of manufacturing. As Ng explains it: “We have developed solutions around visual inspection, controlling and automating, calibration and tuning, and automated issue identification.”

Factories can be smart—and need to be smart!— especially if short-window (five years), super-rich forecasts as is the Capgemini’s “$500 billion to $1.5 trillion in value added” can be attained.

Volkhard Bregulla, a Hewlett Packard vice president of global manufacturing, sees a flexible manufacturing future where AI and robotics, “in tandem with complementary technologies like 3D printing and IoT, will enable the modular manufacturing required to meet rising consumer needs.”

One thing is for sure, most of the robot-driven automation getting deployed today will need to smarten up in a hurry.

Upping the Ante: Robots Getting Smarter All the Time