Can small, indigenous startups like Bharati Robotics get in on the action?

Investors are back again at the trough of Indian technology startups to the tune of $10 billion (an all-time high through to October 31), with two months of potential yet to go.

Two years ago investors looked in the mirror at Indian tech startups and saw China, which it wasn’t, and hyperfunded any moving target (2014-2015). They got burned big time, so they went on hiatus until now. Some like Tiger Global Management and DST Global are still waiting things out.

The basic reason for the renewed confidence: “That trend reflects the greater maturity of the Indian industry. Leading companies in many sectors are now firmly established, providing more obvious bets for investors.”

The economy also helps: India is the globe’s fastest growing GDP, experiencing a nice liftoff in 2016. 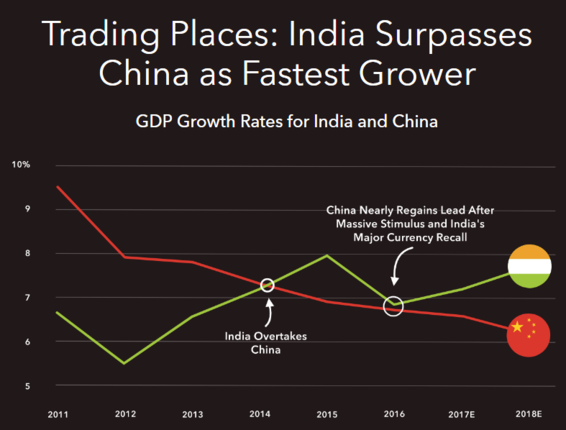 Prashant Mehra, partner at accountancy and advisory firm Grant Thornton India told Forbes: “There have been several reforms in India, including the new taxation laws, reduced inflation, and a continued focus on investment growth. And that is making India attractive to investors.” 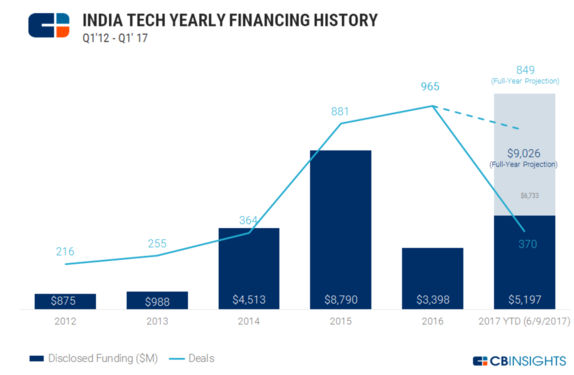 The big boys are also back. For example, China’s Midea Group will invest $123 million to build a factory in Pune for its household goods (operational in 2018). Midea’s new factory will have capacity for 500,000 refrigerators annually, 600,000 washing machines, and one million water heaters and other appliances. In a partnership with U.S.-based Carrier, Midea has been building air conditioners since 2012, and now will invest $76 million for general improvements and increased capacity for the Carrier Midea partnership.

To succeed, however, Indian high-tech doesn’t necessarily need foreign financing or a foreign corporate big brother. Bharati Robotics for one has kept things local both in funding and business assistance and has grown since its founding in 2015. 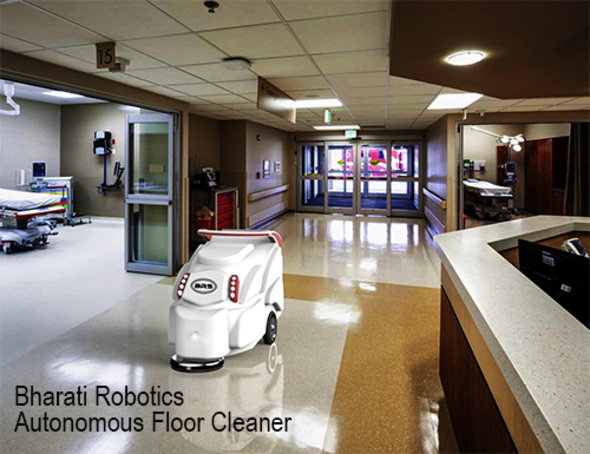 The money, according to the startup’s founder and CEO Debashis Das, will go to expanding capacity and technology improvements.

Das is more than willing to go global with his cleaning robots; there’s a $150 billion market worldwide for cleaning and hygiene, and he’s eager to show that his machines are world-class at getting the job done. Of course, going global would require a much larger funding opportunity than he now enjoys.

He’d also have to contend with larger, international competitors like Sealed Air, Karcher, IPC, and Nilfisk.

With investor money reflowing in sizeable chunks into India’s startup community once again, Bharati Robotics may well get its chance to go global. It would surely like to emulate Gurgaon-based GreyOrange Robotics that nabbed $30 million in a Series-B round led by Tiger Global Management and Blume Ventures (2015), and two years on is a global force with its logistics robots.

In a recent interview with India’s INC42.com, Das, who’s company slogan is “Creating Robots For People”, said that it’s his belief that “adoption of robotics will not only increase efficiency across processes in industries but will be restructuring the markets and sectors, and will eventually make the economy more robust creating more quality and well-paying jobs.”
When “Make in India meets “Clean India”
Although Das says he’d relish meeting up with investor groups for a chance at pulling off his own GreyOrange catapult into the world of global cleaning or logistics, there seems to be opportunity aplenty for in-country work for his robots.

In 2014, when India’s Prime Minister Narendra Modi kicked off the nation’s Make in India program, he simultaneously announced his Swachh Bharat Abhiyan, or Clean India Mission, saying “Don’t we all of have a duty to clean the country?”

In a continent-size country of a billion-plus people, Bharati’s cleaning robots could well have more than enough work with which to grow prosperous.

According to Indian activist Bindeshwar Pathak in a recent article “Can India be Cleaned?”, lack of sanitation and cleanliness costs India 6 percent of its annual GDP, which is a massive price to pay for poor public health conditions.

Of course, Das isn’t alone with indigenous cleaning robots; Benaka Engineering, Roots Multiclean, and Alano Motors are his homegrown competition. Although Bharati says it has clear advantages over the other three, India has more than enough cleaning chores on hand to occupy all four companies 24×7 just about forever.

The cool thing from the dual perspective of India’s “Make in India and “Clean India”  is that here are robots made in India ready and willing to serve India’s clean-up ambitions.

Although startups like Bharati are worthwhile targets for VC money, with a little financial oomph from the Modi government, the indigenous cleaning biz in India could have its own homegrown robot cleaners.