After 12 Years, AIBO’s Out of SONY’s Doghouse!

What next? Is it too late to recapture the magic that made this robot dog loved by so many?

THE BURNING QUESTION: Would millennials buy AIBO? In an age of humanoid practicality, is there a place
for a famously impractical canine robot?

Why AIBO and why now?
If SONY wants to remain a strong player in global living rooms, it had better start thinking home robots again and soon, because everyone else is and everyone else seems to be doing something about it. From 1999-2006 SONY had in AIBO, its RoboDog, arguably one of the best home robots ever produced.

The word AIBO is an acronym for “Artificial Intelligence roBOt” and is also the Japanese word for “pal” or “companion”.

Back in 2006, the then-SONY CEO Howard Stringer stopped production of the slick-looking, talented AIBO, which an adoring customer base had purchased to the tune of 150,000 units, some at $1,500 a pop (that’s over $1,800 today with inflation). 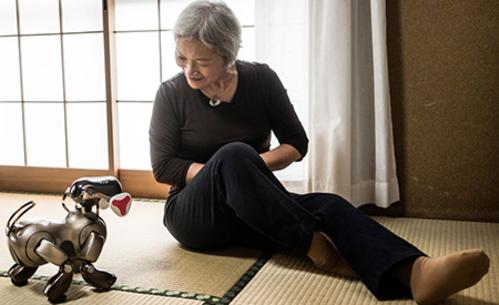 Michiko Sakurai and her husband own six. A total devotee, she says, looking lovingly at her RoboDogs: “The Japanese believe that every object has a soul.” She says she now worries about getting parts for her AIBOs to keep them alive.

Jurgen, a German, offers up the ultimate Teutonic endorsement of his Japanese-made AIBO: “Best thing in hardware reliability, even better than my car.”

Wow, love and trust for a product echoing out of living rooms from differing cultures thousands of miles apart should be music to any manufacturer’s ears.

Seems it wasn’t enough for SONY.

The AIBO pink slip delivered by SONY spokeswoman Kirstie Pfeifer: “AIBO has been a very popular product, but we’ve decided to focus on our core businesses of electronics, games and entertainment, and on profitability and strategic growth.”

The time lag bears repeating: That was twelve years ago! In dog years that’s 84!

All Amazon has to do is scoop up one or maybe two existing home robots via acquisition, breathe them full of Alexa-esque capabilities—including the ability to order goodies online from PetCo—and it could be game over in the living room for SONY…and maybe even for its PlayStation. Ouch!

SONY is well aware of Amazon’s robot division and its Kiva robots and, like everyone else, must have gulped when Amazon went retail in its purchase of Whole Foods. SONY must realize that disruption can come in a Jeff Bezos heartbeat, especially if you dally with robotics invention, innovation, and timing. All three of which it turned its back on in 2006.

Kazuo “Kaz” Hirai, SONY’s current CEO, had suggested back in 2016 that the company may develop industrial robots for factory automation, but has abandoned those efforts because the established competition is too strong.

“SONY feels there is a better chance for success in the home-use robot sector since it is still at a nascent stage.” Seriously? Things aren’t that “nascent” any longer.

Has SONY lost its robot mojo?
SONY once had a big-time robot mojo going for itself.

Hardware and software engineering, design, and marketing all came together when these four friends and colleagues got together to birth the soon-to-be-famous RoboDog. AIBO was an instant hit through six design iterations over its seven-year lifespan. AIBO’s cool looks even got it enshrined in New York’s Museum of Modern Art (MOMA), right up there with Duchamp’s bicycle wheel and the Cisitalia 202 GT.

That was major mojo! That’s what’s missing from SONY today, and maybe as well, the reason for Japan’s lackluster performance at birthing personal robots in general. A quick glance across the Sea of Japan sees dozens of Chinese hopefuls vying for living-room glory. Seems China is pumping up its own mojo.

The return
That SONY should be part of our robot future is without question; its robot pedigree had, emphasis on “had”, few equals back in the day (circa 1999-2006).

Or, if SONY is finally waking up to Prime Minister Abe’s call for a national Robot Revolution (from back in 2015), then two years spent thinking about a course of action and the best way to contribute to the country’s future is admirable.

Hey, better late than never. An excuse, lame as it sounds, might be made for Hirai righting the ship into healthy profitability again.

But, is SONY’s return to robotics and its coming to the aid of the homeland best realized with the exhumation of its long-dead (2006), canine RoboDog AIBO?

The answer to that question is now in the very able hands of Hiroaki Kitano, president and CEO of SONY Computer Science Laboratories (CSL), the same place where the four samurai, Idei, Doi, Fujita, and Soroyama, created their winning bot. 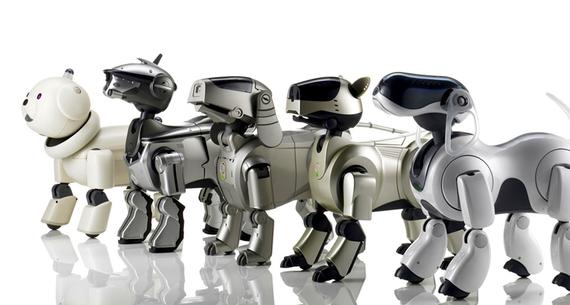 In an interview, Kitano, the leader of SONY’s ambitions in the fields of robotics and artificial intelligence, says he wants SONY to rethink what it does and how it does it…the time has come for the company to redefine what makes SONY “SONY.”

“I initially became involved last autumn [2015],” says Kitano. Toshimoto Mitomo, the executive in charge of mid- to long-term business development, came to SONY CSL to ask for our cooperation. He said he was looking to promote a range of new business domains to drive SONY’s longer-term development. AI and robots were a part of that, and I said the work should begin immediately.”

Part of the Kitano interview honed in on reviving AIBO: “There’s no point in doing the same thing we did before,” said Kitano. “At the time AIBO came out, there was no wireless broadband, and central processing units were way too powerless. There also was no cloud (computing). Mechanically, actuators and sensors have changed, too, and sophisticated algorithms such as deep learning were not there yet. If we make a home-use robot based on current technologies, it will be different from what we made back then.”

Kitano may well be onto something there. The obvious trend today in personal/home robots is upright and not on all fours like AIBO. Just look around and count the ones with a humanoid-type orientation, ones that are mobile by two legs or two to three wheels, and the trend comes more into focus.

The logic behind upright orientation seems commonsense enough. Better utility from sensors, especially vision, is one; having a neck for a quick turn or wheels on which to swivel enables a faster, wider field of view. Upright is better when interacting with humans, who are also upright.

Interestingly, Kitano went back to SONY’s original charter, written by co-founder Masaru Iuka for a little inspiration. There he alighted upon the words “free spirit and nonconformity,” which are said to embody the company’s founding spirit. He used those words in a presentation to Hirai for the making of a new SONY, a “SONY 2.0”.

In August of 2016 when asked directly about an AIBO redux, here’s what he had to say: “AIBO was simply cute. Amazon.com’s Echo robot isn’t all that cute, but it is useful. Echo is powerful, as it enables users to easily place orders with Amazon and activate other Amazon services. We want our robots to be cute and amusing, but they won’t gain wide acceptance unless users also find them useful and are glad to have them.”

Even an AIBO 2.0 would need lots of utility crammed into it to pass the “practicality” muster that most millennials feel is obligatory.

Millennial living rooms by the tens of millions worldwide are more than ready for robots. What then has SONY 2.0 got in store for them? Ask yourself: AIBO?