"There is a real need to transform the countryside"

“There are plans to modernize the agricultural sector by 2035, and fully transform the countryside by 2050."

Jack in the greenhouse
When Alibaba’s founder and recently near-invisible Jack Ma shows up in a lab coat touring European greenhouses, and Pinduoduo’s chairman Colin Huang does a deep dive into food science, it’s a good tipoff that China is beginning to turn its great eye of financial attention to supporting the country’s agriculture. As well as it should. China’s food supply is in great need of attention, to put it mildly.

Soon after Ma’s greenhouse junket, Alibaba announced its intention to invest a total of $15 billion by 2025 in, you guessed it, promoting the construction of agricultural industrialization in China.

Ex-VC Lillian Li (formerly with Eight Roads Ventures and Salesforce Ventures) is out with an article (here partly excerpted; see full piece) aptly titled: Agriculture tech is going to be big in China.

Obviously, something needs to be done, and done quickly. “It’s time for agriculture to embrace technology,” she says.

Asian Robotics Review has been closely following China’s agricultural needs for some time now; see below four of the most recent.

What If China Automated Its Cut-Flower Industry?
Cut-flower cultivation the size of New Jersey—with zero automation—is now worth $11 billion. An automated future could treble its value

Steel-Collar Farmhands: Robots in Fields & Orchards
Accelerating innovation and speed to market via partnerships powered by investments from industry titans John Deere, Kubota, and Yamaha. Is it the new normal for field robotics?

“The market and opportunity in China for the agricultural sector is enormous,” writes Li, “including not only agricultural industries but also forestry, animal husbandry, and fisheries. The agricultural market is big and growing at $2.1 trillion in 2021 and is growing at 3 percent annually. It also employs ~25 percent of the population. An expert estimated China’s digital agricultural economy to be about $94 billion and expected to double to more than $188 billion by 2025.”

China’s current 14th Five-Year Plan (2021-2025) is teeing up agriculture for big strides, beginning with those regions most ready for it: “Regions with better conditions will take the lead in basically realizing agricultural and rural modernization.” If accurate, it looks like investments would head towards Shandong, Henan, Jiangsu, Liaoning, and Zhejiang provinces. Places where U.S.-based John Deere has had a presence since first eyeing China’s ag needs with its initial foray into China in 1976. Deere has manufactured equipment in China ever since its first plant there in 1997.  It’s only grown bigger since.

A lot needs to be done

The shortcomings that need to be overcome are formidable:

Li writes: “Agriculture is not a magnet for talent. People usually work to escape farming and not return. In China, compounding factors of economics, prestige, and culture have seen a brain drain from rural regions to cities.” 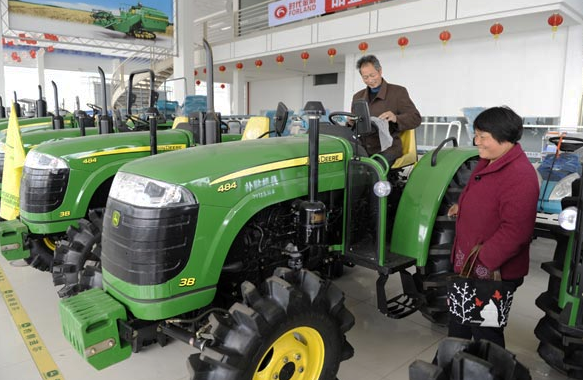 It’s easy to see from the above why China needs the likes of Jack Ma getting into the solutions process for the future of farms. JD.com, the nation’s largest retailer, is bringing its digital technology to rural China, and its tech is making a positive difference for both farmers and rural poverty. But, as Li points out: “JD has their farm projects at least 50 percent funded by government subsidies.

That JD.com’s tech can make such a positive difference is not lost on China’s brain trust. “Inflection points can be reached in a few ways,” Li points out. “It requires young talent infusion in the sector, large landholding structures, technology needs to mature and government-based mass investment into the space.”

“Many startups are still in small scale pilot mode, with academic frameworks that propose new types of farming initiatives. A common theme with agriculture tech is that hardware installation will prove to be a key driver of data collection, which will require access to finance and personnel to deploy properly.”

The most prominent needs on the to-do list: Sowing seed, fertilizer, de-weeding, pest control, and harvesting vegetables and fruit.

In both the U.S. and the EU, robotics for sowing, fertilizing, and de-weeding are well established and robust. Government subsidies and training would be a logical next step for to acquire the tech. Harvesting certain vegetables is a can-do, while some other vegetables still need some tech attention; fruit, although promising, is still elusive.

For example, China is the world’s largest apple producer (48 million tons), which means billions of apples need to be picked by hand. With a labor shortage of any kind, getting the apple harvest in apple by apple, one at a time, may well become a more tedious than necessary chore.

Although Li posts a chart in her article showing some two dozen startups involved with various aspects of agricultural production, she says: “The reality with agriculture is that it is still nature. It will take time to see results.”

With the likes of Jack Ma prowling greenhouses, with other tech mega-stars similarly getting involved in agriculture, and the government ready to finance much of it, a true inflection point may well be arriving sooner than later.