Can robot weeders save 200 million metric tons of grain from weed devastation?
A young industry with a massive upside coming of age.

More than just a nasty nuisance
Annually, on a global basis, weeds destroy 200 million metric tons of grain. That’s the combined capacity of over 6000 bulk cargo ships each carrying 60,000 metric tons, which is about 20 percent of the world’s total output of 2.1 billion metric tons. In the U.S, alone, yield losses are $33 billion in lost crop production.

According to the Food and Agriculture Organization (FAO) of the United Nations undeveloped countries are harder hit at 30 percent in yield losses.

Vegetables and fruit berries suffer as well from billions of dollars of lost yield from weed infestations. Additionally, weeds are home to insects and disease organisms that attack vegetables and other crops.

So, between the excitement of planting season and glories of harvest time, there is a vast chunk of watering, sunshine and growing that is constantly assailed by weeds that just as constantly needs vigilance and attention.

Clearing an acre of weeds, says the FAO, costs about $300. Multiply that times millions of acres, and you’ve got a massive expense that’s most often performed by human labor, herbicides, or both…and recently by the likes of flame throwers and genetically modified plants.

Farm labor, as we all know, is getting very scarce; and herbicides enable weeds to evolve into Monsanto-loving, herbicide-resistant strains. Think, billion-dollar lawsuits, lymphoma, and the terror of glyphosate. There are “255 different weed species [that] have already developed resistance in 92 crops in 70 countries. Yet, no major new herbicide mode of action has been introduced to the marketplace for almost 20 years.” Hence, robot weed warriors could be quite welcome.

Drones are nice to have as spotters and data producers, but not ready for prime time as robot weeders.  For $1300, a farmer can buy an ARRIS Agricultural Spraying Drone that totes 22kg (5.7 gallons) of herbicide, but fully loaded it can only fly for five minutes. The average wheat farm is over 400 acres, which is a lot of five-minute flights. Farming, by and large, still needs someone or something to get dirty fingernails killing weeds.

Without constant husbandry, weeds will kill off 100 percent of most any crop.

Fortunately, the last five years or so have witnessed the rise of a new industry developing a new category of robot: autonomous robot weeders.

Weed warriors
Enter the young industry of robot weeders. Technavio says that by 2022, it’ll be an $80 million industry, which is a fraction of the $305 million John Deere paid for robot weed-killing tech from Blue River Technology in 2017. One estimate in Successful Farming places the fledgling industry at $400 million by 2025.

Given the billions in crop losses due to weeds, it would seem natural that robot weeders would be hot items in agriculture. Strangely, until very recently, they were not. Only marginally popular, that is, until John Deere acquired Blue River Technology (Sunnyvale, CA). The gorilla is now in the room, which has upped the visibility of anyone engaged in making automated robot weeders…or, for that matter, most any agribot (agricultural robot). When Deere takes an interest, the ag world usually follows suit.

Deere, the Moline-based powerhouse, can get most anything in agriculture to move at high speed when it throws its influence behind it, and robot weeders seem next on its list.

Weed killing meets autonomous driving
It’s one thing to kill a weed, but the robot weeder first needs to travel to where the weeds are and then to spot them. If it can autonomously drive to and seek out weeds, autonomously dispatch them, and then continue on repeating that action all day, then that’s a highly beneficial and valuable agricultural tool.

Blue River’s robot weeder isn’t fully autonomous; it’s pulled along by a farm tractor (see video). It’s weeding process the company calls:  “See & Spray”. Using computer vision and artificial intelligence, the robot weeder spots weeds as it is pulled along through rows of crops, differentiating between what’s a weed and what’s a plant—and then zaps the weed with a micro-jet of herbicide. Once sprayed, the robot weeder moves along repeating the process as it goes.

Blue River claims that it uses 90 percent less herbicide. Since herbicide costs are approximately $70 per acre (2018), our theoretical farm of 400 acres would cost $28,000 to treat. And that’s just one application. Some crops get 7 to 8 treatments (from pre-planting to just before harvest). Therefore, a saving of 90 percent for a single treatment is quite substantial.

That the Blue River robot weeder weeds on its own, offers yet another resource: eliminating labor. Except for the tractor driver, labor overhead is reduced because tough-to-recruit farmhands aren’t needed. Blue River claims that its weeder replaces 8 to 10 farmhands.

Blue River not alone
Since 2014, a few other robot weeders have either been in development and getting close to going commercial or they’re recent marketplace entrants.

Different than Blue River’s machine is the AVO from Swiss-based ecoRobotix. The four-wheel drive robot weeder, operating entirely autonomously and powered by solar power (with rechargeable batteries), performs “autonomous weeding [utilizing] machine learning.” As the robot detects the weeds, two robotic arms reach down and then target each individual weed with a micro-dose of herbicide.

San Francisco-based startup FarmWise is another newbie with a robot weeder.  Founded in 2016, FarmWise has been co-developing a dozen prototypes with Detroit auto builder Roush Enterprises since 2019. Trials are presently running on lettuce and cauliflower farms.

FarmWise’s robots use “a perception system powered by deep learning to capture and analyze plant images in real-time. Once the images are processed, the AI-powered machines know where the weeds are and mechanically act on each plant (cut the roots), all without “using a single drop of herbicide.” Resistance to herbicides then never becomes an issue.

“To date, [FarmWise] claims that its robot has removed weeds from 10 million plants and that each robot is capable of weeding crops to feed a medium-sized city of roughly 400,000 people.”

Another interesting robot weeder is RIPPA (an acronym for Robot for Intelligent Perception and Precision Application) from the University of Sydney’s Faculty of Engineering and Information Technologies, Australian Centre for Field Robotics (ACFR). It’s been an ever-evolving prototype since 2015, and if it ever gets commercialized, it should be a powerful addition to agricultural robotics. 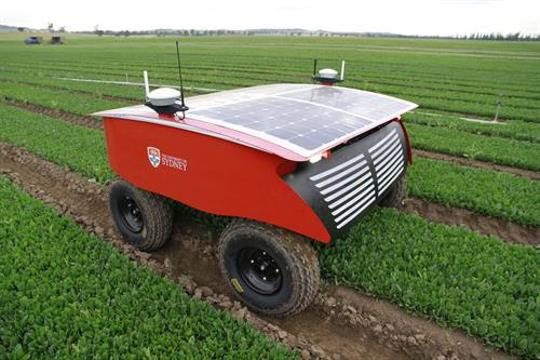 It’s loaded with cool tech like 3D structural sensing, thermal imagery, hyper- and multi-spectral imaging, GPS/INS, and LIDAR. Solar powered, RIPPA can operate non-stop 24/7. A high-speed camera and remote sensing allow automatic weed removal as well as pesticide dispersion. RIPPA can be used for the autonomous spot spraying of weeds at a top speed of up to 4mph. Maybe, just maybe it’ll get to a showroom in the next year or two.

Oz makes weeding fun again; all you have to do is watch it work. Oz works single rows of crops; it’s big brother Dino (see video) is a multi-row worker meant for large farms, like 900 acres of organic celery, broccoli, and romaine lettuce at Betteravia Farms, in Santa Maria, CA. Dino’s weeding tools (like Oz and TED) are camera-guided. TED does the same for vineyards.

Basic Naïo  tech: “The vision system detects crop rows and adjusts the weeding tools (spiked and star-toothed harrows) to allow for high-precision hoeing and weeding.” The all-electric weeder is fully autonomous, and can also be used in follow or manual modes.

Dylan Bognuda, a production engineer at Betteravia Farms, says “weeding [pre-Dino] costs almost $1000 per acre on Betteravia’s 900 organic acres. Having a smaller crew around to supervise an automatic machine could bring that price down to $200 an acre, he says.”

Every dead weed counts
A quick look at the amount of arable land on planet Earth shows why we can’t share any of it with weeds. First off, arable land is being diminished yearly. “Research has calculated that nearly 33 percent of the world’s adequate or high-quality food-producing land has been lost at a rate that far outstrips the pace of natural processes to replace it. Earth has lost a third of its arable land in the past 40 years.”

The need for autonomous robot weeding, with or without herbicides, is obvious, and large ag companies are beginning to notice. The upside for the machines is potentially massive, and could easily best the $80 million forecast for 2022.