Part Two of a Two-part Article

Thailand’s Massive Reach for the Future

The Corridor: 5,000 square miles where robots and automation systems will rule a digital landscape

One map says it all!
If you are looking to sell robots, cobots, robot/cobot parts & services, or automation gear for manufacturing and/or logistics, either this year, next year, or over the next ten years, a single map of Southeast Asia instantly suggests your best chances for success, maybe even for a breakout bonanza.

If you are looking for a virgin customer base of tens of thousands of SMEs where 85 percent still labor along in manual misery, yet 1 in 3 long to automate in some way but don’t know how, then here’s a map showing where to find them.

If you are looking to buy land or factories or warehouses where taxes are more than favorable (or non-existent, if you invest in tech), then the same map will do just fine.

If you are in the market for a fresh 270+ million new consumers with discretionary income, steady jobs, and smartphones at the ready, who live in relatively peaceful, family-friendly countries, then again, all you need is one map to show you where they all live.

From Da Nang on the eastern shore of Vietnam west to Dawei, Myanmar; from Kunming, China to Kuala Lampur, Malaysia; from Bangkok, Thailand to Phnom Penh, Cambodia, this map is an essential, must-have guide for every sales kit.

Right in the crosshairs of it all is where Thailand has elected to plant its 5,000-square-mile (larger than Connecticut), $45 billion Eastern Economic Corridor (EEC). Plunk in the middle of seven nations with a cumulative GDP of nearly $2 trillion.

It’s an opportune mix of the 10-member ASEAN community in varying stages of upward progress. Seven nations where Thailand is the clear leader, flanked by modest countries on the rise (Laos, Cambodia, Myanmar), one country nearly its equal (Malaysia), and one a skyrocket in mid-ignition (Vietnam). Each can play a significant role in the success of the others. Together, they are a formidable new force on the global scene.

The EEC has been pitched to 600 Japanese companies and 1300 in China; commitments, MoUs, and move-ins have ensued.

Japan, with a long tradition of doing business in Thailand, tops all countries with nearly five thousand businesses in Thailand, and leads in foreign direct investment (FDI), followed by Singapore and then China.

However, things could easily flip-flop in view of the Sino-US trade war plus China’s Belt & Road Initiative headed south into the ASEAN. Regardless of way the leadership outcome pans out, it’s a win-win for robotics and automation. 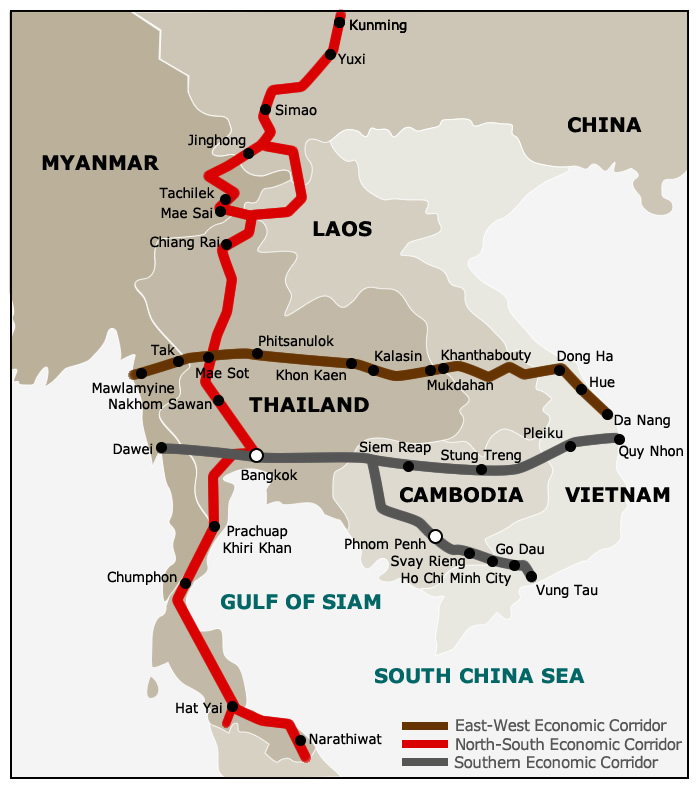 The EEC essentials
Although a flashy promotional video, courtesy of Thailand’s Board of Investment (BOI), depicts a wowsy futuristic EEC replete with a green and digital smart city, sleek transport system and high-rise living and retail spaces, early on it’s going to be the nuts and bolts factories and logistics centers that will power up the massive EEC enterprise.

“The government has identified four “core areas” essential in making the EEC a renowned economic zone: (1) increased and improved infrastructure; (2) business, industrial clusters, and innovation hubs; (3) tourism and; (4) the creation of new cities through smart urban planning. The government predicts the creation of 100,000 jobs a year in the manufacturing and service industry by 2020 through the EEC.”

Infrastructure, business and industrial clusters, and innovation hubs, will be the first order of the EEC buildout.

Central to any of the S-curve targets are robotics and automation.

Infrastructure, Then Everything Else!

Middle-income trap: When “a country’s wage rates have become too high for it to compete against low-wage, low-income nations,
and yet that country lacks sufficient innovation and highly skilled personnel to compete effectively
against the highest tiers of knowledge-intensive products.” —Can Thailand Escape the Middle-income Trap?

So, who’s coming…and what’s the money like?
Alibaba and Cainiao, its logistics arm, are in for $352 million. They’ll build a Smart Digital Hub at Thailand’s U-Tapao International Airport that will feature a fully-automated warehouse for products to be shipped to China and sold on Alibaba’s websites. It will be a clone of its 1.2 million-square-foot warehouse at Malaysia’s Kuala Lumpur International Airport. Amazon, meanwhile, is headed off to Vietnam.

“Alibaba will also assist Thai SMEs to get up to speed up in the digital economy. Alibaba will work with various Thai government agencies and the Alibaba Business School to equip SMEs…with the skills to develop online businesses. SMEs will form an important part of Thailand’s digital economy, which has been valued at $37 billion by 2025.

Alibaba’s Smart Digital Hub is part of a buildout that will see U-Tapao become an “EEC Aeropolis”, or regional aerospace hub anchored by a $338 million joint venture with Airbus. The Airbus facility will handle cargo logistics, manufacturing and aviation training.

18 companies will bid for $1.7 billion worth of contracts to expand Thailand’s Map Thaput deep sea port.

The big-boy Japanese auto makers, Nissan, Mitsubishi Motors, Toyota, Honda, and Mazda, will each expand into EV (electric vehicle) production in Thailand, hoping to duplicate the success each had producing light trucks there. “As its first step into other eco-friendly cars, [Toyota] will start assembling batteries in the EEC’s Chachoengsao this May (2019). Plans are to initially import most of the components and gradually shift to more locally sourced parts.”

The Board of Investment (BOI) reported that overall FDI was up 43 percent higher than the previous year.

Populating with industry a landmass the size of Connecticut (an area larger than 17 Singapores) is a herculean task, but it’s well on its way at doing just that. Although the government’s plan calls for twenty years of buildout, the midpoint could be reached much sooner.

Then again, speed is essential, there’s a lot riding on the “Corridor”, mainly, the future of an entire country.

See also: Part One of a Two-part Article
Thai Robotics & The Godfather’s Backstory
Thai robotics comes of age and the man who made it happen (Introduction to EEC, maps & stats).